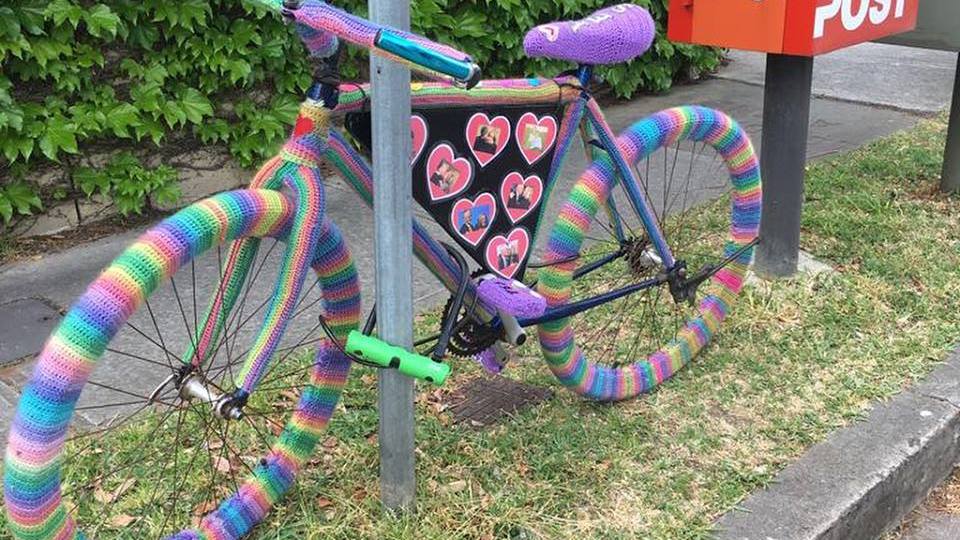 Prime Minister Malcolm Turnbull is searching for the owner of a crocheted YES bike, which was left outside his Sydney home by a woman about two months ago.

Mr Turnbull posted photos of the bike on his Facebook page last night, after Parliament agreed to change the Marriage Act to allow same-sex couples to marry.

He said the “amazing work of art” had been left chained to a street sign.

“We brought it inside to keep it safe. But we don’t know who made it!” he wrote.

As well as the rainbow crochet, someone had also decorated the bike with little love hearts and pictures of Lucy and Malcom over the years.

A sign attached to the bike included a quote from Mr Turnbull on his marriage to wife Lucy.

“Malcolm said marrying Lucy was the ‘best call I ever made bar none … I’m the luckiest guy’,” it said.

“When I first asked Lucy to marry me she said, ‘let’s wait until we grow up’. Well we didn’t wait long and now it is almost impossible to imagine, let alone remember what it was like not to be together, so much so that I have a much clearer sense of ‘Lucy and me,’ than I do of ‘me’.

“Very much we see ourselves as being partners, part of a whole.”

“Bless you and Lucy for taking care of her. A beautiful friend of ours created this. Isn’t it wonderful? She has written to you directly identifying herself.”

Mr Turnbull suggested the bike could be donated to the National Museum or Gallery to commemorate the historic vote.

There had been little doubt that the bill would pass with sweeping support from Nationals, Liberals, Greens, the crossbench and Labor. The Governor-General signed off on it this morning.

People gathered for the vote in the public gallery led a chorus of We Are Australian after the final vote, with members of the Parliament joining in from the floor of the House in tears.

Mr Turnbull said after the bill passed the House of Representatives that he was “so proud that this has occurred while I am Prime Minister while the Liberal and National parties are in Government”.

Couples who have already married overseas will have their relationships recognised in Australia from midnight tonight, and the first same-sex weddings will be able to happen a month from tomorrow.