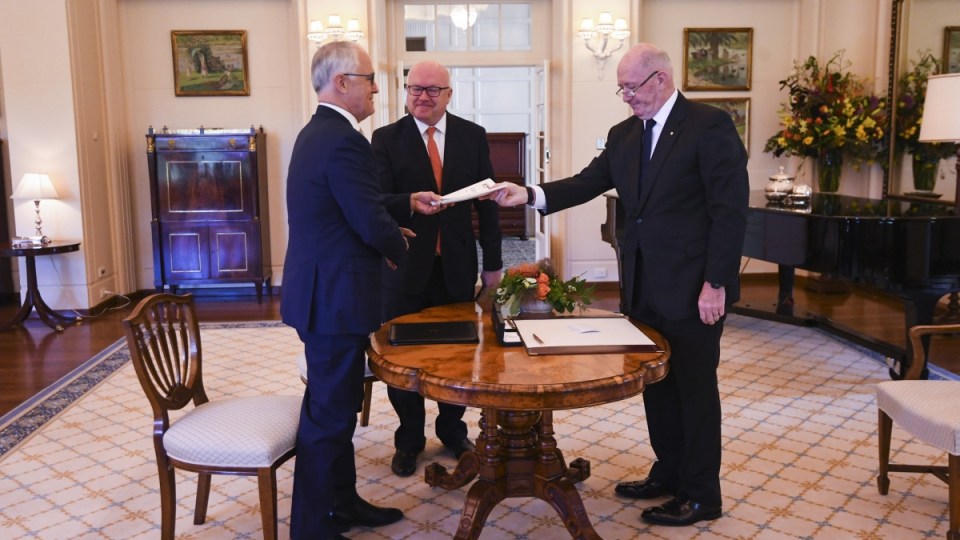 Same-sex couples will be able to marry from early January after the governor-general signed off on new marriage equality laws on Friday.

Sir Peter Cosgrove gave the laws royal assent at 9am when he was visited by Prime Minister Malcolm Turnbull in Canberra.

“I’ve read the act and acknowledged it has been passed by both houses of parliament and also the certification by the attorney general,” he said.

“I assent to this act.

“The act is now passes into Australian law.

“Prime Minister, I suggest we now adjourn and reassemble momentarily for the council to consider the date of the commencement of the act,” he said.

Same-sex couples will be able to lodge formal intentions to wed from Saturday allowing them to marry from January 9 and couples who tied the knot overseas will have their unions officially recognised.

“It is a big Australian hug for all same-sex couples, saying we love and respect you, now go out there and get married,” he told the Seven Network.

Mr Turnbull described the postal survey as a game-changer for the issue, now resolved after years of debate.

He criticised Labor for not progressing the matter when in office but said the victory now belongs to the whole parliament.

The passage of the laws would not put religious freedoms at risk or traditional marriage, he insisted.

“People that think gay people making a commitment is is a threat to her marriage fails to realise that the real threat is lack of commitment,” Mr Turnbull said.

A clearly emotional attorney-general shared a drink with Labor senator Penny Wong after the vote to celebrate.

“To see the galleries of the House of Representatives just explode spontaneously was something that was unforgettable,” Senator George Brandis told ABC radio.

“Of all the things I’ve done since I’ve been in parliament I think this is the one that will be most consequential.”

The new laws cleared parliament unchanged on Thursday evening after a marathon debate lasting 56 hours and despite a push from conservative MPs for additional religious protections.

Only four MPs in the House of Representatives voted against the private bill, a week after the legislation was agreed to by the Senate.