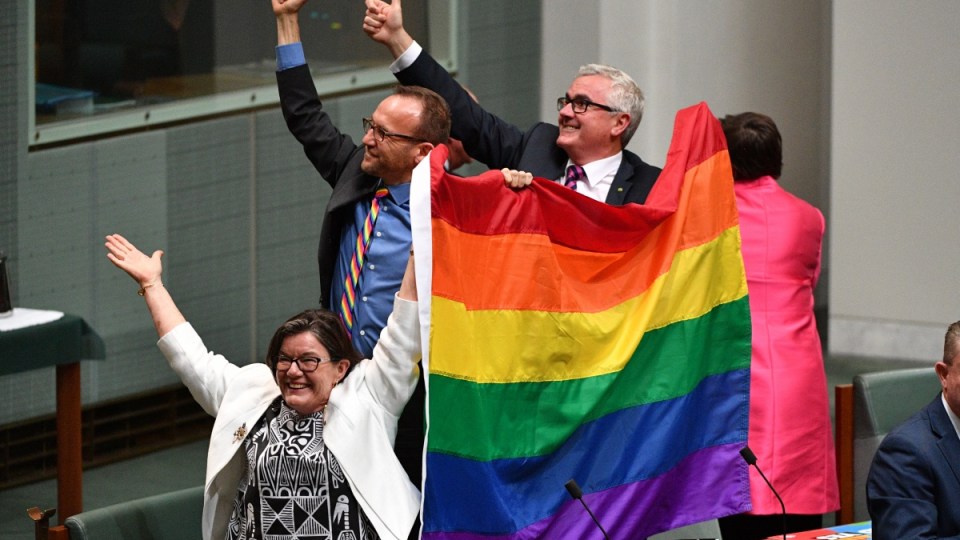 Australia has joined 26 other developed nations in abolishing one of the last legal discriminations against the gay community, paving the way for its first same-sex weddings in January 2018, with Prime Minister Malcolm Turnbull claiming it as a win for his government.

Parliament erupted into cheers, hugs and tears of joy on Thursday night as it voted to pass a bill enabling same-sex marriage, three weeks after almost 62 per cent of voters backed the reform.

With the Governor-General to affirm the bill on Friday, Australia has officially become the 26th nation to legalise same-sex marriage, behind comparable nations like the US, UK, Ireland and New Zealand.

“I am so proud that this has occurred while I’m prime minister, while the Liberal and National parties are in government,” Malcolm Turnbull told ABC’s 7.30.

He also took a swipe at the opposition. “Labor certainly supported it and that’s good. They had six years in office and did nothing about it and that’s not so good. And of course, they did everything they could to stop every Australian having their say and that was really bad.”

“I am so proud this has occurred while I'm Prime Minister," @TurnbullMalcolm says on SSM. Says survey result “a very big hug” for LGBTIQ Aussies. #auspol #abc730 #marriageequality pic.twitter.com/bGDDo18bOo

He appeared not to have heeded Labor leader Bill Shorten’s call for unity. Earlier in Parliament, Mr Shorten said: “It is now a time to heal, a time to build, a time to laugh, a time to embrace, a time to love – and now at last, a time for marriage equality.”

Mr Turnbull downplayed the impact of the national vote on the gay community.

“If you are a young gay person and you are worried about you’re identity … now you know 62 per cent of Australians have voted to say you are equal, we love you, we respect you,” he told the ABC.

Watch the moment the bill passed:

Australia is now in distinguished company. The Netherlands was the first to legalise same-sex marriage in 2001.

“When I watched all of those people go to the ‘yes’ side of the House I thought Canberra was going to tip over,” said comedian Magda Szubanski, a prominent advocate.

Laws discriminating against Australia’s gay community were only gradually repealed in the latter half of the 20th century. Tasmania was the last state to decriminalise homosexuality in 1997. Federally, same-sex couples were not recognised until 2009.

The bill to legalise same-sex marriage would have passed sooner if not for a series of amendments proposed by conservatives, ostensibly to protect religious freedoms. All were defeated.

Unsuccessful amendments included exemptions for civil celebrants, small businesses and religious charities, protections against organisations losing their charitable status if they disagrees with same-sex marriage, and the creation of a secondary class of marriage.

Former Liberal minister Philip Ruddock, now retired, has been tasked by the government with leading an inquiry into appropriate protections for religious groups. He is due to report in March 2018.

The minimum notice period for a marriage under Australian law is 30 days, which means the first same-sex weddings could take place in early January.

A flood of ceremonies are expected in the new year. Australia had about 46,800 same-sex couples in 2016, according to official statistics.