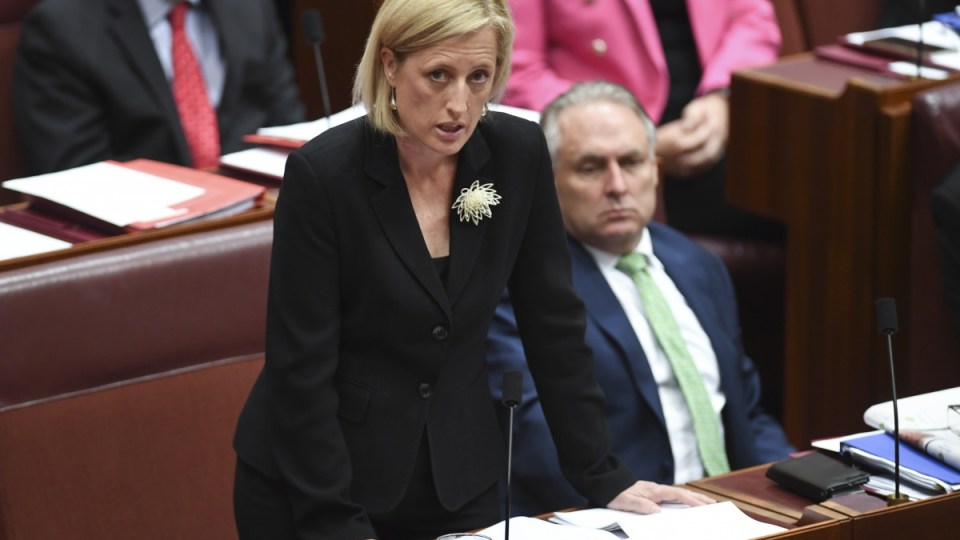 Katy Gallagher has referred herself to the High Court over citizenship uncertainty. Photo: AAP

The Labor Party has referred ACT senator Katy Gallagher to the High Court to decide her eligibility.

But Labor has argued she should not be found ineligible because she took all reasonable steps possible and the British Home Office 118 days to process her renunciation.

Senator Gallagher emphasised in the Senate that she has legal advice that she is eligible.

She said the Coalition has tried to attack her eligibility and reputation and she wanted the matter resolved, which is why she asked for it to be sent to the High Court.

The Government earlier said it would refer Labor Lower House politicians to the High Court if the ALP refused to do it.

Four Labor MPs and crossbencher Rebekha Sharkie have all been caught in the citizenship saga.

Attorney-General George Brandis has demanded Labor leader Bill Shorten “do the right thing and refer them himself”.

Labor’s Tony Burke has conceded that backbencher David Feeney might have to be referred to the High Court because he cannot find paperwork to show that he renounced his British citizenship.

Mr Burke said Labor would make that referral if the documents cannot be found.

But he has resisted demands to refer the other ALP MPs Susan Lamb, Justine Keay and Josh Wilson.

Mr Burke argued they had taken every possible step they could have to renounce their citizenship.

He insisted their fate should not be dependent on how long British officials took to process the paperwork.

“The British Home Office took many, many weeks months to be able to process their applications,” Mr Burke said.

He noted that it processed former Nationals senator Fiona Nash’s renunciation in about three days.

Mr Burke said there could not be a situation on eligibility that was driven “by a junior public servant in Britain”.

‘Mr Burke is trying to throw up a smokescreen’

He said there was no doubt that the Labor MPs had dual citizenship at the time of the 2016 election.

“They were pre-selected more than a year before the 2016 election and yet they did not even initiate the process of renouncing their UK citizenship until after the writs for the 2016 had been issued,” Senator Brandis argued.

“Mr Burke is trying to throw up a smokescreen, what he said is utter rubbish.”

He said the Government would refer the MPs if Labor refused to do so.

“Because the House of Representatives has an obligation to protect its integrity of its own chamber and that means people who are not qualified to have been elected need to have that matter determined, and there is only one way to do that and that is by referral to the High Court,” he said.