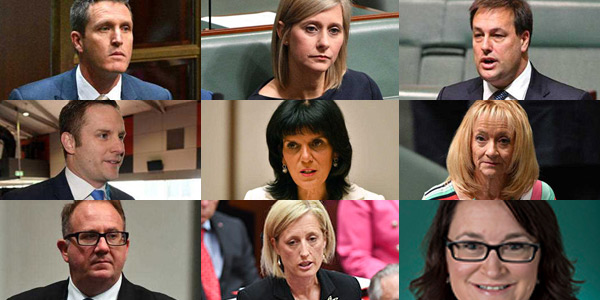 Labor has failed in its bid to refer nine federal MPs to the High Court to clarify their citizenship status and eligibility to sit in Parliament.

But the House of Representatives has referred ALP backbencher David Feeney to the High Court to test his eligibility.

With all five crossbenchers backing Labor, the vote was tied 73-73 – forcing Speaker Tony Smith to give his casting vote to the government, resulting in the motion being defeated 74-73.

After that motion failed, Mr Burke moved the motion to refer Mr Feeney because he cannot find the paperwork to show he renounced British citizenship.

If the High Court rules he was ineligible because he was a dual citizen, there would be a byelection for the marginal inner-Melbourne seat of Batman that Mr Feeney holds.

Labor senator Katy Gallagher was referred to the High Court earlier on Wednesday.

Before question time began, Labor attempted to suspend debate on the same-sex marriage bill in the lower house in order to move that the nine MPs be referred. The attempt was interrupted by the beginning of question time.

The government’s numbers were boosted by the return of Deputy Prime Minister Barnaby Joyce, who returned to Parliament on Wednesday following a successful byelection.

During question time, Labor leader Bill Shorten asked Prime Minister Malcolm Turnbull if he would work with Labor and the crossbench.

“The Australian people are sick of this constitutional crisis. The only way to resolve this citizenship crisis with the cooperation of all sides of Parliament,” Mr Shorten said.

Mr Turnbull replied that the Australian people were in fact “sick of the dishonesty, the twists and turns of the Leader of the Opposition”.

The Greens have also attacked Mr Turnbull for resisting the referral of more members of his own party to the High Court.

“The only way this is going to be resolved is if every member of this Parliament with a question mark hanging over their head is referred to the High Court,” Mr Di Natale said in the Senate.

Why the nine MPs are in doubt

David Feeney: Will ask to be referred to the High Court on Thursday if documents relating to his UK citizenship renunciation can’t be found. A by-election in his Melbourne seat of Batman looms.

Justine Keay: Acquired British citizenship through her father, but citizenship renunciation from UK Home Office is dated July 8, 2016 and might be too late.

Josh Wilson: Born in Britain but citizenship renunciation from UK Home Office is dated June 24, 2016 and might be too late.

Susan Lamb: Acquired British citizenship by descent through her Scottish born father, attempted to have it renounced but application refused on August 10, 2016.

Julia Banks: Father born in Greece along with all four grandparents. Greek Embassy does not have her registered on Greek municipal records, a requirement of being a citizen.

Jason Falinski: Has sought further legal advice after being unable to ascertain whether his USSR-born father, Polish and British born grandfathers and Leningrad-born grandmother conferred foreign citizenship on him. Labor frontbenchers are split on whether Falinkski and Frydenberg should be referred.

Alex Hawke: Mother and maternal grandparents were born in Greece. Greek Embassy does not have him registered on Greek municipal records, a requirement of being a citizen.

Nola Marino: Father born in the US, Italian paternal grandparents and a Swedish born maternal grandfather and Italian husband. Her declaration says she’s checked websites and sought legal advice, but thinks she’s in the clear.

Rebekha Sharkie: Born in the UK. Her mother was born in the US but didn’t spend enough time there to pass on citizenship. Renounced British citizenship on April 19, 2016 but renunciation was registered with the UK Home Office on June 29, 2016.