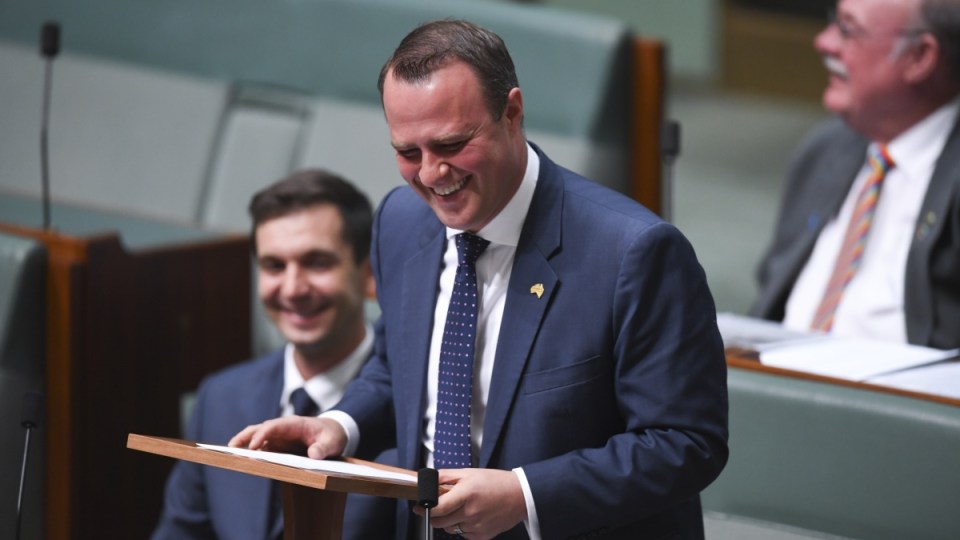 Liberal MP Tim Wilson asked his partner to marry him during a speech to Parliament. Photo: AAP

“So there’s only one thing left to do,” Liberal MP Tim Wilson told Parliament. He paused for a quick gulp of air.

“Ryan Patrick Bolger, will you marry me?”

The answer from Ryan, who was sitting in the public gallery alongside marriage-equality advocates on Monday morning, was a beaming “Yes”.

Deputy speaker Rob Mitchell noted it for the Hansard. “Well done, mate,” he said in his typically casual style.

Labor frontbencher Mark Dreyfus began his contribution with “congratulations”, while Greens senator Sarah Hanson-Young, who was watching on from the side of the chamber, tweeted her delight.

Congratulations @timwilsoncomau who just asked his partner Ryan to marry him on the floor of the Parliament. 💕💚❤️💙💜

Update: We've dug through Hansard and @timwilsoncomau appears to be the first ever Member to propose on the floor of the House. pic.twitter.com/NLGLxpYIrm

And Ryan’s answer mirrored the response the Australian people gave same-sex couples during the marriage-equality postal survey that is expected to see the social reform enacted this week.

Earlier in his speech, Mr Wilson recounted how he had proposed once before to Ryan, at a time when the chance of a gay wedding in Australia was not yet a possibility.

“Thankfully, the answer was yes. I also remember the bitter-sweetness of the days that followed,” he told Parliament.

The Liberal MP said that despite the support of loved ones, many others “simply did not know how to react”.

“In conversation, other people politely changed the topic or fell silent entirely,” he said.

“For a while, Ryan kept pushing for an engagement party. The truth is I kept delaying it, perhaps wrongly, because the strong message I took from so many people’s silence was that no one would come.

“On informing one person of our news, one person responded, ‘Why bother?’ At the time I fell silent, and I’ve never had an answer to that question.

“But the Australian people have now answered it for me.”

The bill to legalise same-sex marriage was introduced to the lower house on Monday after passing the Senate last Wednesday.

Maverick Liberal MP Warren Entsch, a veteran gay rights advocate within the Parliament, introduced the bill, telling Parliament the bill would “take from no one”.

‘It simply makes a nation a kinder and fairer place,” he said.

“Delaying equality for every Australian, whether they be from Bundaberg or Fremantle, is simply not good enough.”

Prime Minister Malcolm Turnbull lauded the postal survey process, in which more than 80 per cent of the electorate participated.

“The postal survey gave the ultimate democratic seal to this historic change,” he told Parliament.

“Most of all, to same-sex couples in Australia, you are equal, you are respected, you are loved.”

The Prime Minister confirmed he would support a number of amendments to the bill aimed at bolstering religious freedom.

He said this week’s debate “belongs to all those who have waited”.

“We have come too late to this moment, but we are here at last.”