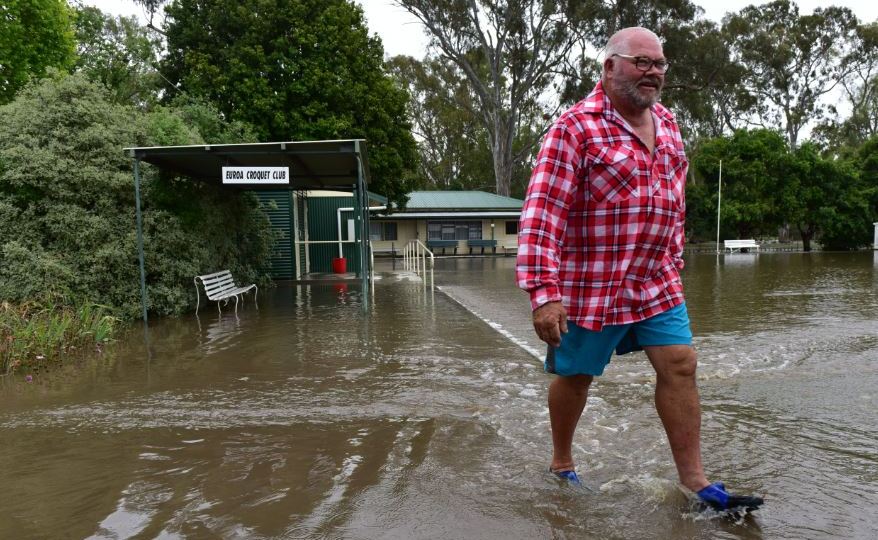 Play cancelled: somewhere under that brown water are the manicured greens of the Euroa Bowling Club. AAP/Brendan McCarthy

More than a century of daily record rainfalls have been smashed by huge falls in Victoria’s north and northeast – and now it’s southern NSW’s turn for a drenching.

In Echuca, near the border of NSW, more than 123mm of rain fell overnight until 9am on Saturday, breaking the 159-year-old daily rain record, Bureau of Metereology figures show.

Other record-breaking falls were recorded in Euroa, which had 146mm of rain, breaking 132 years of records in the town and Eildon received 149mm, the highest recorded in 131 years.

“Over the past 48 hours we’ve seen the development of a very large and quite intense weather event across southeastern Australia…Victoria has borne the brunt of it,” Mr Williams said.

Areas such as Strathbogie, Stanhope and Mt Bulla were also setting new records.

Parts of NSW are expected to cop a drenching with communities warned to prepare for possible flash flooding.

Two severe weather warnings are currently affecting the state, with heavy rain and flash flooding expected in the Snowy Mountains, south coast and central west and severe thunderstorms with damaging winds forecast for Gosford, Sydney and the central west.

“The tropical nature of this trough has been affecting Victoria and is associated with what is happening there,” Bureau of Meteorology meteorologist Jordan Notara told AAP on Saturday.

Some areas can expect up to 200mm of rain on Saturday night as the tropical low moves through the south of the state.

Flood warnings are in place for Murrumbidgee and Murray rivers with southern and central NSW on flood watch.

Yalgogrin North in the Riverina copped 95mm of rain from 9am on Saturday morning.

The worst of the weather is expected on Saturday night with rain set to ease on Sunday, Mr Notara says.

But, the east coast of NSW should prepare for a possible east coast low which could hit on Tuesday.

Such a weather event could see gale or storm force winds along the coast, widespread heavy rain, rough seas and dangerous surf.

“We’re seeing this trough off the NSW coast becoming an east coast low on Tuesday and Wednesday,” Mr Notara said.

The exact position is unknown at the moment but it will continue to be monitored by the bureau.