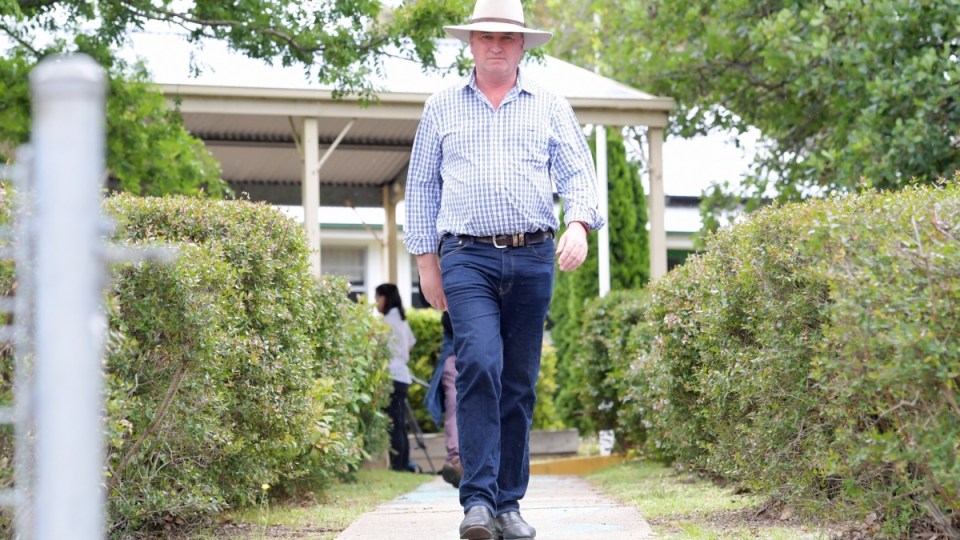 Mr Joyce says he's eager to get back to Canberra. Photo: AAP

Barnaby Joyce, alongside his parents, has cast his vote in the New England byelection at his old primary school in the region’s rural heartland.

He also issued a stern warning to agitators in the Coalition, which is facing division between the National and Liberal partners.

Mr Joyce, along with father James and mother Marie, voted at Woolbrook Public School on Saturday afternoon while the rest of the electorate’s approximately 110,000 voters did the same at polling booths across the region.

Mr Joyce said returning to his roots was a chance to show he would keep fighting for rural inhabitants in the “weatherboard and iron” communities.

“What people ask for in these communities are things like mobile phone reception, some sort of parity in their opportunities. They want you to seal their roads, to stop the centralisation of services away from them,” he told reporters outside the school on Saturday.

He joked being school captain was now the highest office he held since being ousted from the position of deputy prime minister in late October.

Mr Joyce, the overwhelming favourite in the byelection, said it was very important to return to Canberra to continue his work.

He acknowledged towns in Victoria which are at risk of flooding and urged his political colleagues to greenlight the regional investment corporation bill to inject financial aid to rural communities in times of hardship.

When asked if he’d like to send a message to his Coalition colleagues who have pushed for Prime Minister Malcolm Turnbull to resign, Mr Joyce fired back quickly “I’ll be back tomorrow”.

Mr Joyce has apologised to the electorate for putting them through the snap by-election because of his inherited New Zealand citizenship, but said it would not be surprising if more MPs were found ineligible.

He is facing off against 16 opponents, but without a singularly prominent rival, analysts expect him to comfortably regain his seat.

‘I’ll be back tomorrow’: a confident Barnaby Joyce votes for his return to Canberra