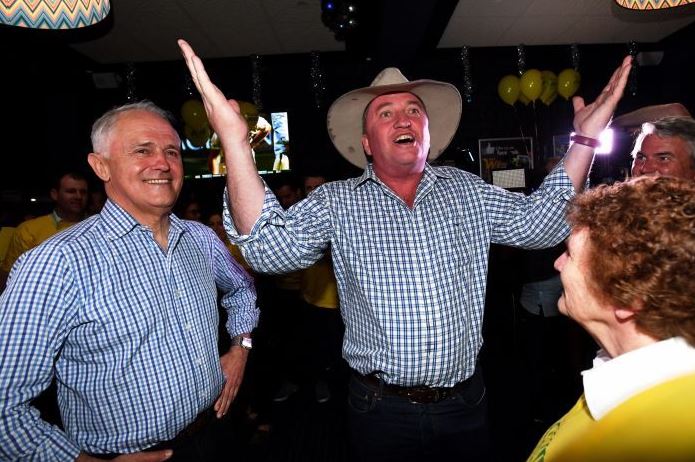 A jubilant Barnaby Joyce has declared himself the winner of his byelection bid to re-claim the federal seat of New England – and the ABC’s election analyst Antony Green says there is no reason to doubt him.

On the strength of the early vote tally Mr Joyce – who quipped “I never take anything for granted” – is projected to win a primary vote of about 62 per cent, a big jump from his 52.3 per cent primary at the last federal election.

“I say to the people of New England: I never take anything for granted,” he said

“For every person who voted for us … I just want to say how completely and utterly humbled I am.

“Thank you very much. I hold you as close to my heart as I possibly could.”

Nationals are crediting a low-profile, locally focused campaign for the big swing with party president Larry Anthony saying it could be the biggest swing in history.

“Barnaby Joyce has been elected with what appears to be a record in the history of byelections in Australia,” Prime Minister Malcolm Turnbull said.

The byelection was held because the High Court disqualified Mr Joyce from parliament for being a dual citizen through his New Zealand-born father.

Saturday’s strong result is likely to mean a speedy return to parliament for Mr Joyce, who was away while some of his Nationals colleagues went rogue.

The rebels agitated for a banking inquiry and criticised Prime Minster Malcolm Turnbull for his leadership on same-sex marriage.

One of those agitators,  George Christensen, met yesterday with Mr Joyce, who said the north Queensland MP had affirmed his allegiance to the party with the return of Mr Joyce and the announcement of the banking royal commission, which he advocated.

The byelection campaign was dirty at times.

Even as voters went to the polls on Saturday, a town hall in Armidale was covered with graffiti reading, “No Barnaby Joyce”.

Around 70,000 people cast their ballots at 95 polling locations in the seat of New England.

Mr Joyce had been expected to comfortably win the New England seat and welcomed back into federal parliament after the High Court disqualified him for his dual citizenship status.

The once and future Deputy Prime Minister won the seat in last year’s election against his greatest rival, independent former MP, Tony Windsor.

In October the High Court revealed he had been ineligible to be elected to parliament and was forced to renounce his New Zealand citizenship and run for office again.

Mr Joyce has held the regional seat of New England since 2013 after serving as a Queensland Senator.

The Turnbull Government has watched eagerly for the results with the byelection capable of stripping the government of its majority in parliament.

Mr Turnbull currently has a majority of just one seat in the House of Representatives.

The campaign trail has also sparked drama for the former Nationals leader, who claimed he had been “stalked” and received “death threats”.

Fairfax media reported Mr Joyce was confronted by a man in an Inverall hotel on Monday night and was quizzed about his private life.

“The campaign is becoming dirty and people are sending people around to stank you.

“That’s disappointing, you know. I’ll be frank, they’re not coming from the Labor party, and they’re coming from other people.”