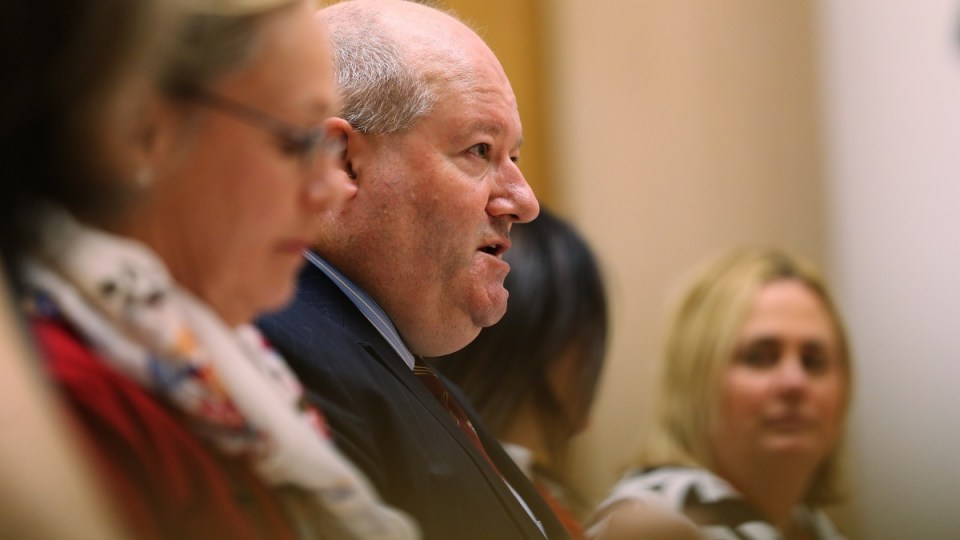 The man who exposed the Commonwealth Bank’s financial planning scandal has described the Turnbull government’s plan for a royal commission as a “put-up job” and a “joke”.

As pressure mounted on Thursday morning, Mr Turnbull announced the government would establish a $75 million, 12-month royal commission into the banking industry.

But the government’s dramatic backflip was not enough to satisfy Jeff Morris, a former financial planner who received death threats and lost his job after blowing the whistle on corruption at the Commonwealth Bank.

Speaking to the The New Daily on Thursday, Mr Morris labelled the plan for a 12-month inquiry “a joke”.

“The turgid and dishonest conduct of the banks will take many years to uncover fully,” he said.

“Clearly what this says is there’s no interest in uncovering it.

“This is a put-up job by Turnbull and the banks to make out they’ve had a royal commission and hold a little farcical inquiry and move on.”

Despite his criticisms, Mr Morris, whose testimony led to a damning Senate inquiry into the financial planning arm of the Commonwealth Bank, said momentum would build for an expanded inquiry “once the corruption and dishonesty starts to be exposed”.

“I’m heartened because I’m convinced this is the thin edge of the wedge,” he said.

Describing the decision as a “regrettable but necessary action”, Mr Turnbull said the inquiry would “not be an open-ended commission”.

He said the government was “taking control” so the process was not subject to politicking.

“This should not be a commission that runs forever, costing many hundreds of millions of dollars, as would’ve been the case under some of the proposals,” he said.

The commission will examine misconduct in the banking, superannuation and financial services industry, according to the draft terms of reference.

The commission’s remit is tighter than the inquiry proposed by the Nationals and backed by Labor and the crossbench, but still represents an expansive, landmark investigation into the country’s financial sector.

As banking shares tumbled on Thursday afternoon, the move was welcomed by banking royal commission advocates within the Nationals, including Barry O’Sullivan, John ‘Wacka’ Williams and George Christensen.

Mr Christensen said Mr Turnbull had been dragged “kicking and screaming” to the decision.

Labor leader Bill Shorten said Mr Turnbull was “a reluctant conscript to a banking royal commission” and demanded the terms of reference were not “sabotaged by a cosy sweetheart deal” with the banks.

Greens finance spokesman Peter Whish-Wilson, who first called for a banking royal commission in 2015, said the public would not accept a narrow probe.

Maverick independent MP Bob Katter described the government’s backdown as a “win for the Australian people”.

“But the question remains of whether it’s a pyrrhic victory or not,” he told The New Daily.

“The battle next week is to whether we can force him to do it our way, or whether he’ll get away with doing it his way.”

Mr Katter argued the commissioner should be a “representative of the people”, not a former judge as planned.

“Tim Costello leaps to mind, or Father Frank Brennan. I disagree with these blokes on a lot of things but they are people trusted not to be in the pockets of the banks,” he said.

Liberal backbench MP Craig Kelly lamented the move to a royal commission, telling The New Daily there would be “unintended consequences” for overseas confidence in Australia’s banking sector.

“The banks have essentially called a royal commission on themselves, which left the PM with no alternative,” he said.

Merilyn Swan, whose elderly parents were left bankrupt about eight years ago after investing with the Commonwealth Bank, was delighted the government had moved towards a royal commission.

“It’s about time, for goodness sake,” she told The New Daily.

But she described the plan for a 12-month inquiry as “political expediency” and urged the government to provide protections for whistleblowers.

Ms Swan said her mum and dad, who were aged 74 and 83 at the time, suffered a huge mental and physical toll after their experience with CBA.

Despite losing 67 per cent of their $250,000 investment, which was wrongly placed in a high-risk portfolio, Ms Swan chased CBA for 12 months only to be offered a $6670 settlement in which the bank accepted no liability.

After Ms Swan took on the bank with the help of Mr Morris, it settled six months later for $95,000.

“My dad never thought he would see the day when a royal commission would finally be called,” she said.

Turnbull’s banking royal commission a ‘put up job’ and a ‘joke’, says whistleblower