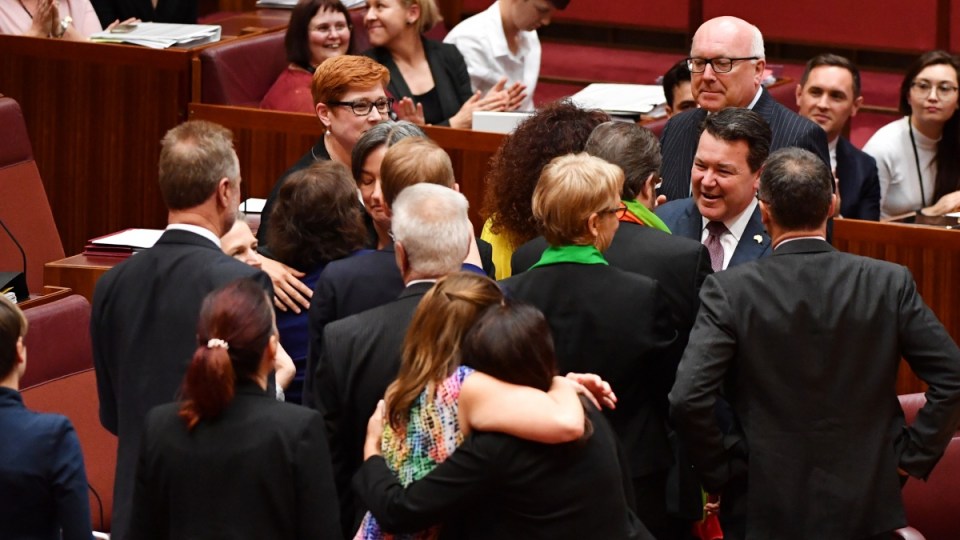 The senate passed a bill to legislate same-sex marriage, paving the way for a lower house vote. Photo: AAP

A bill for same-sex marriage has passed the Senate, paving the way for a vote in the lower house next week that is expected to give effect to the historic reform.

About 1.30pm on Wednesday, the Senate voted 43-12 to pass the bill penned by Liberal senator Dean Smith that would allow same-sex couples to marry.

When the vote was declared won by Senate president Scott Ryan, senators embraced each other, and applause and cheers rang out in the chamber.

Leading ‘Yes’ campaigners watched on from the floor of the Senate, while those in the gallery gave a standing ovation.

“Unlike so much of what characterises modern politics, this is not triumph of one politician over another or even one party over another,” said Senator Smith, who is gay and has led the push for same-sex marriage within the Coalition from the backbench.

“Instead, it has restored faith in our Parliament and in this Senate.”

Watch the emotional celebration in the Senate

The government’s leader in the Senate, George Brandis, said that next week in the House of Representatives we “will see this historic change accomplished”.

“I am so delighted that the result was an overwhelming ‘Yes’. I am so proud of Australian democracy today. More proud than I have ever been,” he said.

“Nobody owns this result but the Australian people themselves.”

Labor’s leader in the Senate Penny Wong, who is gay and the leading campaigner for same-sex marriage within the opposition, said the country stood “on the cusp of a remarkable achievement”.

“Every day it is a great privilege to stand in this place, but there are some days which are a great moment, which change our country for the better,” she said.

Senator Smith said the impact of the reform would be felt around the country.

“Like much of what we do here, most of the real winners we will never meet,” he said.

“We will never truly know what it means for the young Australian boy or girl who is working out that they are gay or lesbian or intersex or transgender. They will quickly realise they have nothing to fear.

“We will never meet the thousands of families that will bless their children at marriage ceremonies that will occur because of this bill.”

Liberal Senator Dean Smith: I commend this bill and move for it to be read a third time. MORE: https://t.co/gB3traaAjm pic.twitter.com/C0gr9WZt2G

Richard Di Natale, the leader of the Greens, which have long advocated for same-sex marriage, said the vote was “a great moment in history”.

The bill was introduced into the Senate earlier in the month by a cross-party group of senators that included Coalition moderates, Labor, the Greens, the NXT and Derryn Hinch.

On the final vote on Wednesday, it won the support of a number of ‘No’ voting senators who wanted to reflect the result of the postal survey, including Finance Minister Mathias Cormann.

It passed the Senate unchanged after a block of senators – including moderate Coalition senators, Labor, the Greens, the NXT and Derryn Hinch – joined forces to defeat a series of amendments.

Those aimed at providing increased protections, including measures such as allowing civil celebrants to refuse to perform gay weddings.

The House of Representatives is expected to begin debating the bill next Monday. The government hopes it will pass by the end of next week.

A number of prominent ‘No’ campaigners also spoke as the final Senate vote approached, including Tasmanian Liberal senator Eric Abetz, who urged lower house MPs to support the amendments that the Senate had rejected.