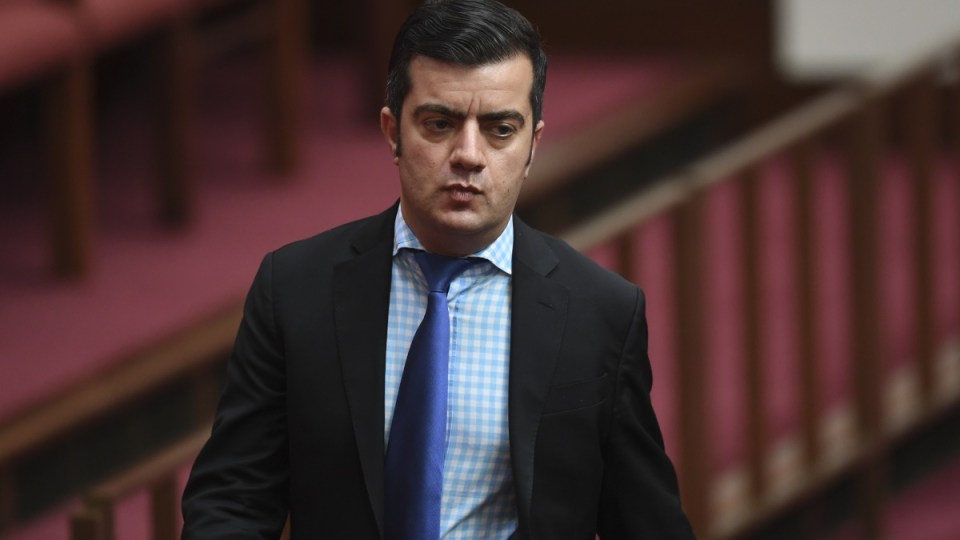 Sam Dastyari gives a carefully constructed defence of China's policy in the South China Sea in the recording. Photo: AAP

“I told Senator Dastyari that his mischaracterisation of how he came to make comments contradicting Labor policy made his position untenable,” Mr Shorten said in a statement on Thursday.

“I also told him that while I accept his word that he never had, nor disclosed, any classified information, his handling of these matters showed a lack of judgment.”

The move comes after newly released recording of Senator  Dastyari addressing a gathering of Chinese media in Sydney revealed he offered a detailed defence of China’s policy in the South China Sea, in defiance of official ALP policy.

Four months ago, Senator Dastyari admitted to the ABC’s Australian Story that he had given the “wrong answer” on a question about the South China Sea, characterising it as a question he should not have taken, and saying he “mumbled it and answered it incorrectly”.

However, the explosive audio recording obtained by the ABC reveals that Senator Dastyari’s remarks were not mumbled but prepared, and far more outspoken than he has previously admitted.

Standing next to a wealthy Chinese businessman and ALP donor, Senator Dastyari backed the Chinese government’s refusal to abide by international court rulings on the South China Sea, stating that: “The Chinese integrity of its borders is a matter for China.”

“The role that Australia should be playing as a friend is to know that we see several thousand years of history, thousands of years of history, where it is and isn’t our place to be involved,” he said in the recording.

“And as a supporter of China, and a friend of China, the Australian Labor Party is playing an important role in maintaining that relationship.

“And the best way of maintaining that relationship is knowing when it is and isn’t our place to be involved.”

In a speech to the National Press Club, Senator Conroy criticised China over its incursions into the South China Sea, describing Beijing’s territorial claims and artificial island-building in the region as destabilising and “absurd”.

Senator Conroy said if elected to government, Labor would show its resolve to counter China’s perceived aggression in the region.

“We believe our defence force should be able to conduct freedom of navigation operations consistent with international law,” he said.

About $5 trillion in ship-borne trade passes every year though the energy-rich, strategic waters, which hold rich oil, gas and fishing resources.

Prior to Wednesday’s emergence of the audio recording, the only verifiable record of the media conference was a single photo of Dastyari at the podium, flanked by billionaire political donor and property developer Huang Xiangmo.

The only evidence that Senator Dastyari had made pro-Beijing comments at the press conference was a single quote in a Chinese language newspaper report.

Senator Dastyari has variously suggested this quote was misreported or that it showed he had given a spontaneous, mumbled answer to a question.

That reported quote was: “The South China Sea is China’s own affair. On this issue, Australia should remain neutral and respect China’s decision.”

The newly revealed recording of what Senator Dastyari actually said suggests he consciously sought to inject support for Beijing’s territorial plans into his remarks that day.

The ABC on Wednesday sent Senator Dastyari detailed questions about the remarks he made to the Chinese media, and why he said them.

In a brief statement on Wednesday afternoon, the senator replied: “In September last year, I resigned from the ALP frontbench, over comments I made at a 17 June press conference which were wrong and not consistent with ALP policy. I have acknowledged this a number of times previously. I paid a price for this error.”

‘Were you doing Mr Huang a favour?’

In an extensive interview with Australian Story earlier this year, Senator Dastyari said he had been unaware of what exactly Senator Conroy had said the day before he expressed his own views to the Chinese media.

“I don’t recall being aware of any specifics at that point in time of when and how Stephen Conroy had made comments and what Stephen Conroy did and didn’t say,” Senator Dastyari told the ABC at the time.

In June this year, the ABC reported that Mr Huang Xiangmo had promised to give $400,000 to the Labor Party, but cancelled the donation when he heard what Senator Conroy had said.

On Australian Story, Senator Dastyari denied he had made his remarks in order to persuade Mr Huang to change his mind, or, that he was doing Mr Huang a favour by making the remarks he did at their joint press conference.

“Mr Huang has never asked me for anything, and I’ve never done anything for him,” he said.

“I don’t remember having any conversation with Mr Huang about any foreign policy issue ever.”

Senator Dastyari denied he was trying to ensure that Mr Huang gave Labor the $400,000 donation that – reportedly – he had promised to give the party.

“I’m not aware of this donation and even if that allegation was to have any semblance of truth, from what you’re now saying and others are saying it was a donation that was never delivered anyway,” he told the program.

In a statement to the ABC in June, Mr Huang Xiangmo said: “I take strong exception to any claim that I have linked my political donations to foreign policy outcomes. I expect nothing in return.”

Senator Dastyari insisted that the media conference given to the Chinese media had been arranged some time before, in order to address the question of Safe Schools, and the fact that it had taken place the day after Senator Conroy’s remarks was coincidental.

“I held a press conference to talk specifically about the issue of Safe Schools … as you can imagine in these kinds of press conference other questions get thrown at you,” Senator Dastyari told Australian Story previously.

“I gave the wrong answer to a complicated foreign policy question that I was naïve enough and perhaps silly enough to take.”

Beijing’s claims to disputed territories are based partly on evidence it says shows ancient historical rights.

Senator Dastyari’s assertion that “the role that Australia should be playing as a friend is to know that we see several thousand years of history, where it is and isn’t our place to be involved,” gives credence to the claims by China’s Communist leader.

Earlier on Wednesday, Fairfax Media reported that Senator Dastyari warned Mr Huang Xiangmo that his phone was probably being tapped by US agencies in a secret face to face meeting between the pair last October.

The meeting allegedly occurred after Senator Dastyari quit the frontbench in September 2016 and after senior Labor officials had received briefings from ASIO that Mr Huang was of interest to the agency over his opaque links to the Chinese government.

According to Fairfax Media, details of the phone tap warning and other dealings involving the pair have been collected by national security officials.

ASIO is conducting an exhaustive investigation into Mr Huang’s application to become an Australian citizen and, Fairfax Media reports, national security officials interviewed him earlier this year at a secure Sydney CBD location.

During the October 2016 meeting at Huang Xiangmo’s Mosman mansion, Senator Dastyari reportedly warned Mr Huang that his mobile phone was being intercepted. Mr Dastyari had driven to Mr Huang’s home on Sydney’s north shore to meet him.

“The last conversation I had with Mr Huang would have been around about September last year, and that’s the last contact I had with him,” Senator Dastyari told Australian Story in July.

“I said [to Mr Huang], ‘There’s all this media controversy around our relationship and I believe it’s best that we no longer maintain this relationship’.”

Senator Dastyari said the conversation came at the end of a “fairly large media storm” and that Mr Huang was “probably relieved” by the severing of the relationship.

Asked by Fairfax Media why he had told Mr Huang his phone was tapped, Senator Dastyari issued a statement saying: “I reject any assertion that I did anything other than put to Mr Huang gossip being spread by journalists.”

Senator Dastyari now faces additional questions about when and if Mr Shorten warned him of concerns ASIO had about Mr Huang and his alleged connections to China’s Communist government.

In his interview with Australian Story, Senator Dastyari emphatically denied that these warnings had been passed on to him.

“At no point was any warning that was given by ASIO or any security agency in 2015 to any party official passed on to me,” he said.

“At no point was anything passed on to me.”

‘There’s no coming back’ from political donations promises

Senator Dastyari resigned from Labor’s opposition frontbench in September last year, after accepting that he had made a mistake in accepting funds from Mr Huang’s property development company, the Yuhu Group, to pay a legal bill in 2014, and funds from a company with reported links to the Chinese government to cover an office travel expense.

Both payments were declared by Senator Dastyari.

Prime Minister Malcolm Turnbull hit out at the senator at the time, saying: “He has to explain, is the Labor Party’s foreign policy for sale? Was this cash for comment?”

“It’s very important when you’re a party official to make sure you make it perfectly clear to people at every point in time that in no way, shape or form can you engage in outcomes for donations, because once you head that down that path there’s no coming back.”