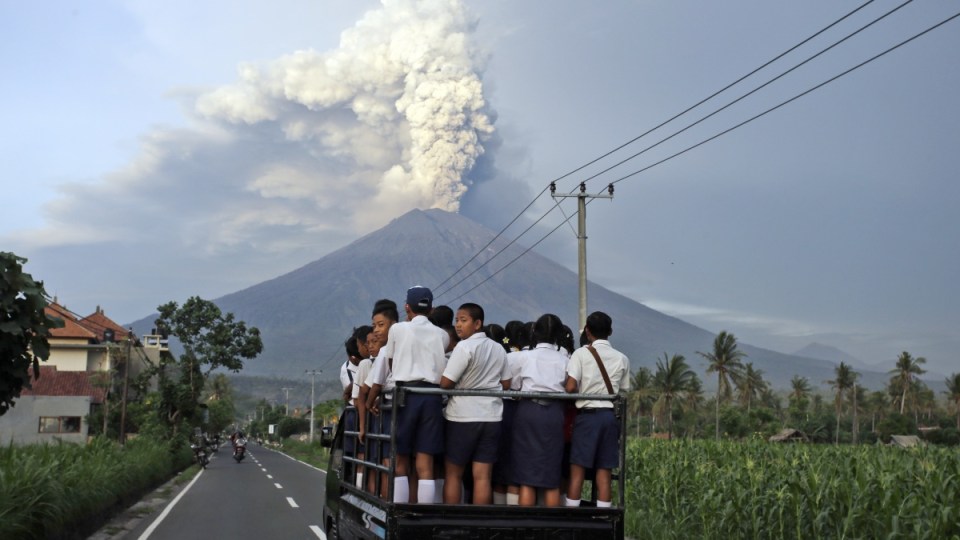 Australian travellers face another day of disruptions caused by the eruption of Bali’s Mount Agung volcano.

Wednesday’s Qantas, Jetstar and Virgin flights to and from Bali have been cancelled due to an ash cloud created by the volcano, which scientists have predicted could become more active over coming days.

Other airlines are monitoring the situation and Denpasar Airport remains closed, while Indonesian authorities ordered 100,000 residents who live near the volcano to evacuate.

Passengers have been given the option of flying to other destinations including Phuket, Singapore, Fiji or Tokyo.

Australian travel insurance companies have also warned customers would only be covered if they bought policies up to nine weeks ago – before warnings were issued by the Indonesian government.

Some have stipulated a cut-off coverage date of September 22, which was when the Indonesian volcano alert was first raised to level four, suggesting an eruption was imminent.

Others, including Australia largest insurer Cover-More, are refusing to cover travellers who purchased a policy on or after September 18 when the alert was raised from normal to “vigilance”.

Young Australian school leavers stranded in Bali due to an ash cloud say they’ve been abandoned by their travel insurance companies.

Insurers have limited financial and other support for Australians trapped on Indonesian resort island of Bali, in the shadow of the smoking volcano, which could produce a full lava eruption at any moment.

The international airport on Bali is likely to remain closed for a second day on Wednesday, and airlines have cancelled inbound and outbound flights due to the danger posed by the ash cloud.

Thousands of Australians, including schoolies who headed to Bali after finishing their final exams, have been caught on the island since Sunday. They are now concerned about running out of money for food and accommodation as they wait to find out how and when they will get home.

A worried Emily Martin, 19, is on her first overseas trip without her family.

“They don’t really tell you that you’re not covered by the insurance for the volcano, you’re just left in the dark,” she told AAP in Bali on Tuesday.

Her friend Dannielle Hicks, also 19, was reduced to tears when she realised she would run out of money in a foreign country.

The grounding of flights to and from Australia coincided with Schoolies Week when an estimated 6000 teens flocked to the island.

Red Frogs, an Australian support network for post-school partygoers on Bali, is trying to help the teenagers as best it can.

“We’ve spoken to a number of school leavers who have concerns about not being able to get home,” locations leader Nickey Bright told AAP.

Some other insurance companies have said they would allow travellers to make claim if they purchased their insurance before November 22.

Travellers have been advised to consult their policies and insurance company websites to check their coverage.