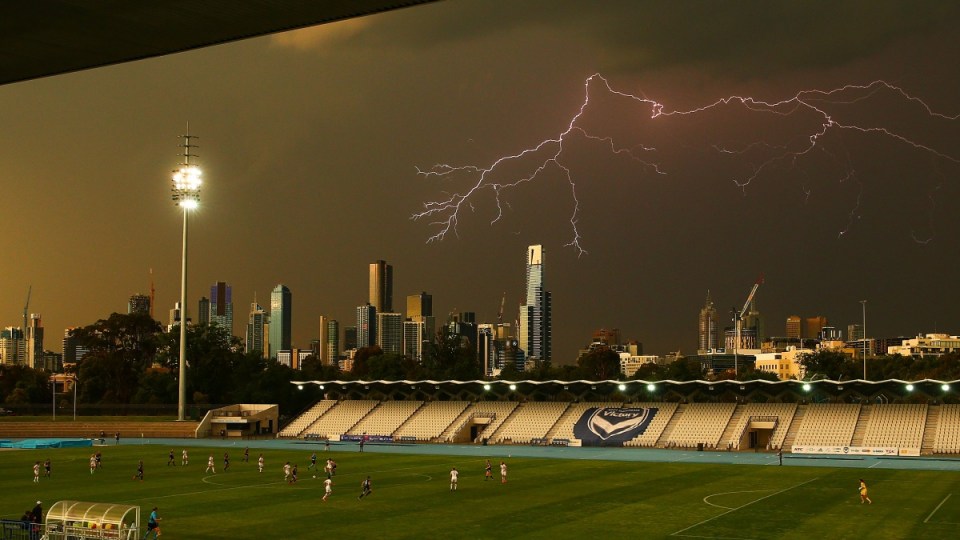 Melbourne is currently experiencing a higher than normal rate of thunderstorms. Photo: Getty

The Bureau of Meteorology has warned more severe thunderstorms are brewing across the country for Sunday afternoon and evening, after a lightning strike killed a woman in her 20s on Friday evening.

The woman died inMelbourne’s Maroondah Hospital overnight after she was struck by lightning watching the storm from the Sunset Drive lookout at Chirnside Park just after 8.30pm.

The man, also in his 20s, was in a critical but stable condition on Saturday afternoon.

The tragic lightning accident follows a West Australian man dying in hospital last week after he was struck by lightning.

Doug Fernihough, 57, was filling divots at Northam Race Course on November 16 when he was hit by lightning and suffered a heart attack and internal injuries.

Bureau of Meteorology senior forecaster Scott Williams said Sunday thunderstorms could produce considerable lightning, large hail and rapid rain rates of 30 millimetres in one hour in Melbourne and along the eastern part of Victoria.

“It’s a pretty active time around the country. A lot of the action around the top end, to the centre, has been tropical moisture feeding down to Victoria,” he said.

The forecaster said there had been an “unprecedented spell” of storms in Melbourne in recent weeks.

“There was a tremendous amount of lightning and there were 15,000 overall (lightning) strikes (on Friday),” Mr Williams said. “That’s a lot to observe in a small region.”

He said a slow moving weather pattern with a large high-pressure system from the east had brought humid tropical air down from the Gulf of Carpentaria.

“The storm cells became more active when northerly winds were driving them down here and clashed with the sea breeze.

“Those two winds coming together were converging over the northern suburbs of Melbourne and helped to boost the strength of those storms and continued to move southwards.”

The dangers of lightning on the human body

As spectacular as it is to watch a lightning storm, University of Queensland Associate Professor Chris Andrews, a medical practitioner, electrical engineer and ‘lightning expert’ told The New Daily it was important to stay indoors.

Reports suggest the woman who died in Friday’s thunderstorm was watching the lightning flashes next to a tree.

Dr Andrews said sadly the most dangerous thing to do was to take shelter under a tree during a lightning storm.

“When a tree is hit, it acts as a conductor to the ground and the lightning can jump across from the tree to anyone standing near it,” he said, adding a tall building or flagpole posed the same risk.

Dr Andrews said Australia was fortunate to have only about 10 lightning fatalities per year, and estimated this figure accounted for about 10 per cent of people who receive a lightning strike without national incident reporting.

In the United States he said detailed lightning storm advice had reduced lightning strike mortality from 300 to 30 people in the last 20 years.

“The death rate from lightning is surprisingly low and a good many people will survive,” he said.

When lightning hits the body, either directly or through a conductor such as a tree, the current is transmitted into the internal body, crosses the heart and stops the heart and lungs, Dr Andrews explained.

He said the heart could restart because of its inbuilt pacemaker to establish blood circulation, but the breath doesn’t have this kind of function.

“We can then be in the position of blood circulation, but no oxygen in the blood and because of that starvation of oxygen, the whole system shuts down a second time,” Dr Andrews said.