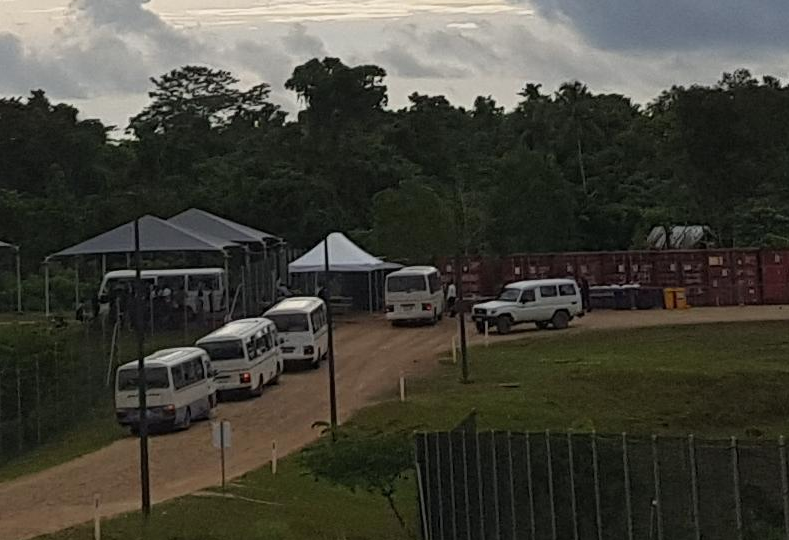 Buses full of refugees are pictured arriving at one of the alternative centres on Manus Island. Photo: Behrouz Boochani

Papua New Guinea police and immigration officers appear to have beaten refugees and asylum seekers with batons as the remaining men were forced out of the decommissioned processing centre on Manus Island.

About 400 men had barricaded themselves in the Lombrum site for three weeks without food, water and electricity before a police intervention began on Thursday.

The standoff ended on Friday after officers entered the site about 7am local time and appeared to beat the men with long batons, video shows.

“They beat lots of people with tools. Everyone got terrified and they are scaring … All of us are now leaving.

“Guys are just afraid, and guys are so, so upset.”

Mr Abdul was initially inside the centre when he spoke with The New Daily, but was on a bus by about 8.30am local time.

“I’m leaving with lots of tears. But I will fight for justice.”

Ron Knight, the former MP for the Manus province, tweeted on Friday that there weren’t enough beds in the new centres for the men.

Immigration Minister Peter Dutton confirmed on Friday afternoon that all of the men had been moved into the alternative sites.

Look Australia , that's what you people doing with us by using PNG hands.
This isn't forcing? @PeterDutton_MP Look it's you who want to make violence, so u can blame us but we are peaceful, and will be peaceful until we get freedom in safe place.#ManusSOS#Saveus pic.twitter.com/yyGOIimjzR

“The Australian government welcomes this development,” he said in a statement.

He claimed reports of violence and injuries were “inaccurate and exaggerated” and called for advocates to put a stop to “false hope” the men could be brought to Australia.

On Thursday, Kurdish refugee and journalist Behrouz Boochani – who acted as an unofficial spokesperson for the detainees at the Lombrum site – was marched away by officers wearing camouflage.

Mr Boochani later said he’d been handcuffed for two hours before being released. Advocates and journalists – including Peter Greste – have slammed his arrest as a targeted attack on press freedom.

With limited reporting coming out of Manus, Mr Boochani has been instrumental in getting refugee news to Australia through social media channels.

About 40 other men were also removed on Thursday, before the remaining 300 others were forced out on Friday.

World Vision Chief Advocate Tim Costello – who is on Manus for the Australian Council for International Development – said the issue was far from solved.

They tucked us in overcrowded buses
Asserting that whoever left behind will last long pic.twitter.com/k8XEJkqbN4

PNG officers had spoiled the men’s drinking water at the Lombrum site in the weeks since its closure.

“It was just a slow tightening of the noose,” Mr Costello said.

But he had the “highest praise” for neighbouring locals, who helped smuggle food and water into the decommissioned site.

The refugees and asylum seekers remained “strong and united” together in their peaceful resistance over three weeks because they “had some agency for the first time in four or five years”, Mr Costello said.

“It was the first time they were making decisions, not someone making them for them.”

He called for a special envoy to be appointed to the crisis, for the New Zealand resettlement deal to be taken up, and for further settlement options to be explored – including in Australia.

The men were being split between alternative centres around Lorengau, the island’s capital, at East Lorengau Transit Centre, Hillside Haus and West Haus.

On my way to the transit centre beaten and kicked thanks to #Aus for your hospitality #Manus #BlackFriday pic.twitter.com/26nL9c15rf

Mr Dutton has argued all three alternative centres had essential services for the men. Witnesses on the island have disputed the claim.

He said it may be fit for use in four or five weeks, adding it was “unbelievable that Australia couldn’t get its act together” in time.

“It just adds to the profound sense of dismay.”

“It’s hard to believe one of the poorest nations in the world has to pick up our responsibility.”

Prime Minister Malcolm Turnbull stood by the policy of offshore processing of refugees on Friday.

The New Daily has approached Mr Dutton and the immigration department for further comment.

Manus Island: Refugees ‘beaten with batons’ and forced onto buses as standoff comes to an end