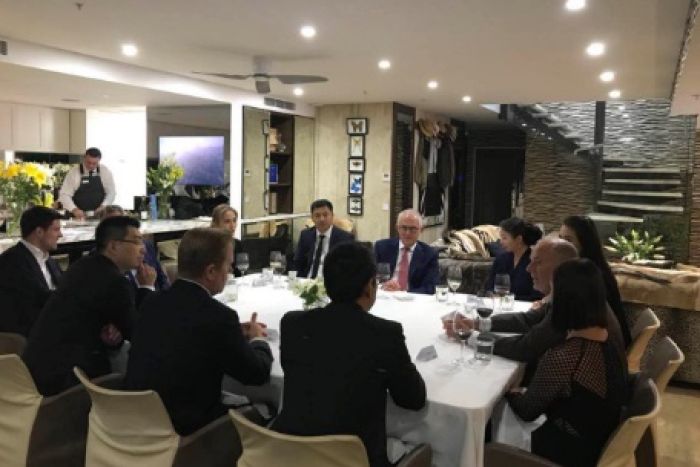 Mr Turnbull was invited to the Sunday night dinner hosted by the LNP in Brisbane. Photo: ABC/Australian Energy Windfarm

Prime Minister Malcolm Turnbull had an exclusive dinner with a wealthy Chinese businessman four days after one of his companies donated $40,000 to the Queensland Liberal National Party.

The revelation comes amid debate about Chinese companies trying to exert influence on the nation’s political class through financial donations and lobbying, and on the eve of the Queensland election.

The businessman, Liu Xiaodong, is one of three directors of Gold Coast-based company Australian Energy Windfarm (AEW), which describes itself as “China’s responsible wind power supplier”.

Mr Liu is also the chairman of China-based renewable energy giant Heilongjiang Ainaju Daianli Co Ltd, which owns 100 per cent of AEW and is pursuing major investment opportunities in Queensland.

The ABC understands Mr Turnbull had not heard of Mr Liu until they met at a dinner on Sunday night in Brisbane, which the company had reported on its Mandarin website but deleted shortly after being contacted by the ABC.

There is no record of AEW having any significant projects in Australia and the business is registered at a suburban house. Its website is incomplete but says it is planning a solar power plant near Kingaroy in Queensland.

“The company in question is a proprietary limited company registered with ASIC and the donation has been disclosed in accordance with the Electoral Commission of Queensland’s guidelines,” he told the ABC.

Mr Liu was seated next to the Prime Minister, on his right, at a 12-person dinner in Brisbane.

The ABC has not yet confirmed the identity of the other guests.

It is not clear who invited Mr Liu or who determined the seating arrangement.

The Chinese parent company says its Australian affiliate was established in line with the Chinese Government’s “One Belt One Road” initiative; a trillion-dollar push to dominate trade that has raised concerns within Australia’s intelligence community.

The ABC has contacted AEW and Heilongjiang asking for the motivation for the political donation, but no response was received before deadline.

The AEW website claims it has “been in this industry for several decades with exceptional practical skills, profession, strong business relationships among suppliers, governments, construction [sic], which are the major foundation for our success”.

But the company was only registered with ASIC in September 2016. That same month, Mr Liu claims to have led a delegation to Australia to explore energy investment opportunities.

When the ABC contacted AEW for comment, the spokesman said he did not speak English.

It is unknown where the dinner was held.