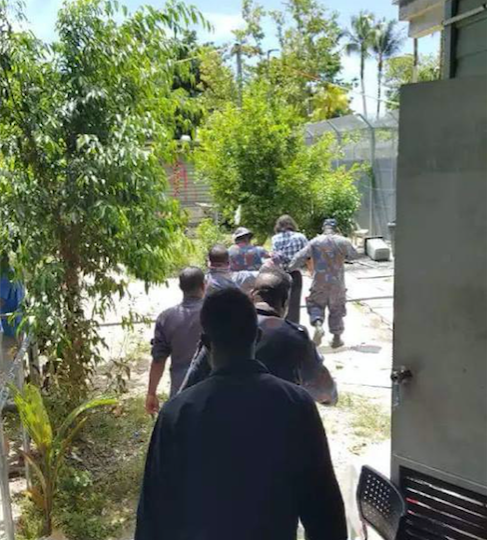 Kurdish refugee Behrouz Boochani was forced out of the Manus Island centre on Thursday, the men say. Photo: Supplied

A refugee who acted as a leader and spokesperson for the men detained on Manus Island has been arrested as Papua New Guinea police descended on the decommissioned processing centre.

Kurdish refugee and journalist Behrouz Boochani was marched away by officers wearing camouflage on Thursday afternoon as tensions escalated.

About 40 other men were also removed by force and taken to new transit centre Hillside Haus, according to refugees.

Immigration Minister Peter Dutton confirmed to Sky News ‘a number’ of detainees had been moved.

“A number of people I’m advised have been moved and we would expect the number which, up until this morning, had been about 370 people in that centre would drop well below that now,” Mr Dutton said.

“Like us, the PNG authorities want people to leave the centre and go to the new $10 million facility and all the services are provided there including medical and food.”

I’ve just been released. They hancuffed me for more than two hours in a place behind the prison camp. The police commander yelled at me ‘you are reporting against us.’ They pushed me several times and broke my belongings. Will write more about it later.

Prime Minister Malcolm Turnbull stressed it was time for the men to relocate.

“The people on Manus should go to the alternative places of safety with all of the facilities they need. They should do so peacefully, and they should do so in accordance with the lawful directions of Papua New Guinea,” Mr Turnbull said on Thursday.

PNG police and immigration officials entered the site shortly before 7am local time (8am AEDT) on Thursday.

There are claims “aggressive” officers threw stones and “beat” the men with long rods.

One man was pictured with light blood splatter on his chest. Two others were said to have fallen unconscious earlier on Thursday. One suffers epilepsy while the others has heart problems, the men said.

The Media Entertainment and Arts Alliance union slammed the “targeted” arrest of Mr Boochani as an “egregious attack on press freedom”.

Meanwhile, Labor’s immigration spokesperson Shayne Neumann agreed with the government, saying the men needed to resign to the alternative centres.

He added that Mr Turnbull had a “moral obligation” to deescalate the crisis, and go ahead with the resettlement offer put forward by New Zealand.

The Greens described the forced removal as a “dark day” in Australia’s history.

“It’s a foul and now-bloodied stain on our national conscience,” Greens Senator Nick McKim said in Hobart on Thursday.

“Dutton tried to starve and dehydrate the men out of his prison, now he’s using violence to try to force them out.”

The nearly 400 men remaining at the Lombrum centre had peacefully resisted the move for three weeks since water, food and electricity was withdrawn.

Witnesses on Manus have disputed that the alternative sites on Lorengau have essential services. The men say they do not want to move to yet another detention, and fear violence from locals in the area.

In Melbourne, about 20 protestors barricaded themselves at the entrance of the Victorian Liberal Party’s headquarters in the CBD as the crisis unfolded.

Furniture and wooden pallets were used to obstruct the doorway. At least 30 police officers lined the outskirts of the demonstration and caged in the protestors.

Another demonstrator, Kat Moore, said the police operation on Thursday was increasing “the risk of men being seriously harmed”.

Asked what the action was calling for, Ms Moore said Australia needed to “facilitate the safe passage of the men to a safe country”.