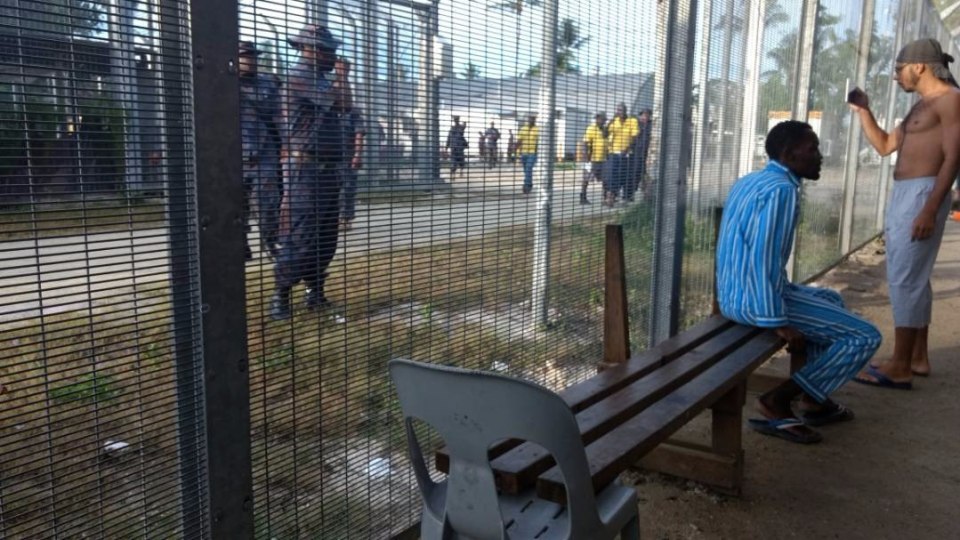 Detainees said they were given an hour to leave after police and immigration personnel entered the Lombrum site shortly before 8am on Thursday morning.

“Lots of PNG police and immigration are inside the camp and using unacceptable words and trying to make a pressure on us to leave, if not then anything could happen,” Pakistani refugee Samad Abdul told The New Daily.

Mr Abdul said he would not leave, no-matter how the situation unfolds.

“Today’s pain is nothing if I compared with 4.5 years,” he said.

“We want people to move on,” he said.

The Department of Immigration and Border Protection declined to add further comment when approached by The New Daily.

Iranian journalist and refugee Behrouz Boochani said police and immigration officers were “shouting us to leave the prison camp”.

“There are about 50 mobile squad police that are threatening people to leave,” Mr Behrouz wrote on Twitter.

About 9am he said the police were “now in their hundreds”.

“We are on high alert right now. We are under attack.”

Several videos have been released by those on the island. One video shows some of the residents climbing onto a roof while officials ordered them down via a megaphone.

“Immigration is threatening the refugees who are on the roof to come down and hand over their phones. They are very angry and are shouting at the scared refugees to deliver the phones,” Mr Boochani said.

Police were damaging the men’s property, it was claimed.

There were also reports of men being arrested. The New Daily has not been able to confirm the reports.

“Someone is saying they arrested someone but I cannot confirm, it’s too much tension and the refugees are extremely scared and gathering in a corner. They are threatening people over the microphone,” Mr Boochani said.

They fear a repeat of the 2014 riots, in which 23-year-old Iranian detainee Reza Berati was murdered.

About 400 men remain at the Lombrum centre without water, food and electricity to peacefully resist being moved to three sites at Lorengau, the island’s capital.

The news comes after former Australians of the year penned an open letter to Malcolm Turnbull and Bill Shorten urging them to address the “human disaster” unfolding on Manus Island’s decommissioned detention centre.

In the letter, the celebrated group calls for the government to send aid to the detention centre which has been without running water and electricity for about three weeks.