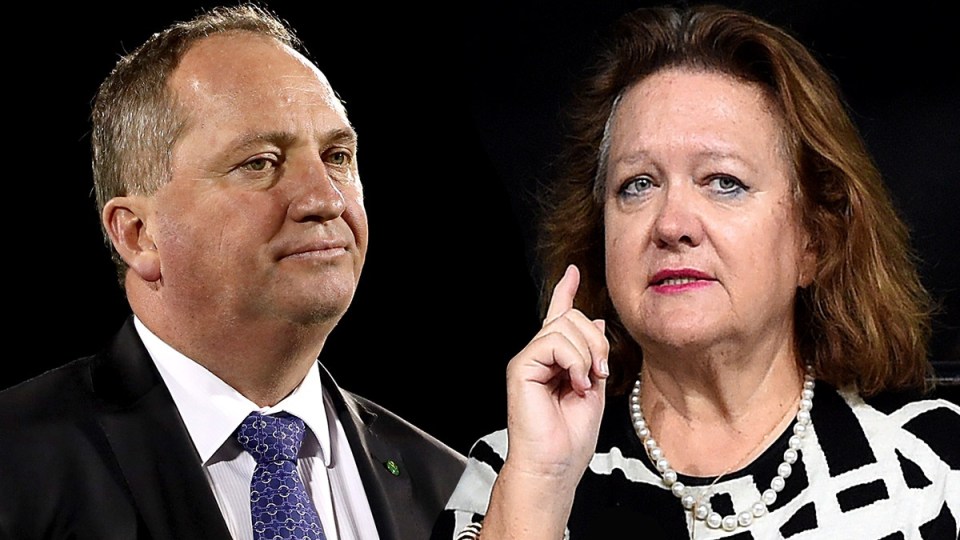 Ms Rinehart gave Mr Joyce the cheque for being a 'champion of farming'.

Barnaby Joyce has declined a $40,000 prize that mining magnate Gina Rinehart sought to give him for his agricultural achievements.

Ms Rinehart presented the award and the cheque at an event put on by her resources company Hancock Prospecting, held at the Australian War Memorial on Tuesday.

She announced Mr Joyce was the winner of the National Agricultural and Related Industries prize, branding the former deputy PM a “champion of farming”.

However, Mr Joyce was quick to decline the money.

Mr Joyce initially said he would donate the money to charity but later confirmed he would return the cheque to Ms Rinehart.

“I was very humbled to receive the award but very surprised to receive the novelty-sized cheque. I did not take any cheque from the event and as soon as office hours resumed today, I took immediate action to politely decline any acceptance,” he tweeted on Tuesday.

I was very humbled to receive the National Agriculture Day award but very surprised to receive the novelty-sized cheque. I did not take any cheque from the event and as soon as office hours resumed today, I took immediate action to politely decline any acceptance.

“Barnaby Joyce, what on earth are you doing accepting $40,000? And I have to say, why is a mining millionaire giving a Turnbull government minister a $40,000 cash present?” Mr Shorten told reporters in Brisbane on Wednesday.

“This is very unhealthy for our democracy. It’s not right. It doesn’t look right, it doesn’t smell right.”

Opposition agriculture spokesman Joel Fitzgibbon described the event as “the festival of Barnaby” and the award as “very, very smelly”, as he put the pressure back on Prime Minister Malcolm Turnbull.

“Many questions need to be answered, and the Prime Minister — who is the acting Agriculture Minister — should be answering them today,” he said.

The gift came as Mr Joyce tries to regain his seat of New England, which he lost after being confirmed by the High Court as being a dual New Zealand-Australian citizen.

The former deputy prime minister and agriculture minister will go back to the polls on New England in less than two weeks, with 17 candidates contesting the seat.

The ABC reported that Mr Joyce flew to Canberra for Tuesday’s event, as other New England candidates criticised him for being a no-show at some local debates over the past week.

The National Farmers Federation also distanced itself from the award.