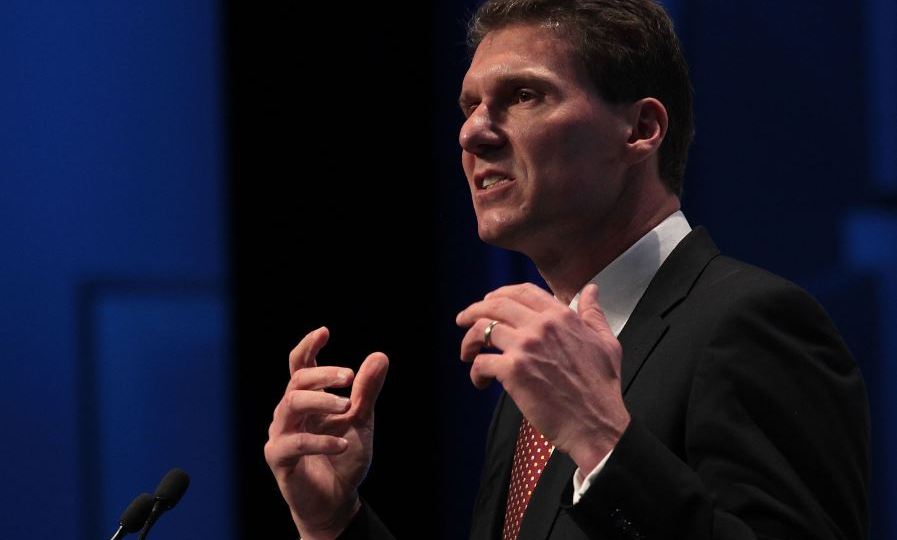 Cory Bernardi rallies the faithful at the ACL conference, urging Christian activists to build on the networks established during the postal survey. AAP/Ben Rushton

Conservative senator Cory Bernardi has hailed the failed No campaign as an “extraordinary success”, urging opponents to stay mobilised in support of candidates who “know whether they’re Arthur or Martha”.

Speaking to an audience of 700 delegates at an Australian Christian Lobby conference in Sydney, Senator Bernardi’s call to arms was echoed by fellow conservative and Nationals senator Matt Canavan.

“There is no other country to flee to in the world if we lose,” Senator Canavan told the cheering crowd.

“There’s no other planet we can take ourselves to.”

Senator Canavan promised he would be attempting to move unspecified amendments to the bill legalising gay marriage.

“I’m trying to fight to ensure that we’re not a persecuted minority,” he told the crowd.

But it was Senator Bernardi who commanded the ACL supporters’ hearts, minds and political ambitions, as he urged them to build on the momentum of the No crusade.

The Australian Conservatives leader lauded the efforts that saw 40 per cent of  participants vote ‘no’, despite competing with what he described as a “ten-year campaign” by marriage-equality supporters who enjoyed “tens of millions of dollars” in funding.

“That is a fantastic start,” Senator Bernardi said.

If only half the ‘no’ voters elected “decent Senate candidates”, he continued, at the next election there would be up to a dozen politicians in the upper house to drive change and foil progressive initiatives.

“Prayer is important – never underestimate that. If you want to pray for things, pray for strength for those who are leading in this battle.”

Senator Canavan urged the ACL and allied groups to draw strength and comfort from the knowledge that they have observed what he called the Christian obligation to speak the truth.

Now that “standing army” was obliged to prepare for bigger battles ahead, he said to cheers and applause.

Those comments came amid reports federal Attorney-General George Brandis is considering incorporating Article 18 of the International Covenant on Civil and Political Rights (ICCPR) into the same-sex marriage legislation.

The move, intended to appease conservatives demanding better protections for freedom of religion, speech and parental rights, was supported at the conference by ACL managing director Lyle Shelton.

“I welcome that because that’s essentially what the [alternative] James Paterson bill was doing, and yet he’s been demonised all week,” Mr Shelton told the 700 delegates.

“The ICCPR is actually quite a good document. It’s one that we at ACL … have quoted in our government submissions for years.”

Article 18 of the covenant – which Australia agreed to in 1980 – states: “Everyone shall have the right to freedom of thought, conscience and religion.”

Senator Bernardi said he went into the process of changing the Marriage Act with “a degree of optimism”.

But he was less upbeat about the current Parliament, which he described as “tortured”, citing fellow senators’ reactions to a series of provocative motions he moved – most notably a failed attempt to oppose Medicare funding for gender-selective abortions.

That motion, Senator Bernardi explained, caused confusion, with some senators leaving the room and others merely sitting on the observers benches.

“You’ve got a party of government effectively not knowing whether they’re Arthur or Martha on gender-selective abortions,” he joked, drawing laughter and applause.

“We need people in Parliament who know whether they’re Arthur or Martha.”