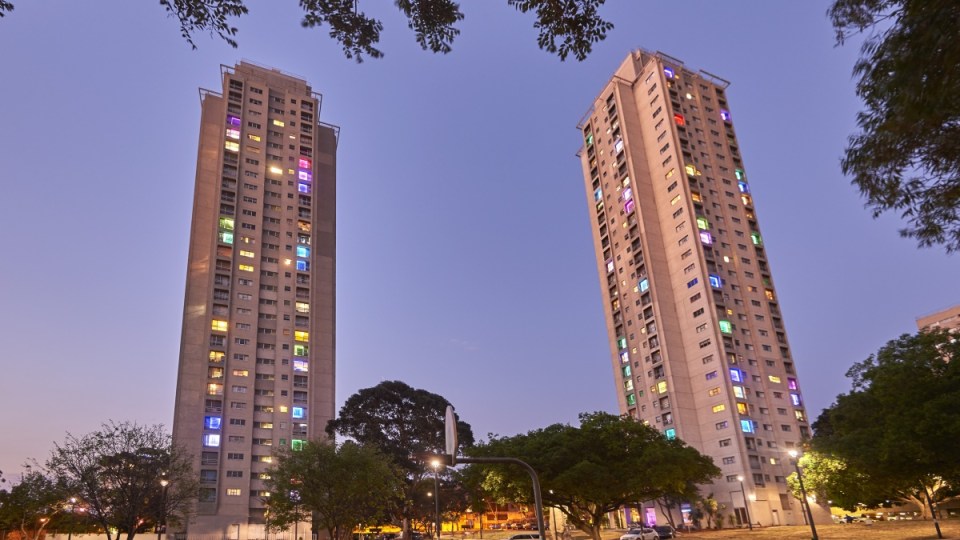 The Waterloo public housing blocks in inner-Sydney, where residents are facing eviction, is pictured. Photo: AAP

The Turnbull government’s plan to tackle homelessness would gouge social housing tenants and make them even poorer, welfare groups say.

“It’s really disempowering. It again targets social security recipients in a way that we think is discriminatory, and it’s also quite punitive,” she said.

Social Services Minister Christian Porter said the scheme had the support of all states and territories – which are responsible for social housing – except Victoria, Tasmania and the ACT.

But The New Daily can reveal Queensland is also not on board, with Housing Minister Mick de Brenni describing the proposal as “counter-productive”.

Victoria confirmed it would reject the scheme, while NSW and South Australia both confirmed the state governments would support the measure.

Once a state or territory adopts the ARDS – if the legislation is passed – social housing providers within each jurisdiction could then opt into the scheme. The providers would then decide which tenants have automatic deductions.

Ms Gear said tenants would likely end up being forced onto the scheme, which would be “part and parcel of every social housing tenancy agreement”.

There is no cap on how much could be deducted from a person’s Centrelink payment and, theoretically, someone’s entire payment could be wiped.

Adrian Pisarki, executive officer at National Shelter, said reducing a tenant’s ability to delay paying rent or bills in the event of an emergency “had the potential to completely derail their ability to put food on the table, to cover medical expenses, or cover any number of other small repairs they may need”.

“It could have the unintended consequence of making them more poor, putting them deeper into poverty,” he told a Senate inquiry this week.

Welfare groups warned that tenants could end up paying damage bills they aren’t liable for after Victorian Ombudsman Deborah Glass found the state’s Department of Health and Human Services was unfairly billing tenants.

The findings, handed down last month, also found the department was escalating claims to the Victorian Civil and Administrative Tribunal (VCAT) before giving the tenant the right to be heard.

“Often, especially after tenants vacate properties, there’s been instances where notices to appear at tribunal hearings have been sent to the address of the vacated property, so the tenant doesn’t even get that,” Ms Gear told The New Daily.

In 2013-14, the department claimed 100 per cent of repair costs from vacating tenants. That figure has since dropped, and the department has accepted all of the Ombudsman’s recommendations.

The investigation was sparked over complaints the department pursued a maintenance debt of more than $20,000 against a victim of domestic violence. After failed negotiations, VCAT found the former tenant was liable for just over $1000 – about 5 per cent of the original debt.

Ned Cutcher, the senior policy officer at the NSW Tenants’ Union, told the Senate inquiry that was also a common experience in NSW.

What’s behind the plan?

Mr Porter argued the scheme would reduce homelessness by ensuring social housing tenants were not evicted because of rental arrears, and rejected it would put vulnerable people in even worse positions.

He said the states and territories claimed they were each losing about $30 million in unpaid rent annually, and could invest more in public housing through the scheme.

The states have not made a commitment to providing more housing with the recouped money, the inquiry heard.

NSW and Queensland housing ministers both told The New Daily the vast majority of public housing tenants in their states paid rent on time.

Mr Porter said 8900 tenants were in serious rental arrears in 2013-14. That represents about 1 per cent of the entire social housing cohort, which welfare groups have argued represents a non-issue.

In submissions to the Senate inquiry, Mr Pisarki argued the problem was in fact a chronic shortage of social housing.

“[The scheme is] coming at a problem around income management and managing people’s very meagre incomes when really the problem is that there isn’t sufficient social housing to go around and we’re really trying to micromanage a declining remnant of a once-proud social housing system,” Mr Pisarki said.

Jenny Macklin, Shadow Minister for Social Services, told The New Daily Labor was reserving its position until the conclusion of the Senate inquiry this month and had concerns over the proposal.