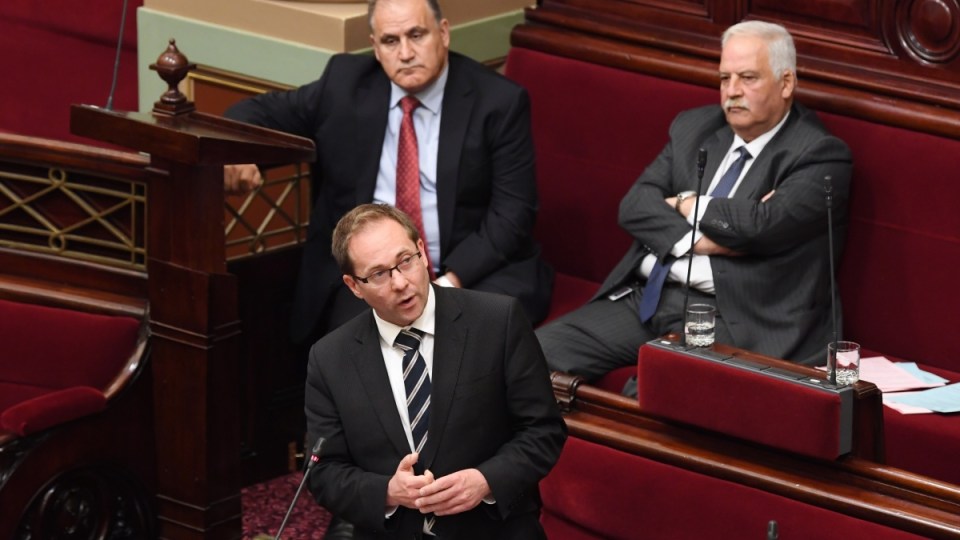 Parliamentary debate over Victoria’s historic assisted dying laws, that lasted more than 24 hours, has been suspended after a Labor MP had a medical emergency and was taken away in an ambulance.

The upper house began debating the 141 clauses that make up the legislation at 9:30am on Thursday and continued overnight and into Friday.

But it was suspended just before 10:30am after Daniel Mulino, who was not in the chamber at the time, became unwell.

He fell ill just moments after the Coalition’s David Davis unsuccessfully asked for the sitting to be reviewed.

Mr Davis had expressed concern for the welfare of MPs, who had been up all night.

Mr Mulino represents the Eastern Victoria Region, with his office based in Pakenham.

The upper house was due to debate the bill all day and potentially into the weekend, but it has been suspended until next Tuesday.

“The reason we’re adjourning today is because of the health and wellbeing of one of the members of the chamber,” Special Minister of State Gavin Jennings told parliament on Friday.

“We don’t want to cause him or anyone else any stress in relation to this matter.”

Meanwhile, advocates in NSW are ‘devastated’ proposed assisted dying laws have been defeated in state parliament.

After a day of emotional debate in the NSW upper house on Thursday, with many MPs tearing up as they made their pleas for and against, the controversial Draft Voluntary Assisted Dying Bill was defeated by 19 votes to 20.

If the proposed legislation passed the upper house, it would have likely fallen through in the Legislative Assembly with both Premier Gladys Berejiklian and Opposition Leader Luke Foley opposing it.

“l worry about the message it sends to a society where some old and frail people feel that they are too much of a burden on their loved ones that they have to end it all,” Mr Foley told AAP.

A bill to allow patients 25 years or older, whose deaths are imminent and are in excruciating pain, the option to choose how they die was voted down by one vote.

Dying with Dignity advocate Shayne Higson was overwhelmed after the result.

“We knew the numbers would be tight but we were led to believe we just had the numbers,” Ms Higson told AAP on Friday.

“But 24 hours before the debate two members of the upper house changed their position.

“It was challenging emotionally to sit through this debate. It really felt like politicians were unwilling to listen to the vast majority and were turning their back on terminally ill people and their families.”

‘Not an easy process to go through’

Victorian Premier Daniel Andrews said their lengthy sitting was “not an easy process to go through but we need to get this done”.

It was suggested to the premier it was “ridiculous” to expect politicians to work for more than 24 hours straight.

“Most people think politicians could probably work a bit harder, that would be my sense of it,” Mr Andrews replied.

Health Minister Jill Hennessy said the debate was mired as opponents dragged it out as long as possible to prevent a vote being called.

“Over the past 24 hours, there’s been a degree of frustration more than emotion as we’ve been going through each clause,” she told ABC Radio.

The Labor government has agreed to a series of amendments to the bill in a bid to get the 21 votes it needs in the 40-member upper house.

So far 20 MPs have said they will vote yes.

Under the first set of amendments to be considered, patients must be a Victorian resident for at least a year, the coroner will be notified and assisted dying will be mentioned on the death certificate.