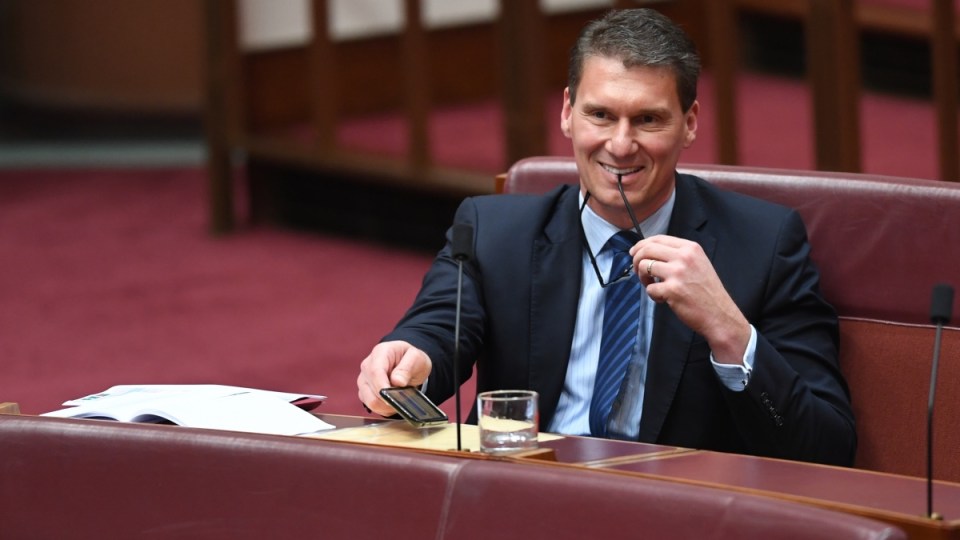 Cory Bernardi put forth a slew of divisive motions on Thursday. Photo: AAP

With debate beginning on a bill to legalise same-sex marriage, Senator Bernardi set the cat among the pigeons with a slew of divisive motions on issues such as Medicare funding for abortion, communism, progressive lobby group GetUp!, sex education in schools and the anti-domestic violence group White Ribbon.

In a messy split, six Coalition senators, including frontbenchers Matt Canavan, Anne Ruston and Zed Seselja, crossed the floor to back a Bernardi motion over Medicare funding for pregnancy terminations “where it occurs on gender grounds”.

Abortion law is a state or territory issue in Australia and Medicare does not fund sex-selection abortions.

Greens Senator Sarah Hanson-Young accused those backing the motion of misogyny, adding: “This is about rape victims having access to safe and legal abortion.”

“That’s what you just voted against.”

Government ministers Mathias Cormann and Michaelia Cash, who is the Minister for Women, backed the motion.

The moment was a flashpoint in a day when the Senate was expected to focus on how to legislate same-sex marriage following Wednesday’s emphatic ‘Yes’ result.

The government also backed another Bernardi motion, which noted that GetUp! was “seed-funded by organisations closely connected with Mr George Soros, a renowned globalist and funder of socialist politicians and causes”.

The provocative motions caused chaos and confusion on government benches with Coalition senators initially unsure how to vote.

Later, Defence Industry Minister Christopher Pyne played down the need for an investigation into a hacking of his Twitter account that led to his profile ‘liking’ a hardcore pornography post.

Senator Bernardi called for a full investigation, arguing Mr Pyne’s portfolio meant “Australia’s national security may have been placed in a compromising position”.

Mr Shorten appeared to back Senator Bernardi’s call, saying there should be “some investigation and explanation”.

“I feel for Christopher Pyne,” he said.

“But I actually think when any minister has their account hacked, but in particular any minister when they are the Defence Minister, this is serious.”

I was hacked overnight! I was 😴 at 2am. Someone tried to hack my social media yesterday. Maybe they are making mischief over the plebiscite?

A spokesman for Mr Pyne said the account was not a Defence, government or parliamentary social media account, meaning there “are no defence or national security implications”.

“These things are not uncommon. For example the Treasurer suffered a similar incident last year, as did the Foreign Minister in 2014,” the spokesman said.

“All appropriate action has been taken.

Foreign Minister Julie Bishop blamed a hack in 2014 when her account began tweeting posts such as “LOL u gotta read this, its crazy”, while Treasurer Scott Morrison said his account was compromised when it ‘liked’ a post criticising China’s human rights record.

A spokesman for Greens leader Richard Di Natale told The New Daily the party was still considering the call for an investigation.

Immigration Minister Peter Dutton, a senior conservative within the government, told Sky News he would not support rolling back anti-discrimination laws to allow businesses to turn away people seeking goods and services for a gay wedding.

He did, however, express support for protections to allow parents to choose whether their children were involved in programs such as Safe Schools.

The debate will begin again on Friday morning.