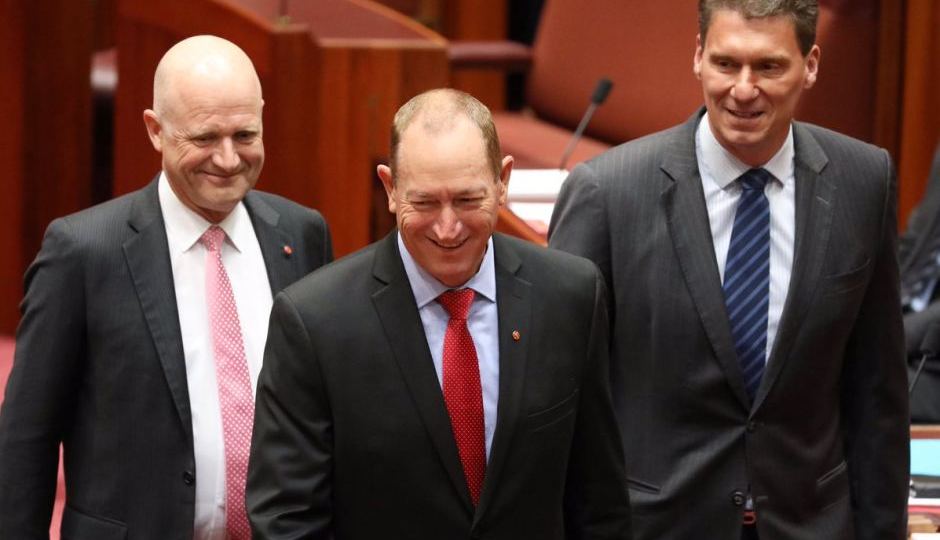 One Nation has been rocked by the shock resignation of Fraser Anning, who quit the party on the same day he was sworn into the Senate to replace Malcolm Roberts.

Senator Anning raised eyebrows on Monday morning when he was ushered into the Senate by crossbenchers David Leyonhjelm and Cory Bernardi, rather than his One Nation colleagues.

The party claimed in a statement that Senator Anning had refused to take Senator Pauline Hanson’s calls for some time and when the two finally spoke on Monday morning they quickly fell out.

“Mr Anning only spoke with Senator Hanson this morning on the return of Parliament, but those talks quickly failed when Senator Hanson refused a number of Mr Anning’s staff into a Party room meeting,” the statement said.

According to the statement, Senator Anning said “I know where this is going” before standing up and walking out of the room.

Senator Anning told The Australian he had not intended to quit the party, but his two-decade friendship with Pauline Hanson “went to hell in a handbasket” on Monday morning.

On the question of joining another party, he said he was keeping his options open.

“I would always consider other options but initially this was not my intention when I first walked into this building this morning,” Senator Anning said.

“That was the furthest thing from my mind.

“I’ve talked to everyone, politely, about my options. I’m not sure. I didn’t have any plan because I didn’t know this was going to happen, but (Senator Hanson’s) conditions were totally unacceptable.”

He added: “I ran for One Nation in ’98 and my wife and I considered Pauline a close friend, but that all went to hell in a handbasket this morning.”

The New Daily has contacted Senator Anning for comment.

Senator Anning was sworn in on Monday morning alongside Jordan Steele-John and Andrew Bartlett, who have replaced Greens former senators Scott Ludlam and Larissa Waters.

Deal on citizenship but war continues

The Queenslander’s shock resignation came as the government and Labor finally came to an agreement for a universal citizenship disclosure regime aimed at ending the crisis.

Labor’s leader in the senate Penny Wong claimed victory on Monday, saying the government had acquiesced to the Opposition’s demands.

“The prime minister was dragged kicking and screaming to this,” she said.

Under the motion, politicians will have until December 1 – five days after Parliament returns – to disclose their citizenship status, as Mr Shorten had demanded last week.

The Prime Minister had originally proposed a 21-day period, rather than five days.

The regime also includes a more onerous standard for politicians to prove their eligibility, such as proving what steps they have taken to assure they have not inherited citizenship of another country from a parent or grandparent.

Government senate leader George Brandis confirmed the government would move a similar motion in the House of Representatives, meaning all 226 parliamentarians would be subject to the new rules.

“It is, as the High Court has said, a matter for this Parliament to sort this issue out. And we are doing so,” Senator Brandis said.

He also demanded Labor refer its MPs Justine Keay and Susan Lamb to the High Court.

Both MPs did not receive confirmation their citizenship renunciations had been accepted by the UK Home Office until after nominating for Parliament, but Labor says they took “all reasonable steps” and are in the clear.

The major parties have engaged in an escalating war of words over citizenship, with the Opposition threatening to “go nuclear” and refer another five Liberals to the High Court if the government strikes first.

Fraser Anning quits One Nation on first day in the Senate