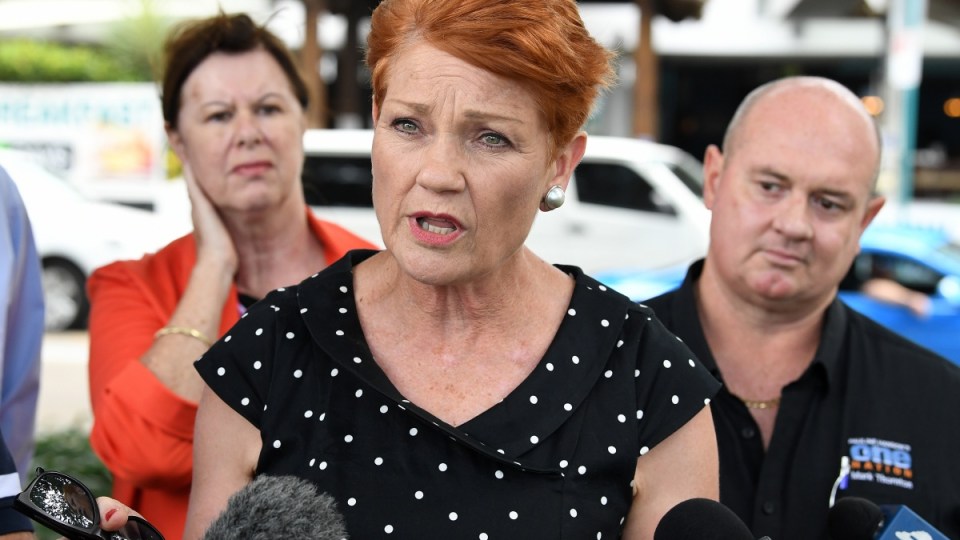 A One Nation candidate in Queensland’s upcoming election will remain on the ticket despite revelations that he owns a sex shop whose Facebook page has made light of domestic violence.

Candidate for the Townsville seat of Thuringowa, Mark Thornton, confirmed he was the owner of Townsville adult store, Cupids Cabin, in a press conference on Friday afternoon.

But Mr Thornton said he was unaware of inflammatory content on the business’s social media page.

In January 2016, the adult business, which Mr Thornton said is managed by his wife, wrote: “Good sex should be in the gray (sic) area between ‘tickle fight’ and domestic violence.”

When questioned at a press conference about his business and the post, Mr Thornton said he was not aware of the specific message.

As more sexually explicit posts were read out at the One Nation media conference, party leader Senator Pauline Hanson intervened and stepped to the microphone.

“It’s the first time I’ve been made aware of it,” Senator Hanson told the group of reporters, seemingly blindsided by the news.

Senator Hanson would not confirm at the time if she was comfortable having a candidate connected to the sex industry.

“You are not going to pressure me to make a decision here of what I’m doing about the candidate. It’s not going to happen,” the One Nation leader said when the questions were asked.

“I need to actually have a look at this and I will actually be talking to Mark [Thornton] about it and to [deputy state leader] Sam Cox and [state leader] Steve Dickson.”

The New Daily contacted a One Nation media representative who said he couldn’t provide assistance or comment on the matter.

But Senator Hanson later told media the party would not be dumping Mr Thornton.

“I am not backing down from this, and I’m not disendorsing Mark,” she said, while The Courier Mail reported Senator Hanson branding the criticism as “political correctness gone mad”.

“I had a talk with him, he runs a legitimate, registered business,” the paper reported her as saying.

“If I think something is wrong, I will do something about it, but in this case it’s not wrong,” she said.

The Facebook page was taken down soon after the press conference.

Mr Thornton said he was also unaware of a post from September 6 this year stating: “I’m selling bra’s (sic) inbox a pic of your ti-ties so I could see if I got your size.”

“That could (have) been from a staff member, I haven’t actually seen the site for quite a while,” he said.

“It’s my business but I don’t manage it. It’s a retail shop.”