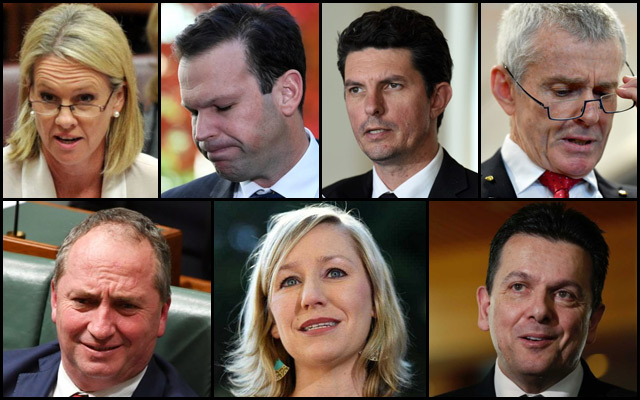 The High Court ruled on the cases of seven parliamentarians on Friday. Photo: TND

Barnaby Joyce’s chances of keeping his place in Parliament have been immediately boosted, with his fierce rival Tony Windsor revealing he will not contest a byelection for the seat of New England.

At a press conference at Parliament House, Prime Minister Malcolm Turnbull conceded it was “clearly not the outcome we were hoping for”, but said he was confident Mr Joyce would win the byelection.

He confirmed that a byelection would be held on December 2, saying Barnaby Joyce was “the best person to continue to deliver for New England and four Australians living in regional and rural areas”.

Having controversially declared the court would “so hold” that Mr Joyce was eligible to be elected, the PM ducked reporters’ inquiries after only one question.

Former New England independent Mr Windsor said on Friday afternoon he would stay out of the race because his wife had urged him against fighting another campaign.

“I actually love elections, I’ve enjoyed the eight that I have contested, but my wife doesn’t and she had a pretty rough time last time with the tactics and strategies that were used, not only against me … but also against the families,” he said.

“We’ve always been a team. I had a good yarn to her again this morning – I think it’s time she prevailed.”

Joyce knew in his ‘gut’

Earlier, speaking from Tamworth in his electorate of New England, Mr Joyce said he respected the verdict of the court.

Mr Joyce apologised to voters for the “inconvenience” that would arise during the byelection.

He said the government planned to have the writs issued on Friday, meaning the election would be held on December 2.

“It’s a pretty simple story, we’re off to a byelection,” he said.

“I put myself forward to the people of New England as their candidate. I think I have worked pretty hard.”

“In my gut I thought this is the way it was going to go,” he added.

The ruling leaves the government one seat shy of a majority, potentially exposing the Prime Minister to a parliamentary assault from Labor and members of the crossbench during the byelection period.

Independent MP Cathy McGowan confirmed on Friday she would “continue to supply confidence and support to the government”.

Labor immediately went on the attack, with Deputy Labor leader Tanya Plibersek questioning the legal legitimacy of decisions made by Mr Joyce and Ms Nash, who is also in Cabinet.

“Every decision made by Barnaby Joyce and Fiona Nash since October last year is under a legal cloud,” she said.

Roberts to run in Qld election

Standing next to One Nation leader Pauline Hanson, Mr Roberts said he accepted the “decision entirely”.

“The High Court has said I was wrong, do you want any more,” Mr Roberts told reporters.

The court was unanimous in its decisions on all seven cases.

The decision comes a day after the embattled Employment Minister Michaelia Cash fended off calls for her resignation.

The seats left vacant as a result of senators being disqualified are likely to be decided by a recount.

With Mr Joyce fighting a byelection and Ms Nash to be replaced, the NT Nationals senator Nigel Scullion will serve as acting Nationals parliamentary leader.

Ms Nash would be likely to be replaced by NSW Liberal candidate Hollie Hughes in a recount.

Sky News reported that Mr Turnbull was considering delaying a scheduled trip to Israel amid the fallout.

He said he would take on Mr Joyce’s portfolios of Agriculture and Water Resources.