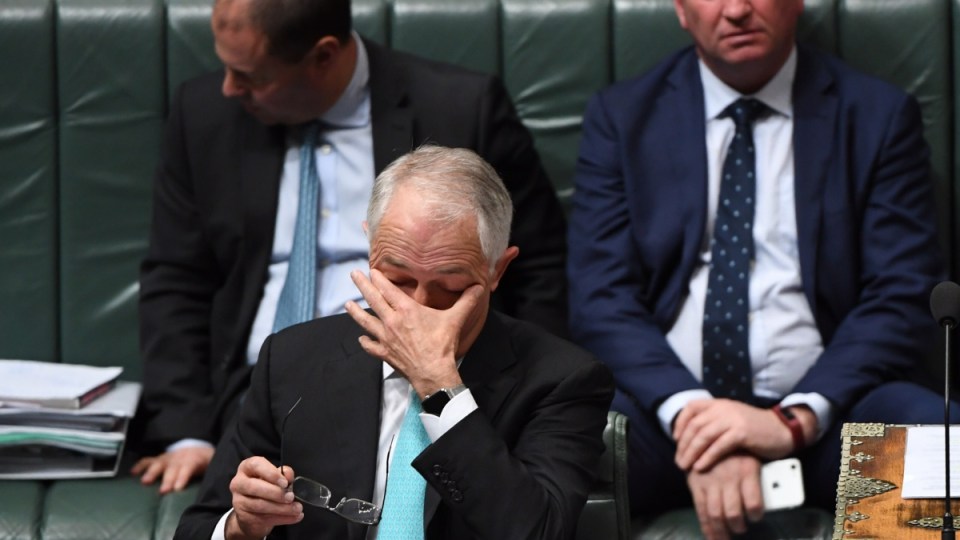 It's been a rough week for Malcolm Turnbull, from NBN investigations to the disqualification of his deputy PM. Photo: AAP
analysis

We used to hear Malcolm Turnbull spruik the benefits of living in exciting times. But you would have to think that after the past week in federal politics, the PM would prefer a touch less excitement in his life.

Friday’s decision by the High Court on the Citizenship 7 topped what could only be called a challenging week for Mr Turnbull.

The court nullified the election of Deputy Prime Minister Barnaby Joyce, along with four senators, thereby removing the Coalition’s one-seat majority in the lower house and effectively creating a hung parliament.

The Turnbull government still has an “absolute” majority because the Speaker Tony Smith can use his vote to break a tied ballot. However, Mr Smith has already said he will not use his vote to “manufacture a majority” when there isn’t one when it comes to votes of confidence and passing legislation.

This leaves the government exposed to a no confidence motion when the House of Representatives returns in four weeks’ time.

It would not necessarily lose that motion given that independent MP Cathy McGowan has said she would side with the government if Labor tried to pull on such a motion.

However, a greater risk for Mr Turnbull during the four days in late November when the lower house sits will be the potential to lose other votes in Parliament – such as a vote to establish a commission of inquiry into banking, which is the parliamentary equivalent of a royal commission.

That risk will dissipate if Mr Joyce is re-elected in the by-election for his “old” seat of New England on December 2. This outcome is more likely now that high-profile independent Tony Windsor has declared he will not contest the by-election.

If the PM really is the optimist he claims to be, he might be grateful that each of the successive dramas that befell him this week managed to push the previous one off our news screens.

Before the High Court decision, the media and Labor Opposition were salivating over the potential scalping of the accident-prone Workplace Relations Minister, Senator Michaelia Cash.

Before that, the bandwagon was poring over Four Corners’ brutal expose of the government’s NBN failure, after having obsessed at the beginning of the week over details of Mr Joyce’s alleged behaviour.

Unfortunately for Labor, which was hoping to create enough momentum to topple Ms Cash over leak-gate, these dramas have been superseded by the fallout from the High Court’s removal of Mr Joyce and the Deputy Leader of the Nationals, Fiona Nash.

While the process to replace Mr Joyce is relatively straightforward, matters are a lot murkier when it comes to Ms Nash.

It’s likely that once the Australian Electoral Commission conducts a special count of the Coalition’s NSW Senate vote to determine who should have been elected in 2016, the successful candidate will not be another National, but Liberal Hollie Hughes.

This will throw out the delicate balance between Nationals and Liberals in the Turnbull cabinet and ministry, which is based on the proportion of MPs that each party has in the Parliament.

Mutterings have already appeared in the media suggesting that Ms Hughes should maintain this agreement by resigning from her new Senate position so that Ms Nash can then replace her.

However, Ms Hughes is apparently not inclined to do so, which will precipitate a showdown between the Nationals and Liberal parties in NSW. The ensuing political imbroglio will further raise the excitement factor for our embattled PM.

Mr Turnbull will be counting the sleeps until his annus horribilis, his “horrible year”, is finally over.