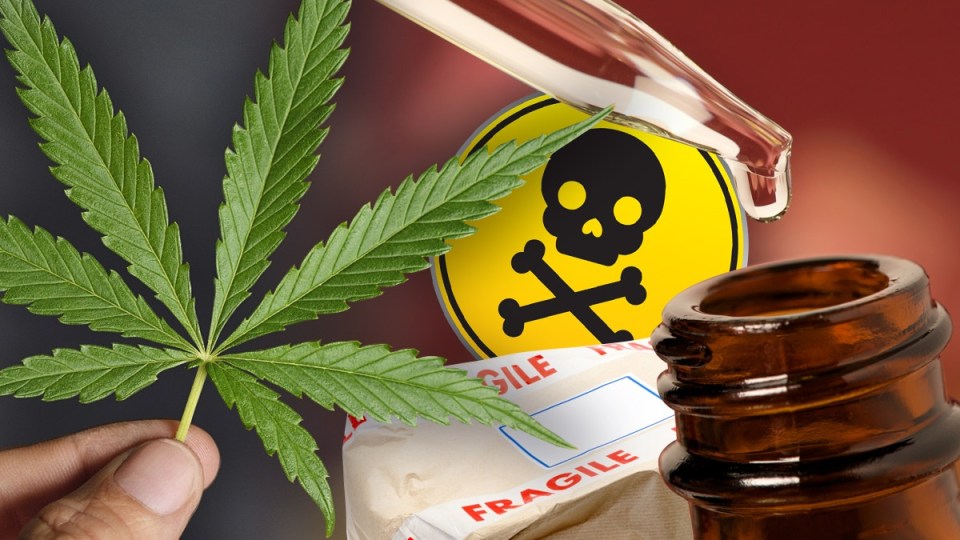 Some of the samples contained a petroleum derivative and household disinfectant. Graphic: Simon Rankin
exclusive

Seriously ill patients who are turning to medical cannabis for life-saving treatment are being sold fake, poisonous and intoxicating products manufactured in backyard laboratories across Australia.

The unlicensed suppliers are sending cannabis oil that contains dangerous chemicals, and then charging people $6000 for up to three months’ supply.

The unregulated products have put patients’ lives in serious danger with several reports of abuse and the leak of private patients’ details. During a six-month investigation, The New Daily was sent 14 different samples of cannabis extract from concerned customers of three different illegal suppliers.

A top Australian research facility, which did not want to be named, independently tested these products for the amount of cannabidiol (CBD) and tetrahydrocannabinol (THC), the two most active ingredients in the cannabis plant.

When that data was analysed by Safe Work Laboratories, 13 products were found to have no medicinal value, contained hazardous chemicals or were heavily intoxicating.

Among the tens of thousands of vulnerable patients online, many so-called ‘healers’ trawl cannabis Facebook forums for potential customers.

Almost 20 months after the federal government legalised medicinal cannabis in Australia, many sick Australians are struggling for legal access, resulting in demand for products from unregulated sites online.

Medical practitioners in Australia can choose to personally import cannabis for a terminally ill patient who falls under Category A of the Special Access Scheme.

Director of Cannabis Consulting Australia, Rhys Cohen, says doctors are reluctant to prescribe cannabis because they fear legal liability and are not educated on the approval process and on the medical science.

“It can also take five to 10 years to get a new product registered on the Australian Register of Therapeutic Goods, and only products that are registered are eligible to be put on the PBS,” Mr Cohen said.

“Tasmania has agreed to directly subsidise cannabis medicine which could be replicated in other states.”

Everyone else falls under Category B. For each individual case, GPs must receive approval from the Therapeutic Goods Administration (TGA) and their state/territory health department. But most will only consider applications supported or completed by a specialist.

Medical practitioners are not allowed to advertise to the public if they are able to prescribe cannabis, nor does the TGA publish a list of authorised prescribers.

Antony Condina, chief executive of GD Pharma, a licensed manufacturer of medicines including cannabis, says the black market products are “dangerous”, and the suppliers must halt production because the oils they are dispensing pose a major “public health concern”.

“There are products on the Australian market that can be used instead so these companies must be stopped,” Mr Condina said.

Seven of the 14 products contained no CBD, and one sample, prescribed to a cancer patient, recorded as much as 47 per cent THC, which is enough to “get you stoned”, Safe Work Laboratories forensic toxicologist Andrew Leibie told The New Daily.

Kazra Stephenson, who suffers from chronic obstructive pulmonary disease, osteoporosis, osteopenia and basal-cell carcinoma, invested roughly $200 a fortnight for medical cannabis but over four months the “bottles started getting worse” and one product “burnt my mouth so much, I had to tip it out”.

“I was crying because I felt like it was my last hope gone out the window. Now I really don’t care if I die,” Ms Stephenson said. “I went broke and sold everything I had. The only thing I own now is my bed.”

NAA is an active chemical in agricultural products such as thinning sprays and rooting hormones.

Safe Work Laboratories forensic toxicologist Mr Leibie said they would “certainly not recommend” anyone to consume this “poison”.

“If you ingest higher and higher doses, you’re taking more and more doses of that poison,” he said.

Phenol, a household disinfectant, was also detected in six products.

Mr Leibie said this is a “fairly dangerous” and “nasty” chemical that should not be consumed.

At high doses, it could result in abdominal pain, convulsions, diarrhoea, a sore throat and cause a person to go into shock and collapse.

The majority of patients were not informed of the exact amount of each active chemical present in their products or provided with an expiration date.

Dr Reggie Gaudino, vice-president for Science, Genetics & Intellectual Property at Steep Hill, a US cannabis-testing laboratory, told TND that the price of cannabis is worth up to $2400 for approximately half a kilogram.

A spokesman for the federal Department of Health and Human Services said medicinal cannabis products were available on the prescription of medical practitioners who would ensure that the treatment is appropriate for the patient in the context of their overall health plan.

“Anyone relying on cannabis oil from unregulated or underground sources needs to understand that it is firstly illegal and also potentially harmful,” the spokesman said.

The cannabis oil ‘healers’ preying on Australia’s sick and dying