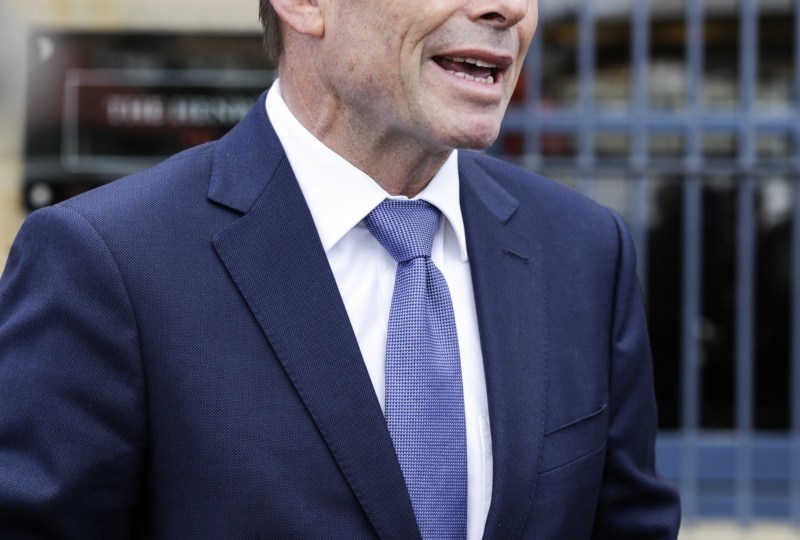 Mr Abbott said that “at least so far it is climate change policy that is doing harm; climate change itself is probably doing good – or at least more good than harm”.

“In most countries far more people die in cold snaps than in heatwaves, so a gradual lift in global temperatures, especially if it is accompanied by more prosperity and more capacity to adapt to change might even be beneficial,” he told the Global Warming Policy Foundation in a speech called Daring to Doubt.

The speech sparked a swift reaction here and around the globe, with Britain’s former Labour leader, Ed Miliband, suggesting Mr Abbott’s speech made him worse than US President Donald Trump.

“I know Donald Trump has lowered the bar for idiocy but …” Mr Miliband tweeted with a link to a Guardian article about Mr Abbott’s comments.

“Climate change is real & man-made. Not only do we owe it to our kids to act, clean growth is a trillion $ opportunity,” Ms McKenna posted.

In a wide-ranging speech, the former PM warned against declining Western moral supremacy and Christian values and rang alarm bells over the economic harm of climate-change policies.

“Environmentalism has managed to combine a post-socialist instinct for big government with a post-Christian nostalgia for making sacrifices in a good cause,” Mr Abbott said.

“Primitive people once killed goats to appease the volcano gods,” he added.

Mr Abbott also likened climate scientists to the “thought police” and argued that extreme weather events were not getting worse, but did more damage simply because there was “more to destroy”.

“Beware the pronouncement, ‘the science is settled’,'” Mr Abbott said, according to a speech posted on the think tank’s website.

“It’s the spirit of the Inquisition, the thought-police down the ages.”

“Contrary to the breathless assertions that climate change is behind every weather event, in Australia, the floods are not bigger, the bushfires are not worse, the droughts are not deeper or longer, and the cyclones are not more severe than they were in the 1800s.

“Sometimes, they do more damage but that’s because there’s more to destroy, not because their intensity has increased. More than 100 years of photography at Manly Beach in my electorate does not suggest that sea levels have risen despite frequent reports from climate alarmists that this is imminent.”

The theory must fit the facts. You can read my speech to the Global Warming Policy Forum here: https://t.co/OgsA3Muyjk

Labor leader Bill Shorten told reporters in Brisbane on Tuesday that Mr Abbott – who once ousted Malcolm Turnbull over climate policy – had “lost the plot”.

“We see Turnbull is paralysed by fear and infighting in the Liberal Party and he can’t do anything meaningful – meanwhile Australia has an energy price crisis and an energy supply crisis.”

“I accept there is a link between carbon dioxide emissions and the warming of the atmosphere (but) … there are often exaggerated and overhyped claims made,” Senator Canavan told Sky News.

“We can become more carbon-efficient, but we can do it by becoming more efficient on all fronts – power production and transport.”

Mr Abbott’s speech comes as the Turnbull government appears to be abandoning a clean energy target, one of chief scientist Alan Finkel’s recommendations.

Energy Minister Josh Frydenberg told an energy summit on Monday the government was considering its new policy against a backdrop of the rapidly falling cost of renewables and storage, greater efficiencies being found in thermal generation and the need for sufficient dispatchable power.