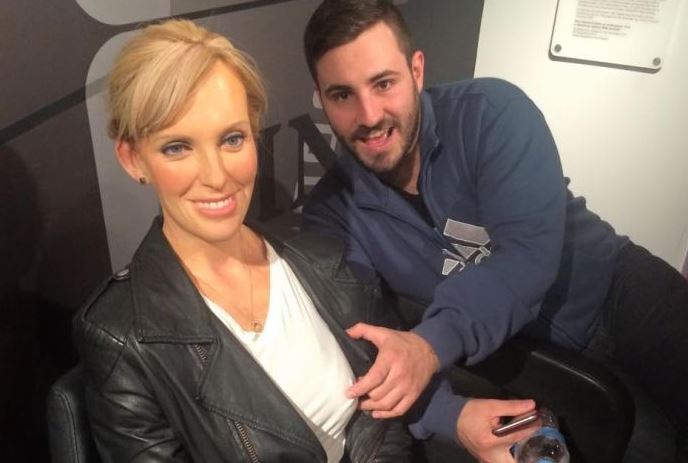 Disgraced Team Xenophon candidate Rhys Adams gropes a wax model of Toni Collette in the Facebook photo that came back to haunt him. Facebook

A Nick Xenophon candidate has been fired after the ABC uncovered photos on his Facebook page appearing to show him holding his fist to a wax figure of Rihanna and groping another of Toni Collette.

Rhys Adams, SA Best’s candidate for the electorate of Finniss, uploaded the photo to his Facebook page in 2015.

After discovering the photos, the ABC approached Senator Xenophon for comment and the candidate was promptly sacked, only hours after his candidacy was announced.

The photo with Rihanna is captioned “It’s Chris baby” and was taken at Madame Tussauds Sydney.

In 2009, Rihanna was punched in the face by her then-boyfriend and fellow musician Chris Brown. At the time photos emerged of her with a swollen, split lip, caused when Brown attacked the singer in his car.

Brown was later convicted of assault and threatening to kill, and sentenced to five years’ probation.

Senator Xenophon said he made the decision to end Mr Adams’ candidacy after being shown the photos.

“There’s meant to be a process of vetting for social media [and I am] very unimpressed and quite appalled,” Senator Xenophon said.

“I’ve spoken to Rhys Adams – he will no longer be a candidate.

“I’ve acted on this immediately because this is an issue that you cannot tolerate, particularly when it comes to domestic violence.

“I think this will give people an indication of how this campaign will be run … it will be run with crystal clarity about what we want to achieve for the state and I’m not going to let something like this get in the way.”

Mr Xenophon said Mr Adams was “embarrassed” by what had happened.

“It doesn’t mean he in any way condones domestic violence,” he said.

“It was a foolish thing to do … [and] he didn’t do it with any malicious intent, but these are things you cannot joke about it.”

Mr Adams had intended to run in the seat of Finniss, south of Adelaide, and told the ABC he regretted leaving the photos on his Facebook page.

“The photos you’re referring to are from years ago doing stupid things with a juvenile sense of humour,” he said.

“Back then I didn’t take into account those that may be hurt by a what I now reflect on as a very poor taste joke which certainly doesn’t reflect my mindset or my values.

“I am certainly sorry for any offence I’ve cause with previous Facebook posts and I wish the SA Best team the very best going forward.”

The seat of Finniss is held by Liberal MP Michael Pengilly, who will retire at the next election.

It is not the first time Senator Xenophon has run into trouble with candidates.

NXT candidate Damian Carey was also the centre of controversy last year when it was revealed he had written a paper suggesting female genital acupuncture could cure infertility.

Senator Xenophon has announced he will run Lower House candidates in the seats of Morphett, Waite, Mawson, Finniss, Heysen and Hammond.