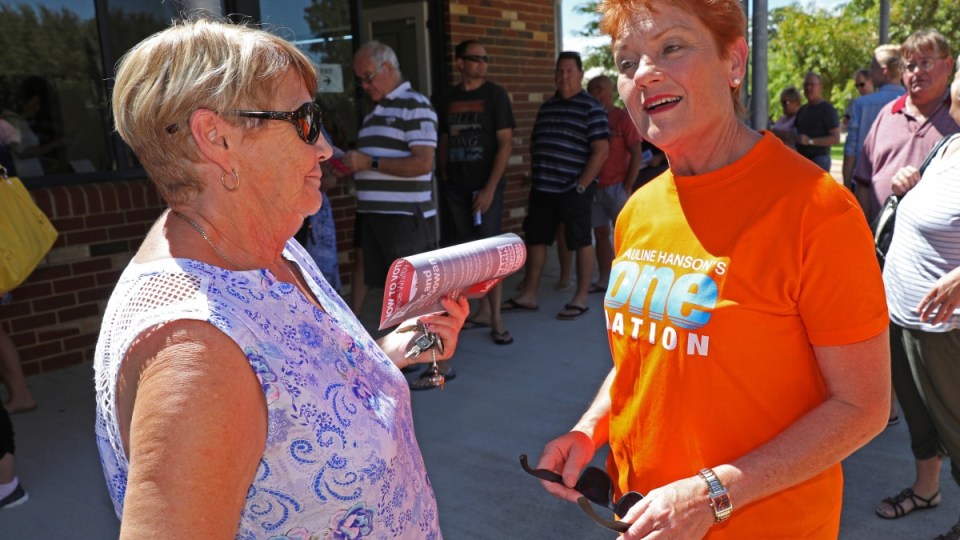 The looming state election in Queensland is being nervously watched by the major parties in Canberra.

Their apprehension was worsened by a weekend poll suggesting Pauline Hanson’s One Nation is running at 18 per cent.

The Sky News/ReachTEL poll found Labor landing on 32.1 per cent, with the Liberal National Party scoring a lowly 30.6 per cent.

Both represent a dramatic crash in support since the last election.

What has apparatchiks in the Labor and National parties scratching their heads though, is how the pollster then arrives at a two-party preferred vote of 52 to 48 per cent the LNP’s way.

The preference flows would have to behave in an unprecedented way for that to happen.

One LNP insider said the most likely result on this poll is a Liberal National minority government with the support of One Nation. Indeed, it is sure to become the focus of this year’s campaign.

Labor will hope to replicate the 1998 result when it took government after One Nation won 21 per cent of the vote. Both major parties lost seats but the Liberals and Nationals paid the higher price.

Already LNP shadow treasurer Scott Emerson is pre-emptively warning Labor will run the mother of all scare campaigns about the party entering an unholy alliance with the Hansonites.

In the past, elsewhere in the country, there would be a shrug of the shoulders with an “only in Queensland” attitude. But that is increasingly untenable.

The trend against the big parties is consolidating everywhere. It is not  quite as dire federally, but 20 per cent of voters are consistently nominating their first preference for independent or minor party candidates in opinion polls.

Since the WA state election, where One Nation underperformed, support nationally has softened. In the last Newspoll, it was 8 per cent.

A big difference: in Queensland there is only one Liberal National Party. The WA Libs dramatically miscalculated by preferencing against their traditional allies the Nationals.

It reinforced the perception of conservative government disunity and disarray.

In Canberra there is certainly Tony Abbott-inspired disunity but not quite disarray yet, although the whispers against Prime Minister Malcolm Turnbull are getting louder, encouraged by high-profile commentators.

News Corp’s Andrew Bolt says time is running out. Mr Abbott has vocal support from Radio 2GB’s Alan Jones and Ray Hadley. Both of whom are broadcast into Queensland.

One selling point, in their minds, is that a return to Mr Abbott would be to give the federal Coalition a leader more likely to appeal to Pauline Hanson-inclined voters.

Their prognostications will be given weight if One Nation turns out to be the disruptive force it appears to be threatening in the Sunshine State. One veteran Queensland Labor campaigner believes the same-sex marriage survey is not helping.

He says voters are sick of the issue and see it as another reason to be fed up with incumbent governments: annoying people and not doing their job properly.

Interestingly, Senator Hanson in recent TV interviews has been giving voice to just that sentiment.

It appears supported by a recent Essential poll finding that while a majority are in favour of the Yes position, at the same time 49 per cent do not back the postal survey as the best way to deal with the issue.

The irony here, of course, is that it was none other than Mr Abbott who foisted the plebiscite mechanism on the Liberal party and Mr Turnbull.

He may not get the result he wanted there, but if it is also contributing to the undermining of Mr Turnbull’s position he won’t mind a bit.

Tony Abbott, like Pauline Hanson, has the luxury of all care and no responsibility.