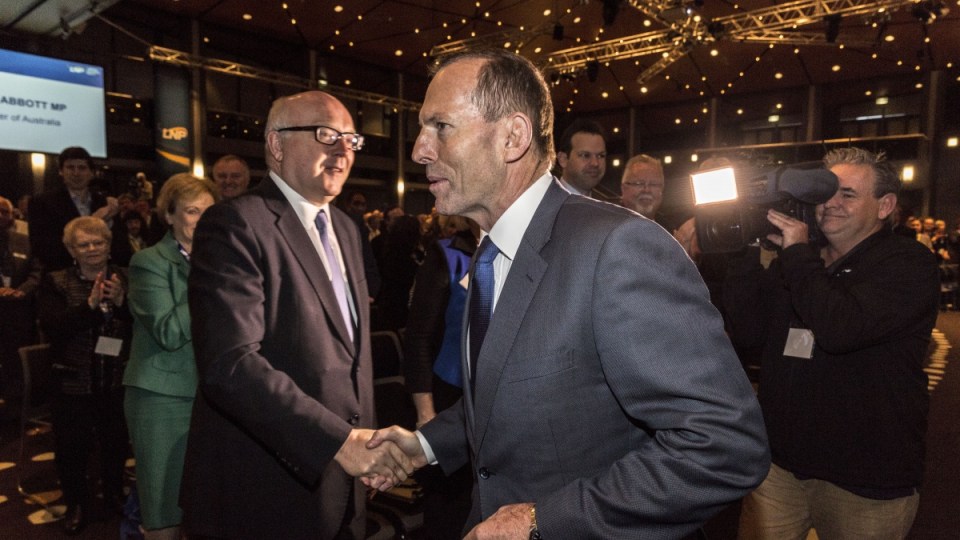 "I’m getting a lot of tweets from angry old white dudes in Australia." Photo: AAP

Mr Abbott’s daughter, Frances, also showed support for the same-sex marriage anthem on Instagram, saying the song was “what we need”.

Amid the postal survey on same-sex marriage, ‘No’ campaigner Mr Abbott hit out at the league’s decision to have Macklemore perform his chart-topping song during the pre-match entertainment at Sunday’s NRL Grand Final.

It came as a petition from former NRL player Tony Wall called for the “LGBTIQ anthem” to be banned, demanding that “LGBTIQ politics is taken out of the NRL”.

The ‘No’ campaign vehicle, the Coalition for Marriage, backed the petition.

“For Mr Abbott and anyone else to say that it should be banned I think is a bizarre thing to say,” he told the ABC on Thursday.

“I thought Mr Abbott believed in freedom of speech.”

Mr Abbott’s daughter, Frances, who has lent her support to the ‘Yes’ campaign, used social media to disagree with the former PM.

PRESS PLAY ❤️ ❤️❤️ I still remember the first time I heard this song. I was sitting in my car, about to get out to go to work… but stopped and sat and listened. And that same day I went and bought the album and kept it in my car and listened to it over and over and over again. I can’t think of a better song for all the hundreds of thousands of people to listen to on Saturday 🏉… This is what we need right now. Go harder @macklemore 🌈✌️#stillnotinterestedinpolitics #justsaying #loveislove #lovewillwin #voteyes #itstime #postalvote #getaroundit #marriageequality #samelove #sweat #goodthingscometothosewhosweat #turnitup #singitloud #singitloudandproud

Immigration Minister Peter Dutton, also a ‘No’ supporter, said organisations such as the NRL has to “get a backbone” and “stand up to some of this political correctness”.

“When I take my kids to the footy, I want them to be able to watch the footy, I don’t want some political message jammed down their throat,” he told 2GB.

A certificate on paper isn't gonna solve it all.

But it's a damn good place to start.#VoteYes#GoStorm#NRLGF

Macklemore said he was bewildered by the proposed ban.

“It’s interesting actually cause I’m gonna play Same Love and they’re going through trying to legalise same-sex marriage in Australia,” he said on the US radio show The Cruz Show.

“So I’m getting a lot of tweets from angry old white dudes in Australia. Today I think there is a petition to ban me from playing.

“It’s interesting times in Australia and I’m heading on a flight over there later tonight.”

The interviewer then suggested Macklemore should “go harder” in response to the controversy.

The petition has attracted more than 7000 signatures, but the NRL has stood firm, confirming Macklemore will still be performing the song on Sunday.

“He’s playing four of his biggest hits, one of those will include that song and we’re very comfortable with that,” NRL boss Todd Greenberg told 2GB.

Mr Greenberg said the code supported same-sex marriage and was committed to being an “inclusive game”.

Same Love, which hit no.1 on the ARIA charts when it was released in 2012, features the lyric: “No freedom til we’re equal, damn right I support it.”

The argument over Same Love is part of a wider global debate about the relationship between sporting codes and social issues.

Donald Trump has been at the centre of a similar political fight in the US as athletes protest the deaths of African-Americans by refusing to stand for the national anthem.

Last week, the AFL illuminated its logo in rainbow colours at its Melbourne headquarters, much to the anger of some ‘No’ advocates.

A number of clubs have also backed the reform while others have been criticised for failing to do so.

“But who in the hell are these people at the AFL who are telling the football public what they should do in their lives and who they should vote for in any political agenda — who are you?” he said on the show.