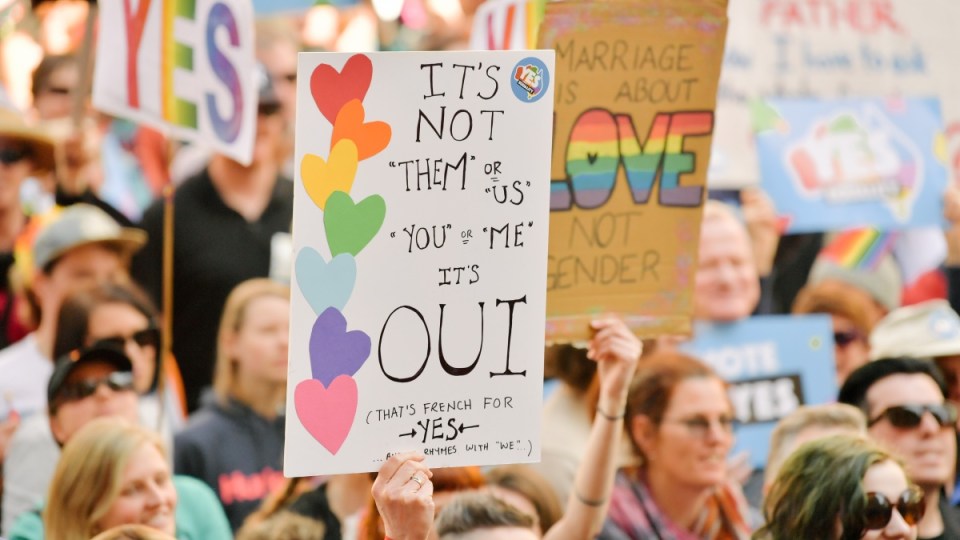 'Yes' campaigners have so far focused on positive themes of love and equality. Photo: AAP

The ‘No’ camp has escalated the fight against same-sex marriage with skywriting across Sydney and spectacular claims that the thoughts of Australians will be criminalised.

Prominent ‘No’ campaigner Cory Bernardi, leader of the Australian Conservatives, said at Saturday night’s ‘No’ campaign launch that if the Parliament redefined marriage, “it also redefines how you can speak, think, advocate and believe about marriage”.

To cheers from the crowd, Senator Bernardi warned of “criminalised” thoughts, “weaponised” anti-discrimination laws, “Section 18C on steroids” and “legal warfare” if the definition of marriage was changed.

Senator Canavan told the ‘No’ launch that the other side of the debate “want to make it illegal to just express a different view about marriage”.

The ‘No’ campaign also took their message to the skies of Sydney on Sunday morning, by writing the words ‘Vote No’ above the city’s inner-west.

At ‘Yes’ events around the country on Sunday, advocates dismissed these tactics as “scaremongering”.

Magda Szubanski, Liberal cabinet minister Christopher Pyne, Labor’s Penny Wong and Greens Senator Sarah Hanson-Young were among the big names who rallied the ‘Yes’ vote at events across the country.

Mr Pyne said Senator Bernardi and others on the ‘No’ side wanted Australians to be “frightened of the otherness in our community”.

“That has been a hallmark of ultraconservatives for centuries; to sow fear in the community, whether it’s against our neighbours within our country or those from overseas or those of different cultures,” he said.

“And if Senator Bernardi or anybody else thinks that is the best way of getting a ‘No’ vote, by negatively campaigning, well good luck to them, but I’m campaigning on the side of positive social change.”

Opposition Leader Bill Shorten on Sunday described arguments that went beyond the question of marriage as “white noise”.

“This is a straightforward survey. Australians are just being asked: do you support the right of some people to get married to the person they love or not? I think the answer is pretty clear, the answer is yes,” he said.

Senator Bernardi told the 1500-strong audience at the Sydney Convention Centre that same-sex marriage would lead to “legal warfare” against opponents.

“We’re under assault because we’re on the right side of legal and moral history,” he said.

Senator Bernardi pointed to state and territory anti-discrimination laws, which are unpopular with some free speech advocates and described the postal survey protections passed by Parliament last week as “18C on steroids”.

“You can imagine the flood of claims, the legal warfare, the barrage of abuse and insults because you’re starting to question what your children would be taught in schools, or you dare not to recognise a couple as a married couple because they happen to be of the same gender,” he said.

Christine Forster, a gay Sydney Liberal councillor, said on Sunday the ‘No’ side was seeking to expand the debate beyond marriage in order to exploit people’s fears and uncertainty.

“The No campaign is trying to muddy the waters with issues that are not related,” said Ms Forster, who is Tony Abbott’s sister.

“The reality is marriage law has changed in Australia 20 times since 1961 when the Marriage Act was legislated.

“Any talk about anything further than that is simply designed to frighten people and that’s not right.”

Ballot papers are due back on October 27 with the result to be announced on November 15.