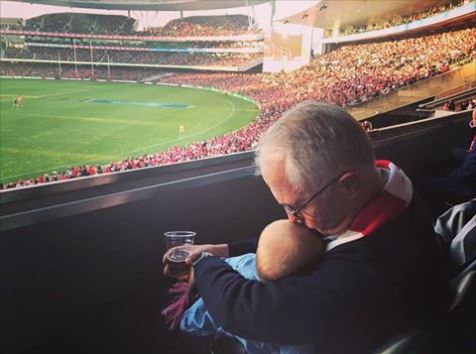 What's all the fuss about? A tweeted picture of Malcolm Turnbull and his grandchild prompted a ludicrous social media debate about holding a baby while drinking a beer at the football. Most saw the photo for what it was, a tender moment. Photo: Twitter

A photograph of the Prime Minister holding his granddaughter and cup of beer at an AFL final over the weekend has led to a rare moment of political unity in the nation’s capital.

Malcolm Turnbull attended the Sydney Swans versus Essendon match in Sydney on Saturday and was snapped holding his baby grand-daughter Alice and a plastic cup of beer with the hashtag #multitasking.

But when the picture was posted to Facebook, readers criticised the PM for being “irresponsible” and said “not a good example being set here”. He was also labelled “disgusting”, with one critic adding that Mr Turnbull was “breathing grog all over” the baby.

Another commenter linked the PM’s day out with the gay marriage vote: “Wasting 150 million dollars and watching the footy at the same time. #multitasking,” they wrote.

But a deluge of positive commenters quickly turned on the critics, and on Monday they were joined by the PM’s most senior rival.

I've found something Malcolm & I can agree on. This is rubbish. Let him be a grandpa. https://t.co/gzF7plgBdw

Greens senator Sarah Hanson-Young added her voice to the debate, telling Channel Seven: “If anything this has made the Prime Minister look a bit more personable to the public.”

“But now that it’s out there I think it’s important that we say Australia is not a nanny state,” he told reporters in Canberra.

“It’s ok to have your granddaughter in one hand and a beer in the other.”

I support the PM! #multitasking pic.twitter.com/bWKNFjhWY8

While political opponents offered public support for the PM, many voters who said they would not support the PM at the next election also praised the photo.

“I am a staunch Labor supporter however I find this pic endearing,” said Phona Carolin on Facebook.

Jamie Colley wrote: “As much as I despise most in the lib/national parties, anyone complaining about a man enjoying a beer and spending time with his family needs a slap on the forehead.”

The PM himself took to radio to defend the photo, putting the storm in a beer cup down to the “craziness of social media”.

“As long as you’re comfortable in your own skin, and you’re just being yourself, being natural, that’s all you can do,” he told Triple M’s Eddie McGuire.

“Anything else and you end up being as crazy as some of the trolls on Twitter.”