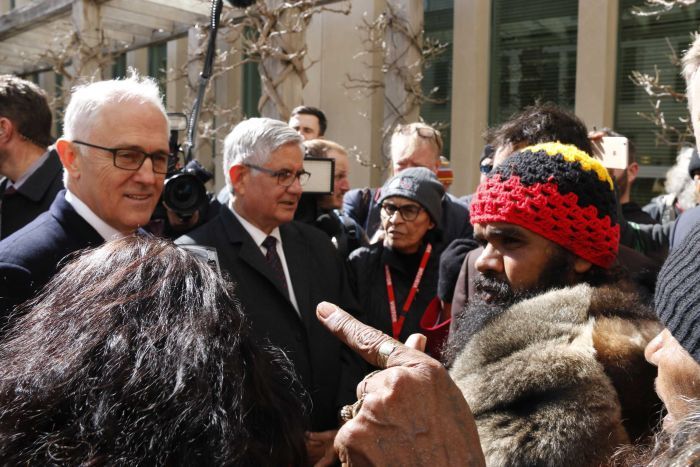 "I was really disappointed you didn't come out the front to talk to me." Photo: Supplied/ABC News

It was not the meeting either man hoped for.

Clinton Pryor walked for a year from Perth to deliver a message of Indigenous justice to Prime Minister Malcolm Turnbull.

But the 27-year-old man and his entourage of elders and supporters from Kalgoorlie began their meeting disgruntled, after they were asked to walk around Parliament House to meet Mr Turnbull at his private courtyard.

“It got me a bit upset to walk all the way out the back, after I had walked 6000 kilometres to come here to see him,” Mr Pryor said.

Mr Pryor left Perth in protest against the forced closure of Aboriginal communities, but as he journeyed through remote towns he collected the stories of Indigenous Australia, and his message became a call for treaty from those communities.

They expressed concern over cashless welfare cards and Elijah Doughty’s death in Kalgoorlie, among other issues.

Mr Turnbull told the crowd the cashless welfare card was designed to “protect children”, before he was called away.

Mr Pryor said a brief word to the Prime Minister as he left.

“It was a great honour to meet you, but I was really disappointed you didn’t come out the front to talk to me,” Mr Pryor said to the Prime Minister.

“Well I’m sorry you couldn’t come in so I could make you a nice cup of tea,” Mr Turnbull replied.

Out the back of Parliament House, Mr Pryor defended his supporters.

“I was really proud that my aunties and uncles and elders spoke from their heart, because they were hurting too,” he said.

“They have my full support and backing, because they are my people.”

The Wajuk, Balardung, Kija and Yulparitja man also met with Opposition Leader Bill Shorten yesterday, in what was a more subdued conversation outside the front of Parliament House.

At that meeting, Mr Shorten reiterated his support for a treaty.

“You can’t have real healing unless everyone’s doing this together, and like you said, you don’t want to do this divided, two separate walks or two separate groups, I get that,” he said.