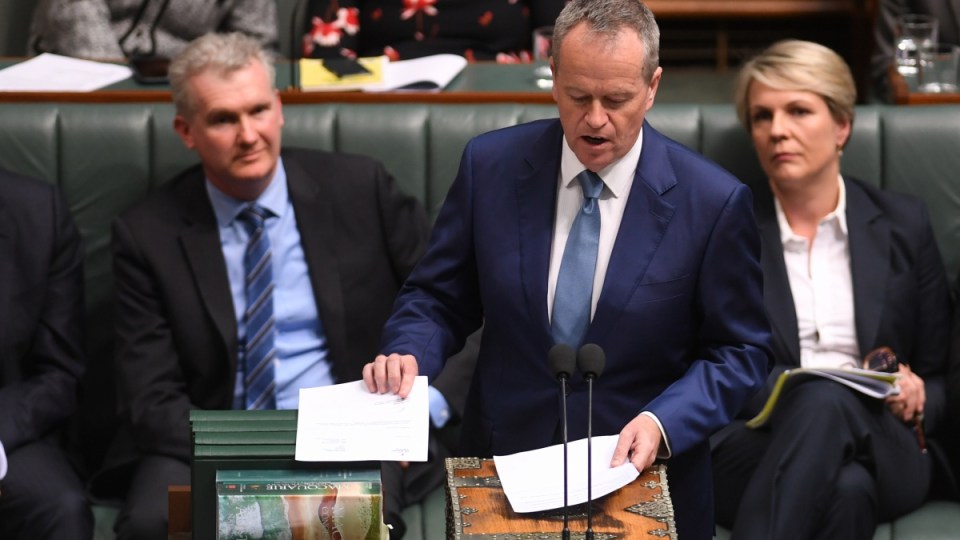 Opposition Leader Bill Shorten has ended speculation that he is a dual citizen, producing a letter from Britain’s Home Office that proves he renounced his British citizenship before entering Parliament.

The letter, tabled in Parliament at the end of Question Time on Monday, states that Mr Shorten applied to renounce his UK citizenship on May 15, 2007, and that the application was approved on June 26, 2007.

Mr Shorten, who entered Parliament at the 2007 federal election, said he was tabling the document to “put an end to baseless allegations, not reward them”.

“I accept that if I want to be elected Prime Minister there cannot be any doubt about my constitutional eligibility, pushed by the conspiracy theorists like the Prime Minister and the Member for Warringah [Tony Abbott],” he said.

“I strongly believe that MPs and senators should not be forced to produce evidence to counter claims that are made completely without evidence.”

Earlier on Monday, former prime minister Tony Abbott told the Opposition Leader that he should “show it or shut up”.

Mr Shorten’s move may now put pressure on other MPs to prove they have renounced dual citizenship they once held.

That includes Liberal MP Ann Sudmalis and Labor’s Justine Keay, who are yet to produce documents to prove they are not dual citizens.

Ms Sudmalis said at an August 25 media conference with the PM: “As soon as Bill Shorten tables his paperwork, I’ll put mine on the table.”

Earlier she had said: “The UK Home Office have confirmed to me that I do not hold and have never held British citizenship.”

Ms Keay has provided a detailed timeline of events that stated that she renounced her citizenship before nominating for Parliament.

Mr Shorten said on Monday that MPs should not be forced to produce the evidence to counter such claims, “no matter which party they are from”.

“This is our chance to draw a line in the sand. This must end. In an age of Twitter trolls, baseless online conspiracies, this is a chance for our Parliament to declare we are bigger and better than this,” he said.

The Prime Minister also pressured Mr Shorten to provide the renunciation letter, telling Parliament: “He claims to have renounced his UK citizenship. Where is the proof?”

Mr Shorten later said: “I suspect the Prime Minster and his colleagues knew the claim about me to be completely false.”

Labor’s Katy Gallagher, who has faced questions over possible Ecuadorian nationality, clarified her status in a statement to the Senate on Monday morning.

Senator Gallagher said her mother, who was born in Ecuador, had never received an Ecuadorian birth certificate.

“During her life she never took any steps to attain citizenship of Ecuador. My mother was never an Ecuadorian citizen,” she said.

The former ACT chief minister said Labor had sought legal advice from two experts, Ecuadorian citizenship expert Gabriel Echeverria and Melbourne QC Matthew Collins, who both backed the view she was not an Ecuadorian citizen.

Senator Gallagher had previously declined to provide more details despite question from media including The New Daily.