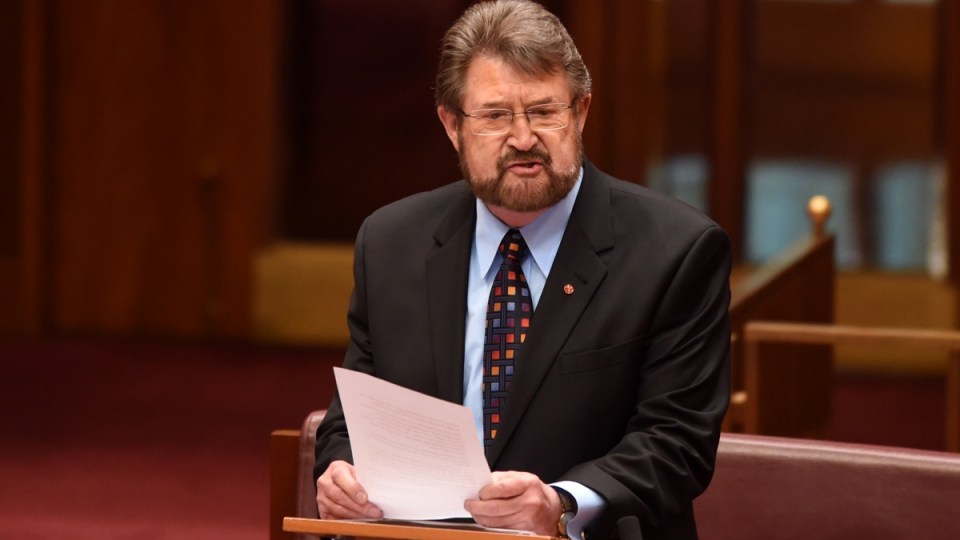 Senator Derryn Hinch has had no sympathy for others caught in the dual citizenship saga. Photo: AAP

Crossbench senator Derryn Hinch may refer himself to the High Court after his stint working in the US over 40 years ago has put his eligibility to sit in the Senate in doubt.

The Victorian senator has confirmed that he still holds a US social security card from his time living in New York in the 1960s and 1970s, which could be a breach of the constitution.

Section 44 of the constitution not only bans anyone with allegiance to a foreign power from sitting in parliament, it also disqualifies anyone who is “entitled to the rights or privileges of a subject or a citizen of a foreign power”.

Senator Hinch said he would seek legal advice, and acknowledged he could join the ranks of seven other parliamentarians already facing the High Court over their eligibility.

“I plan to raise the issue with the solicitor-general and, if necessary, will refer myself to the High Court, acting as the Court of Disputed Returns,” he said in a statement.

But the crossbencher said he was confident that he was not in breach of the constitution.

“I’ve read section 44 more times than anybody… I thought I ticked all boxes, I still think I do,” he told Sky News.

Senator Hinch told the ABC he had not accepted the ‘rights and privileges of a foreign power’ as prohibited by Section 44.

“I paid a special social security tax for 10 years, on top of regular income tax, which makes me entitled to a pension. That’s not a privilege. It’s payment for that tax I paid in the 1960s and 1970s,” he said.

Senator Hinch also said he wrote to the US Social Security Department instructing them not to pay him a pension.

The influential crossbencher renounced his New Zealand dual citizenship before entering Parliament – and has previously said he had “no sympathy” for “dual citizenship slackers” who have been engulfed by the controversy.

Senator Hinch is also standing by his call for an independent audit of all parliamentarians over dual citizenship, despite the question mark now hanging over his own election.

The doubts over Senator Hinch’s status comes after constitutional expert George Williams told the National Press Club on Wednesday he wouldn’t be surprised if an audit uncovered 20 or more MPs with eligibility problems.

Professor Williams said there would be some advantages in having an audit rather than problems emerging ad hoc.

“Perhaps an audit is something we may need to look at after the High Court makes its decisions,” he said.

Five members of parliament, including Deputy Prime Minister Barnaby Joyce, face a High Court test in October over their eligibility to serve in Parliament.

An additional two MPs, including cabinet minister Fiona Nash, are set to be referred to the court by Parliament next week.