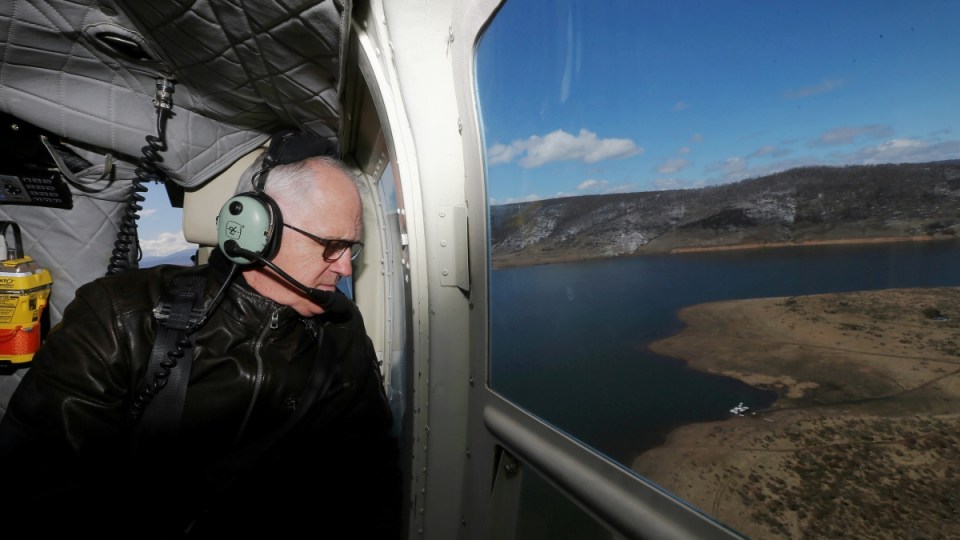 In a piece of well-orchestrated media management for the TV cameras, Malcolm Turnbull took a helicopter ride over the Snowy scheme.

It was to reannounce a feasibility study into substantially expanding its capacity to produce hydro-electricity. Mr Turnbull proudly proclaimed he is the first Prime Minister to promote massive storage as the answer to stabilising renewable energy “when the sun doesn’t shine and the wind doesn’t blow”.

The Prime Minister has plugged into the biggest cost-of-living issue hitting households. Electricity bills with increases of more than 20 per cent have begun shocking many households already struggling to make ends meet.

The plan is twofold: Be seen to be addressing the problem and blame Labor for it.

Addressing the issue is no quick fix as Mr Turnbull admitted with an icy Cooma wind making for a very uncomfortable news conference.

The $29 million feasibility study which has already begun may throw up engineering difficulties that could blow out the costs well beyond the guesstimated $2 billion and the timeframe beyond six years.

The Prime Minister, he said, would achieve more if he was back in his Canberra office “pulling the trigger” on export controls to make sure that there is enough gas for Australian industry.

To make the point he visited a Melbourne factory with an annual energy bill of $50 million. Mr Shorten said four months ago, after threatening gas producers with export restrictions, the PM promised to halve gas prices. He hasn’t delivered on that.

Mr Turnbull shot back: when in power Labor put in no protections for domestic gas supply, thus allowing Aussie gas to be exported more cheaply than is now being charged on the home front.

The Prime Minister’s problem is the Liberals have now been in power for four years. Consumers are far from impressed with political duck shoving they demand the incumbents start delivering.

Mr Turnbull needs little prompting here. He has called electricity industry bosses back to Canberra for another dressing down. Four weeks ago he claimed they had got the message that they need to make consumers aware of cheaper plans rather than profiting from their customers’ ignorance or inertia.

The PM has been stung into action by a consumer watchdog audit. The ACCC has found that one million households are locked into deals which have them paying 25 per cent more than they need to.

If energy is going to be the circuit breaker the government desperately needs to regain the political ascendancy, Mr Turnbull needs to do much more than blame Mr Shorten. He needs to stare down the coal barrackers in the government who are blocking the policies that industry and business are demanding for substantial long term investment.

Without it, energy prices will continue to skyrocket. The sort of investment that is awake to the market factoring in climate change and the imperative of reducing emissions.

Mr Turnbull brazenly claimed Labor had no plans in this space, but its shadow minister Mark Butler has a book full of them. They involve the Finkel clean energy target and gas as the preferred baseload source for transition to greater reliance on renewables.

The clock is ticking for the nation. Old, emissions-belching coal-fired plants are reaching the end even of their extended lives.

Expecting taxpayers to foot the bill to replace them with more coal power stations, as Tony Abbott is urging, is recklessly short-sighted.