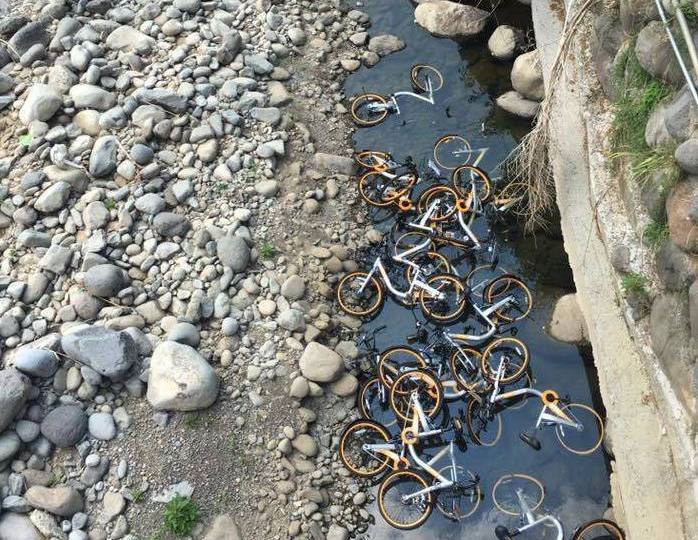 Controversial bike-sharing service oBike has been accused of causing visual pollution, with thousands of rental cycles being abandoned in city streets across Australia.

Melbourne and Sydney residents have reported seeing the dockless, GPS-tracked bikes dumped in trees, rivers and on roofs since their arrival in Australia earlier this year.

And the growing issue of clutter may be set to increase as the company plans to expand nationwide.

More than 1000 yellow oBikes have been deployed in 17 Melbourne suburbs since its pilot launch on June 15, with another 500 bicycles later released in Sydney.

Meanwhile, another ride-sharing company Reddy Go – which launched in July – has 650 red rentals available in Sydney, with that number expected to jump to 6000 before Christmas.

One person not getting on board is Melbourne Lord Mayor Robert Doyle, who has decried the schemes as a nuisance to local councils thanks to bikes being inconveniently scattered across the city.

“We work hard to keep the city free of clutter. They are clutter, and that must be fixed,” Mr Doyle said earlier this month.

“Frankly I’m tired of seeing them left on various footpaths in and around the city, either left where their journey ended, or occupying public bike parks.”

And the issue isn’t isolated to Australia, with the Singapore-based company oBike operating in 40 cities and 11 countries worldwide.

In August, councils in Taipei, Taiwan, and London’s Wandsworth have either banned or confiscated the flexible bike-rental service for littering city streets.

oBike head of marketing Chethan Rangaswamy told The New Daily the company has identified this as a “challenge”, but said the issue had been blown out of proportion.

He claimed only “three to five” Melbourne bikes have ended up in trees, or alternatively, the Yarra River.

Someone dumped this #obike in the Yarra! Please send my reward! 😆 pic.twitter.com/1Sm0vIEbMS

Helmets, however, have had a higher attrition rate. oBike estimates around 40 per cent of their helmets have been stolen in an issue described as unique to Australia because it’s the only country in which it operates that has mandatory helmet laws.

The challenge of the “frequent” theft took oBike “by surprise”, says Mr Rangaswamy.

So far, the company has “just replaced them as a short-term solution”, he says, but, “in the long run, we will be looking at lockable helmets”.

How do these bike-sharing services work?

oBike and Reddy Go services operate through mobile apps, where users pay a one-off membership fee of $69 and $99 respectively, and $1.99 per half-hour ride.

Once a member, users can locate the nearest bike and reserve it for a limited time.

The bike unlocks when a customer types its ID into the app or scans its QR code with a smartphone. Users manually lock the bike after their trip.

Unlike other ride-sharing services, oBike and Reddy Go bicycles are GPS-tracked and do not require a permanent docking station, which allows the bikes to be left, and picked up, in different public locations.

But despite the problem of abandoned bikes, the service appears to have established some market acceptance, with 5000 Melbourne residents and 1000 Sydney riders downloading the app.

Mr Rangaswamy said 90 per cent have been used, with each bike being used for an average of 10 trips. He said oBike use peaked on weekends with ride numbers clocking over 1000 per day.

The company is looking “carefully” at other cities in Australia, he says, and will announce its expansion plans later this year. Reddy Go marketing director Christy Geng said it also expects to report its expansion to other states “soon”.

Lordy wonder what the fine is going to be for this #obike drop off pic.twitter.com/KRS2WZ7Sr6