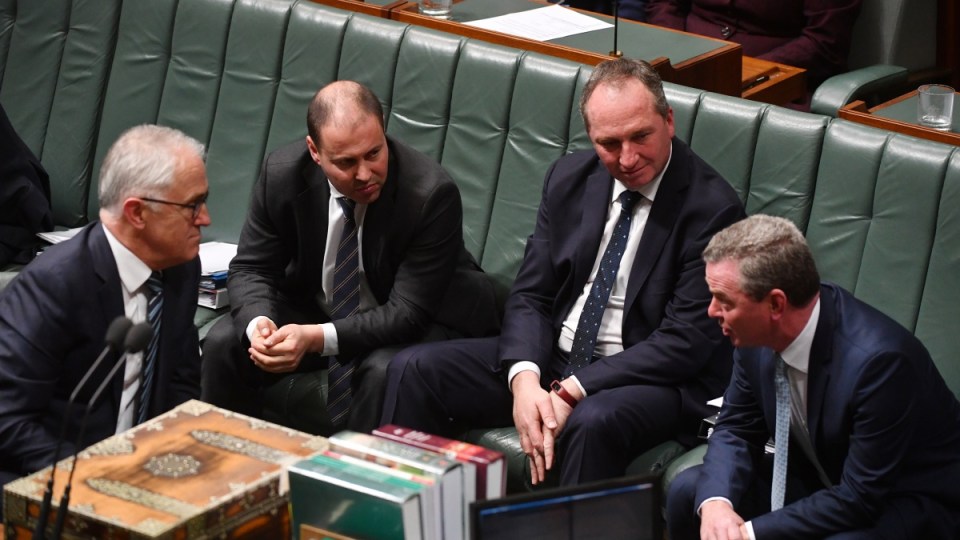 The government will wait for the High Court's decision. Photo: AAP

The High Court will consider the future of Deputy Prime Minister Barnaby Joyce in October, ensuring the citizenship crisis that has engulfed Federal Parliament will drag on for months.

At a directions hearing on Thursday, the court determined it would hear the cases of Mr Joyce, senators Matt Canavan and Malcolm Roberts and former Greens Larissa Waters and Scott Ludlam on October 10, 11 and 12 in Canberra.

Those dates were set despite the government’s lawyer, Solicitor-general Stephen Donaghue, requesting the cases be heard in a fortnight’s time. Senator Roberts’ lawyer had asked for the hearings to be pushed back.

Chief Justice Susan Kiefel said she understood the “unusual circumstances” of the challenges, and the “high level of urgency”, given it will impact the current make-up of the Parliament.

But she did not believe the matters could be dealt with in that time.

Chief Justice Kiefel also said it was likely the court would hear the cases of Deputy Nationals leader Fiona Nash and Senator Xenophon on the same days.

Both have revealed they hold dual citizenship and will be referred to the court when Parliament returns on September 4.

Mr Joyce’s case will be based on whether or not he knew he was a citizen of New Zealand, his barrister, Gerald Ng, told the court.

According to the government, elections of Senator Canavan, Mr Joyce and also former senator Waters should be upheld, solicitor-general Dr Donaghue said.

Ms Waters resigned from her position after learning she held Canadian citizenship.

In a surprise revelation, Senator Canavan’s barrister David Bennett also conceded the Nationals politician was already an Italian citizen by descent, even before his mother registered him for citizenship without telling him.

That was due to a change in Italian law in the 1980s, the court heard.

Mr Bennett will argue that citizenship by descent should not apply under section 44 (i) because that would disqualify a huge proportion of the population.

He said court would be presented Australian Bureau of Statistics data to back up this claim.

Section 44(i) states that a person is disqualified from running for office if they are a subject or citizen or entitled “to the rights or privileges of a subject or a citizen of a foreign power”.

Senator Roberts’ case is expected to revolve around the steps he took to renounce his citizenship, the court heard.

The High Court determined in 1991 that a person would remain eligible to stand if they took “all reasonable steps” to renounce the citizenship of a foreign power.

There was no disagreement that Mr Ludlam was ineligible.

Chief Justice Kiefel also ruled former independent MP Tony Windsor could be a party to the case, allowing him to argue that Nationals leader’s election should be struck out.

Mr Windsor, who lost in New England to Mr Joyce last year, has not ruled out running against his rival again should the court decide a by-election is required.

Prime Minister Malcolm Turnbull said on Thursday he was confident the court would rule in the government’s favour.

“I have to say again, we are very, very confident that our members who have been caught up in this will be held by the court to be eligible to sit in the Parliament and therefore eligible to be ministers,” he said.