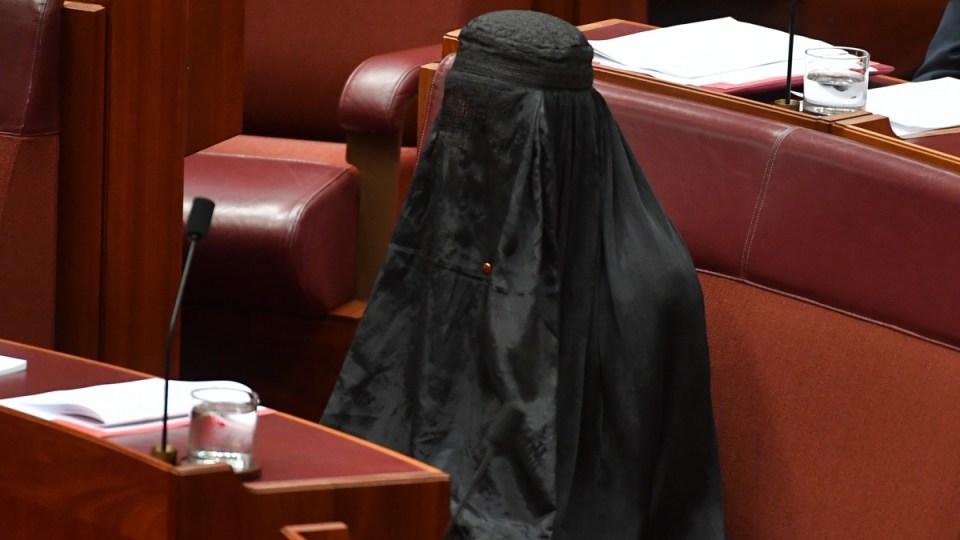 Pauline Hanson wearing the burqa in the Senate. Photo: AAP

One Nation Leader Pauline Hanson walked into the Senate wearing a burqa on Thursday afternoon in a parliamentary stunt branded “appalling” by Attorney-General George Brandis.

During Senate Question Time, Senator Hanson entered the chamber dressed in the religious garment and sat wearing it for more than 20 minutes.

When it was her time to ask a question, she rose to her feet and tore off the burqa, sparking outrage from all quarters of the chamber.

“I am quite happy to remove this because this is not what should be in this Parliament,” she said.

“Senator Brandis, in light of our national security in this nation, will you work to actually ban the burqa in Australia?”

Senator Hanson linked the garment to terrorism and claimed that a large number of Australians supported a ban.

In an unequivocal condemnation of Senator Hanson’s stunt, a furious Senator Brandis said the government did not support a ban.

“Now, Senator Hanson, I am not going to pretend to ignore the stunt that you have tried to pull today by arriving in the chamber dressed in a burqa,” he said.

“We all know you are not an adherent of the Islamic faith.

“We have about half a million Australians of Islamic faith. And the vast majority of them are law-abiding, good Australians. And Senator Hanson, it is absolutely consistent with being a good, law-abiding Australian and a strict adherent Muslim.”

Senator Brandis said the advice he’d received from authorities as a minister responsible for national security was that “it is vital for their intelligence and law enforcement that they work with the Muslim community”.

He added, seeming to fight back tears: “To ridicule that community, to drive it into a corner, to mock its religious garment is an appalling thing to do. I would ask you to reflect on what you have done.”

Senator Brandis’s comments drew a standing ovation and sustained applause from Labor and the Greens in what must go down as one of most extraordinary moments witnessed in the Senate.

Senator Hanson then asked the Attorney-General if the government would ban the burqa in the Parliament as a “security risk”.

Senate President Stephen Parry said the issue was up to him and Speaker Tony Smith, not the government.

Senator Parry said he and Mr Smith always made an effort to ascertain the identity of anyone entering the chamber, and he had been able to do so when Senator Hanson walked in on Thursday.

In response to Senator Hanson’s question, Senator Brandis responded: “No.”

Senator Hanson then left the chamber, burqa in her hand, amid cries of “shame on you” from the opposition benches.

Labor’s leader in the Senate, Penny Wong, congratulated Senator Brandis for his rebuke of the One Nation leader’s stunt.

“It is one thing one thing to wear religious dress as a sincere act of faith, it another wear it as a stunt here in the chamber,” she said.

Labor Senator Sam Dastyari, who identifies as a non-practising Muslim, said the stunt was “hurtful, offensive and wrong”.

Senator Hanson clashed with ASIO head Duncan Lewis during Senate Estimates earlier in the year over the burqa.

Mr Lewis rejected her claims that the garment was a security risk.