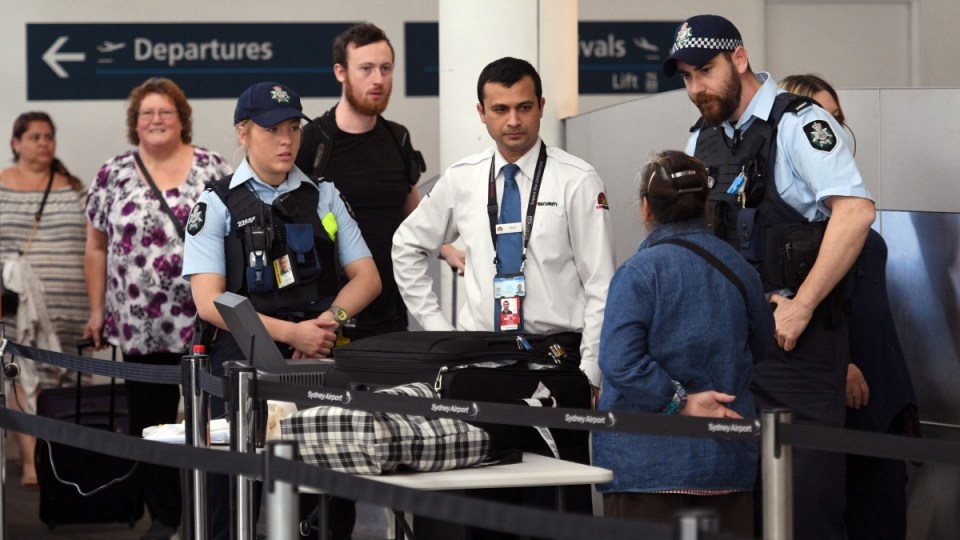 Airport workers will be subjected to spot explosive testing as part of an upgrade of security at Australian airports. Photo: Getty

Security personnel at Australian airports lack the “major ingredients” to protect air travellers, including the ability to visually identify someone about to launch an attack, a leading aviation safety expert warns.

Extra security measures to protect passengers were announced over the weekend after authorities detained four men over an alleged plot to bring down a passenger jet.

But Homeland Security Asia/Pacific chief executive Roger Henning, a counter-terrorism expert who has worked at the highest levels of government, told The New Daily that airport employees were not trained to assess travellers who may be poised to commit a violent attack.

“Human intelligence (reading people’s face and body language) is the oldest form of intelligence gathering and it doesn’t exist [in Australia].

“There is no human intelligence methodology in any airport in Australia except Avalon.

“What we have is a whole pile of people at international or major airports looking at screens … We cannot go on like this, there will be a mass-casualty event.”

Mr Henning has worked as a counter-terrorism specialist for the past 17 years, and prior to that as an issues and crisis manager, including the onsite risk assessment at the 1996 Port Arthur Massacre.

The comments followed reports that the four men arrested for the airline conspiracy may have attempted to smuggle their homemade bomb onto an international flight prior to raids, law enforcement officials told ABC.

The ABC also reported the men may have then developed an alternate plan after that failed attempt and tried to get the device onto a domestic flight.

Passenger, hand and checked luggage screening has been increased at all Australian airports after counter-terrorism officers arrested four Sydney men – believed to be two fathers and their sons – accused of plotting to bring down a commercial flight with a “non-traditional device”.

The government refused to reveal details of the alleged plan, as media speculated the men intended to use an improvised bomb inside a meat grinder or release poisonous gas such as sarin inside the aircraft. It said the plan had “an Islamist, extremist terrorist motivation”.

Domestic passengers were being told to arrive two hours before flight departures, and international passengers three hours before, to allow for tougher checks including more intensive screening for explosives.

However, expanded luggage searches and passenger screenings are not a “total solution”, according to Mr Henning.

“To be silly enough to even suggest that increasing bag searches on its own is going to do the trick isn’t to be taken seriously at all.

Mr Henning called on the government to pursue greater training for airport employees and for all domestic travellers to be made to produce photo identification when checking in.

“The major things that are missing particularly on domestic flights in Australia is the matching of the passengers with the boarding card. In Australia if you go a library, a bowls club or an RSL club you have to show photo ID [but not an airport],” he said.

“It’s very simple and happens regularly. Criminals use it, terrorists have used it to get a ticket online using a dodgy name or a dodgy credit card and they can get a boarding pass sent to them and produce it at an airport and travel unchallenged.

“It means flight crew have no idea who is in the cabin behind them, no idea.”