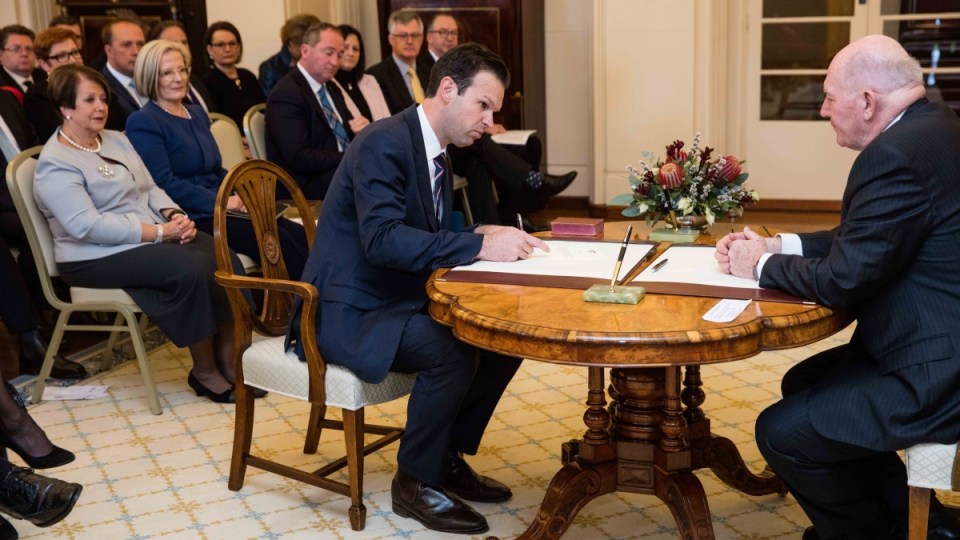 Senator Canavan returned to cabinet after he was cleared by the High Court. Photo: AAP Photo: AAP

Nationals senator Matt Canavan faces an “uphill battle” to remain in Parliament, according to one constitutional law expert, with most legal academics unsure how the High Court will rule when it decides his political future.

Senator Canavan, considered a rising star within the Nationals, resigned from Cabinet on Tuesday night after saying his mother had signed him up for Italian citizenship and never got around to telling him.

Although Attorney-General George Brandis confirmed the government would ask the High Court to rule on Senator Canavan’s eligibility, constitutional law experts say his future in Parliament is unclear.

“When you read section 44, paragraph 1, it seems black and white that if you are a citizen of a foreign power, you’re not eligible to be elected into the Senate or the House of Representatives,” constitutional lawyer and University of New South Wales associate professor Gabrielle Appleby told The New Daily.

But Associate Professor Appleby said the court had previously interpreted that provision “with a little bit of flexibility” in circumstances where “the individual has not been at fault”.

“There may be a small amount of flexibility here, but ultimately we’ll just have to wait and see,” she said.

Yet she warned there were too many unanswered questions about Senator Canavan’s situation to make a definitive call about the case.

“The High Court has never seen a case quite like this,” she said.

That uncertainty was echoed by other constitutional lawyers, such as University of Melbourne Professor Emeritus Cheryl Saunders, who told The New Daily: “No one knows how the [High Court] will decide this case.”

Under section 44 of the Constitution, Australians are not eligible to stand for election if they hold citizenship of another country.

However, the court has previously ruled that if an MP takes all reasonable steps to renounce their citizenship, they remain eligible.

Senator Canavan claimed on Tuesday night that his mother, Maria, had applied for Italian citizenship on his behalf without telling him when he was 25 years old, and that he had never signed any forms or made contact with the Italian Consulate.

Ms Canavan, who was born in Australia, had gained citizenship through her own parents, who were both Italian-born.

On Wednesday, a number of Australian-Italian citizens, including ABC journalist Emma Alberici, wrote online that they had been required to sign forms and attend interviews in order to gain citizenship.

The Italian Consulate in Brisbane would not comment on the process required to gain citizenship and referred The New Daily to the Italian Embassy in Canberra, which did not respond to a request for comment.

“He never signed a form, and, of course, one would presume that if something happens without your knowledge, and without your consent, then it’s probably an invalid process,” Mr Joyce said.

Labor’s Opposition Leader Bill Shorten said he did not doubt Senator Canavan’s story, but described it as “very unusual”.
“I think the Italian Consulate could probably provide – it would be good if they could release – any documentation around this matter,” he told ABC Radio.
Follow Us

Matt Canavan faces an ‘uphill battle’ to remain in Parliament