When it comes to leadership battles, the first casualty always seems to be the truth.

Between the politicians doing the battling, and the media doing the reporting, a blizzard of little white lies and medium-sized porkies can blind and disorient hapless voters as we try to make sense of what’s happening.

The media is at least halfway responsible for this subterfuge. The ‘best’ leadership stories rely on anonymous sources to provide the juiciest gossip.

But because the source is unknown, the reader must rely on the reporter to put the comments in context, and sort the whingeing from the plotting.

However, there’s no Walkley award for “cranky former ministers want their jobs back” or “Peta Credlin doesn’t like the current makeup of the Cabinet”.

But if a senior minister, or indeed a cabinet minister, anonymously called for an immediate cabinet reshuffle, the journalist would describe them as such. Using the term “senior conservative” is more often than not just a journalist’s embellishment of a disgruntled backbencher to generate a better headline. 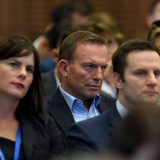 Similarly, a “conservative minister” does not mean a cabinet minister, a source close to someone can often mean the actual person who doesn’t want to put their name to the comment, while a “senior source” could be almost anyone.

This is the opposite of what good journalism should be. Instead, the media should be helping voters to detect and interpret the lies and obfuscation peddled by politicians during leadership tussles.

It must be said that at least the media is at least doing a better job reporting the veracity and consistency of Tony Abbott’s claims and counterclaims in recent times, if not those of his supporters.

Journalists are now more likely to question Mr Abbott’s claim to simply being a conservative standard-bearer and not a wrecker, now that his policy prescriptions have moved from stridently conservative to alarmingly populist and unrealistic tests of Mr Turnbull’s legitimacy.

However, Peta Credlin’s claim that Mr Abbott does not want to return to the prime ministership did not receive the same level of scrutiny.

Ms Credlin argued that Mr Abbott was a “career conservative” who chose public life because he saw it as a vocation, and that despite “millionaires and billionaires” offering him “sinecures to leave”, the humble backbencher simply wanted to “try and get through what has now become a very tortured three-year period”.

In media reports of these comments, little or no mention was made of Mr Abbott being the main source of that torture.

Similarly, breathless reports that the former PM had told colleagues he would stay in politics to help “pick up the pieces” when Mr Turnbull’s leadership fell apart, mainly avoided the obvious inference that Mr Abbott would not desist until Mr Turnbull was defeated.

There has also been a litany of familiar euphemisms this week, which cynical journos take with a grain of salt but still report unfiltered to unwitting voters.

It’s inevitable that journalists know more about political developments than they let on to their audiences – there are simply too many players and moving parts to explain, and very little time or patience on the part of the viewer, reader or listener.

But when it comes to leadership battles, it’s incumbent on the media to provide as transparent a picture as possible of the combatants and their motivations.

This means being less willing to be co-opted by repeating politicians’ obvious distortions and confections, and more determined to provide a public service by exposing the actual power play.

‘We’re not getting the whole truth about the Liberal Party’