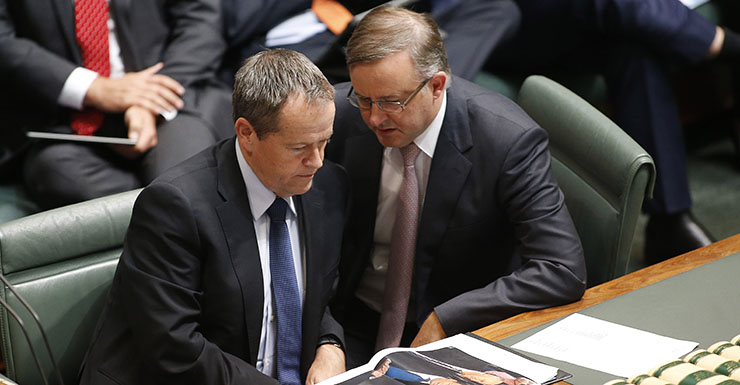 Labor frontbencher Anthony Albanese has dismissed suggestions he is after Bill Shorten’s job after giving a speech that appeared to criticise the opposition leader’s budget reply.

Mr Albanese said the speech – in which he argued Labor should “celebrate” the Turnbull’s government’s “ideological surrender” – was cleared by the opposition leader’s office.

“I think what I said was perfectly consistent with what Bill Shorten did in his budget reply,” he told reporters in Fremantle on Thursday.

“Indeed, the speech was given in advance to Bill Shorten’s office.”

Mr Albanese’s comments follow another intervention earlier in the month when he slammed a controversial Labor ad starring Mr Shorten.

He called the “Australians first” TV spot, which was branded “racist” over a lack of diversity, a “shocker” that was “not the sort of ad I want my party to be promoting”.

Mr Shorten, who starred in the ad, subsequently called the ad a “bad oversight”.

Earlier on Thursday, Mr Albanese had said the 2017 budget was an “overwhelming victory for the Australian Labor Party and the broader labour movement”, and that the opposition should “celebrate our victories”, marking a split from the approach taken by Mr Shorten in his budget reply.

“It was the budget of ideological surrender,” Mr Albanese told the Transport Workers National Council on Thursday.

“After years of negativity and culture wars, the Coalition used the budget to offload much of its ideological baggage and embrace Labor values on some core issues – at least at a superficial level.”

While the government’s economic vision has been labelled “Labor-lite”, Mr Shorten has described it as an “admission of guilt”, emphasised it was “not a Labor budget”, and vowed to oppose many of its key measures.

“This isn’t a Labor budget – and it’s not a fair budget,” Mr Shorten said in his budget reply.

Labor, under Mr Shorten, has said it will oppose the government’s increase to the Medicare levy for all Australians – instead arguing the hike should only apply to Australians who earn over $87,000.

The opposition will also oppose a long list of other budget measures including on schools funding, universities and the removal of the deficit levy on high-income earners.

But Mr Albanese said the Coalition had “finally accepted that Australians support universal health care”, and noted its support for needs-based school funding, the NDIS and infrastructure spending.

“That’s the good news. But the bad news is that while the Coalition has raised the ideological white flag, their rhetorical conversions have not come with investment,” he said.

“The way forward for Labor is to accept their rhetorical conversion and triple our pressure for investment, while continuing to argue the case for further progressive reform.”

It comes as greater scrutiny begins to fall on Labor, which has found itself in an election-winning position across the past 12 Newspolls.

Ms Plibersek was favoured by 30.7 per cent of respondents while Mr Albanese came in second with 26.2 per cent, followed by Mr Shorten on 26 per cent, according to the ReachTel-Seven survey.

Following the ad controversy, Mr Albanese “absolutely” ruled out a challenge when asked to do so in an interview on Sky News.

“We have our leader, I’m part of the team and I’m very happy staying in the job I’m in,” he said.

Labor Party rules render a leadership challenge very unlikely, with a contest only triggered if 60 per cent of the Labor caucus sign a petition asking for a new election.

In the 2013 leadership contest, Mr Shorten claimed victory by dominating the caucus vote (55 MPs to 31), despite Mr Albanese’s comfortable lead among the party membership.

Albanese shrugs off those persistent whispers that he is stalking Shorten