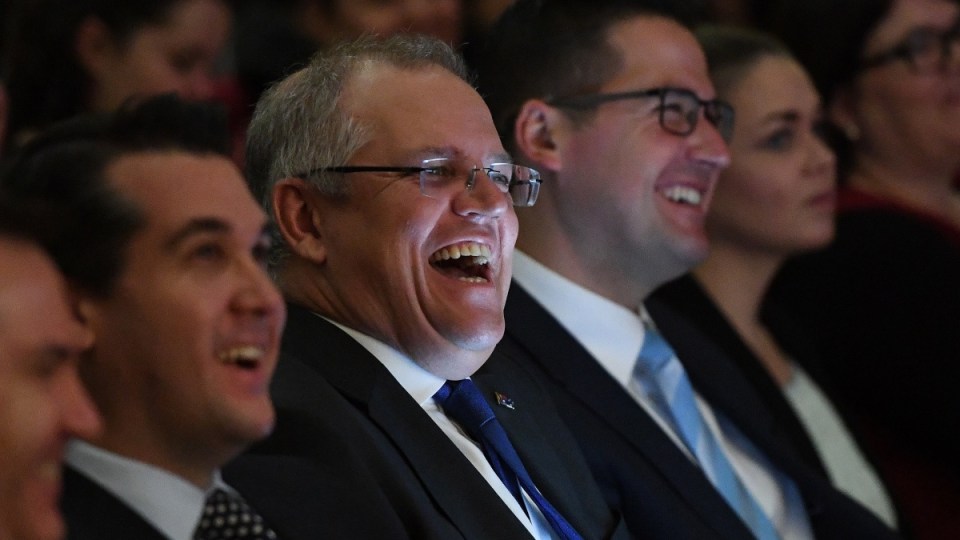 Scott Morrison has emerged from hiding with a smile on his face. Photo: AAP
analysis

After being conspicuous by his absence for more than a fortnight, Treasurer Scott Morrison emerged from the Treasury bunker this week to deliver a speech aimed at shaping how the federal budget will be reported by the media.

The speech contained a lot of econobabble for the pointy-heads who turned up to hear the Treasurer, but there was also an Abbottesque cut-through message that was crafted specifically for the news media.

Noting that budgets of the past had not made a distinction between “good” and “bad” debt, Mr Morrison flagged that next month’s budget would make it easier to distinguish between the two by linking government spending to the level of debt it created.

Achieving community support for a budget is as much about marketing – perhaps even more – as it is about sound economics. If a government can’t present the thousands of pages of numbers, portfolios and programs in a few compelling soundbites, then its opponents will happily fill the vacuum.

Of course, the substance of a budget must match its rhetoric. The first Abbott budget became a slow-moving train wreck because it didn’t deliver Treasurer Joe Hockey’s “end of entitlement” reforms. And the first Turnbull budget failed to convince voters that Mr Morrison’s “Plan for jobs and growth” contained any actual plans.

One advantage that the good debt/bad debt framing has over those previous budget motifs is that the Labor opposition will be secretly grateful that Mr Morrison is trying to put an end to the enduring Australian myth that all government debt is bad.

This myth is a carry-over from the Howard years, when that government was swimming in mining company taxes and used its bounteous surpluses to bribe voters with middle class welfare while criticising Labor governments for only being able to run up debt.

Tony Abbott sharpened that criticism as opposition leader, using one of his most potent slogans – the “debt and deficit disaster” – to ensure the Rudd government got little credit for shielding Australia from the GFC because the stimulus spending increased debt. The same applied to Julia Gillard’s vaunted but expensive Gonski and NDIS initiatives.

Mr Howard and Mr Abbott managed to create a seemingly immutable connection in voters’ minds between poor economic management and government debt. Even now, voters think Labor is a worse economic manager than the Liberals due to perceptions of Labor’s profligacy.

However with next month’s budget, Mr Morrison will ambitiously try to break that nexus. And in creating two types of debt to get himself out of a pickle (Australia’s debt and deficit are higher now than under either Rudd or Gillard), he is setting a precedent that Labor will be able to use when it returns to government – whenever that may be.

This explains the Opposition’s weak criticism of the approach. The best it could do was to complain that Mr Morrison had gone missing for 17 days and had little more to show for that time than a changed line in the budget papers.

Behind the scenes, Shadow Treasurer Chris Bowen is probably wishing he could buy ScoMo a beer.

It appears even Tony Abbott is sticking to the Treasurer’s good debt/bad debt line. For now.

However it does not suit the former PM for the budget to be seen as a success. Mr Abbott reportedly told friends he expects it to fail, and that this would increase momentum for a leadership change.

ScoMo will nevertheless be grateful for getting his communication mojo back at a time when it has completely deserted Malcolm Turnbull.

The PM is playing a high-stakes game by dabbling with voters’ expectations on energy prices. First he promised more reliable and affordable electricity, and then this week seemingly misspoke with a claim that gas prices would halve due to the government forcing gas suppliers to retain product for the domestic market.

Mr Turnbull reportedly spent all day Friday ringing media outlets to explain they misheard him and he had made no such promise. Unfortunately for the PM, the inferred commitment cannot be unheard.

The Treasurer may have managed to de-fang Labor with his good debt/bad debt play, but Mr Turnbull has exposed another weak spot for the Opposition to poke. If Labor can convince voters the PM is all talk and no action on energy, the resulting electoral retribution will be swift, and it will be brutal.

Scott Morrison has finally got his mojo back