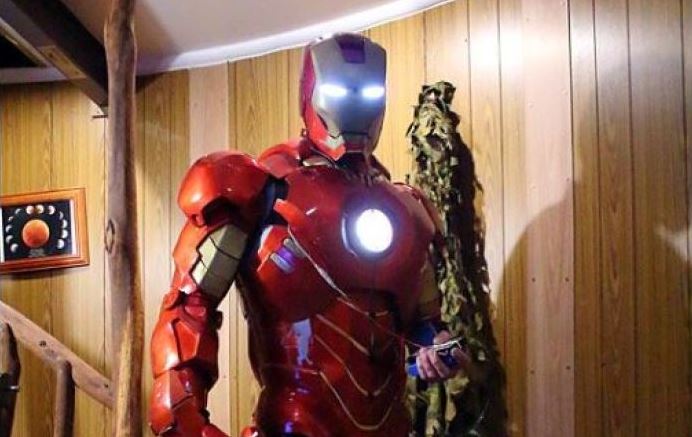 Barry Armstead’s four-year backyard workshop project to build a replica Iron Man suit is complete. He has spent much of his spare time over that period tinkering away in his man cave, building the superhero suit.

The Canberra father of four is now ready to give sick children in hospital something to smile about.

“Every available bit of time I’ve had I’ve used to work on the suit — usually late into the night.

“I’ve also started doing some blade-smithing and selling knives, which has helped to fund the final stages of the project.”

With the electronics now complete, the finished product will be unveiled at a Starlight Foundation charity event on May 6 at the Tuggeranong Hyperdome.

“I’m pretty nervous about taking it out after all this time to be honest,” he said.

“It’s now equipped with an arc reactor in the chest, an automated faceplate in the helmet with a lip-activated micro-switch that makes it go up and down.

“There’s also a wide-angle camera mounted between the eyes which displays on video glasses inside the faceplate.

“That way I’ve got a nice wide-angle view so I don’t go tripping over kids in hospitals.”

The suit has also been fitted with a voice-changing speaker set in the chest with a microphone in the chin of the helmet.

“That changes my voice once the faceplate comes down giving me a robotic voice,” Mr Armstead said.

“My young fella is suitably impressed.”

The suit is made of steel sheets less than a millimetre thick and weighs 37 kilograms including the electronics, batteries and padding.

“It’s not as heavy as it looks because the weight is distributed over my whole body,” Mr Armstead said.

As the internal suit includes a full wetsuit, Mr Armstead welcomed the cold change in Canberra this week.

“You get quite hot and sweaty wearing the suit … it’s certainly not a summertime thing.”

Mr Armstead hopes the Starlight Foundation event will be the start of many more charitable outings for the suit.

“The Starlight Foundation is about enriching the lives of sick kids and that’s why I started this whole project — to put a smile on the faces of sick kids.”

The idea was born while spending many hours in the neonatal intensive care unit at the Canberra Hospital after one of Mr Armstead’s children was born two months premature.

“We did spend quite a lot of time in the hospital and saw a bit of what was going on with the other kids around the place,” he said. “If I can make kids smile, it’ll be mission accomplished.”
– ABC