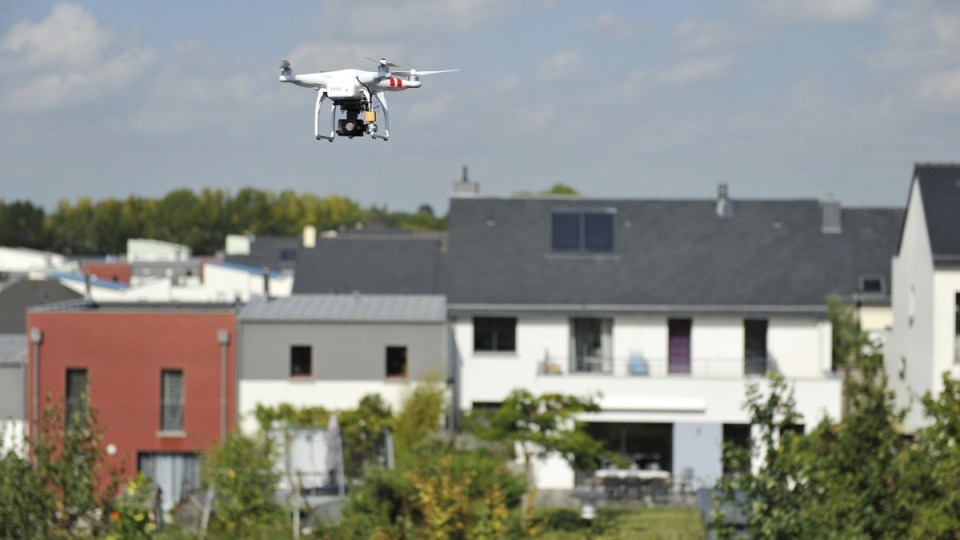 Could a drone be watching you in your backyard? Photo: Getty

Karli Hyatt went for a discreet late-night swim in her backyard pool after returning home from the gym last week when she heard a distinct “buzzing” sound.

The skinny-dipping Darwin resident glanced up to find that, to her surprise, she was not alone.

She watched as a sizeable drone with red and green flashing lights flew into her backyard before hovering directly over her, about 10 to 15 metres above the pool.

“There was the initial shock and then, as the days passed, I grew concerned that it might be a neighbour and it’s made me question, how private is my backyard really?

“My fences are really high and secure and there’s big trees around the backyard, so it’s the last place you’d think your privacy would be able to be invaded.”

She said she now felt a “bit frightened” and has called for legislative change to better protect individuals’ privacy against new technology.

Ms Hyatt’s experience is not an isolated incident. Similar reports of drone encounters in private spaces continue to emerge as drone ownership increases in Australia.

Adelaide resident Karen Barker, 58, told The New Daily that a neighbour had regularly flown a drone over her backyard, with its high-pitched noise triggering the neighbourhood dogs to bark.

“He would continuously circle and hover, then move around,” she said.

“He was cautioned by police and told he would be fined next time. We have not seen the drone since.”

About two years ago, a Victorian woman was unintentionally photographed while sunbathing topless by a drone commissioned by a real estate company to advertise a neighbouring property.

Canberra University Assistant Law Professor Bruce Arnold, who has a strong interest in privacy, said the legal situation was confusing due to inconsistencies across Australia.

“In the absence of meaningful and consistent law reform, people will engage in self-help, whether by hiding from drones, drawing their curtains or turning off their lights, or by belting the drone with a hockey stick or shotgun blast.

“There are lots of drones, numerous incidents – few of which result in legal action – and meanwhile, use is increasing, and the technology is becoming cheaper, more stable, and easier to use.”

Earlier this year Germany passed laws to enforce that drones cannot be flown over residential areas if they weigh more than 250 grams. If the drone can broadcast or record video or audio, regardless of weight, flying it over other people’s properties is forbidden.

Sydney University law professor David Rolph, who was on the Australian Law Reform Commission Advisory Committee which recommended the introduction of a new tort of privacy, told The New Daily the main problem with drones was the “absence of legal protection”.

“If a drone flies into our backyard, we don’t know who is responsible for navigating it and it can’t be seen by anyone else,” he said.

“I think most people think they have more privacy protections than they do, that it’s a fundamental aspect of human dignity, especially in their own home, but it is not something that is recognised in our common law.”

When asked whether it was legal for someone to fly a drone above someone’s backyard, Professor Rolph said, “Well, it’s not unlawful.”

“Introducing a tort of privacy would confirm our legal protections and give victims grounds for seeking compensation,” he said.

“There is a general understanding that ‘your home is your castle’ and free from interference without a warrant or genuine reason that others should be able to interfere with your private space,” said Brendan Gogarty, a senior law lecturer at the University of Tasmania.

“But people should be aware that they may be observed when outdoors, even in their own backyard.”