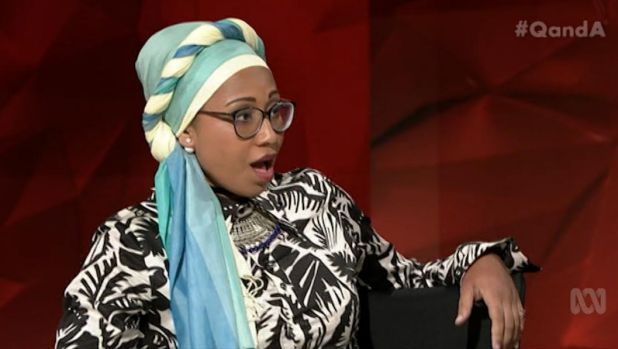 The ABC won’t take any action against Yassmin Abdel-Magied after the Muslim activist sparked outrage with an Anzac Day Facebook post asking Australians to also remember those on Manus Island, Nauru, Syria and Palestine.

The host of the ABC’s weekend program Australia Wide felt the wrath of social media users after posting: “Lest We Forget (Manus. Nauru. Syria. Palestine)”.

A spokesperson for the public broadcaster said the “part-time presenter” was also engaged in other activities that did not relate to the organisation.

“Her views and opinions in that capacity are her own and do not represent those of the ABC,” the spokesperson told The New Daily.

Ms Abdel-Magied later deleted her post and amended it to say “Lest. We. Forget”, before issuing an apology.

“It was brought to my attention that my last post was disrespectful, and for that I unreservedly apologise,” she said.

Despite offering her regret, the 26-year-old continued to cop a barrage of racial and religious abuse, with some commenters calling her an “absolute disgrace” and a “nasty horrible person” for the post fired off to her more than 48,000 followers.

“Hang your head in shame. You may have enjoyed the support of many Australians before this, but I assure you, today’s stunt has crossed a big red line for most Australians. Today was not the day to hijack for your political bullshit,” one posted.

Another said: “You disgusting piece of low life. Disrespecting our country’s veterans. You aren’t Australian. Go to hell.”

“Tens of thousands of Australians, from all walks of life, have gone to war and paid the ultimate sacrifice. Today, we pay tribute to them – not seek to use their sacrifice for cheap political point scoring as Ms Abdel Magied has done,” he said in a statement.

“The freedom she enjoys to make such disrespectful comments is what the people whom we commemorate today fought and died for. But that is where self-discipline, respect and decency need to be added into the equation, something Ms Abdel Magied has displayed she lacks.”

However, a select few threw their support behind the initial post’s political agenda: “…Today we remember the brave men and women of Australia who went to fight against the atrocities committed by others last century…and today of all days we should remember Australia is committing similar atrocities today!”

The Sudanese-born presenter, who grew up in Queensland, was a member of the Australian Multicultural Council, Federal ANZAC Centenary Commemoration Youth Working Group and the 2014 Youth G20 Summit.

She is known as a passionate campaigner for gender equality and in February courted controversy for declaring Islam as the “most feminist religion” during an appearance on Q&A, during which she had a heated clash with Jacqui Lambie.

Is it time to define new rules so that migration doesn't disturb the peace? @JacquiLambie & @yassmin_a disagree vehemently #QandA pic.twitter.com/nRXyj3p2hG

Former SBS sports reporter Scott McIntyre was sacked for his controversial opinions about the Anzac legacy in 2015.

He referred to the commemoration of Anzac Day as “remembering the summary execution, widespread rape and theft committed by these ‘brave’ Anzacs in Egypt, Palestine and Japan”.