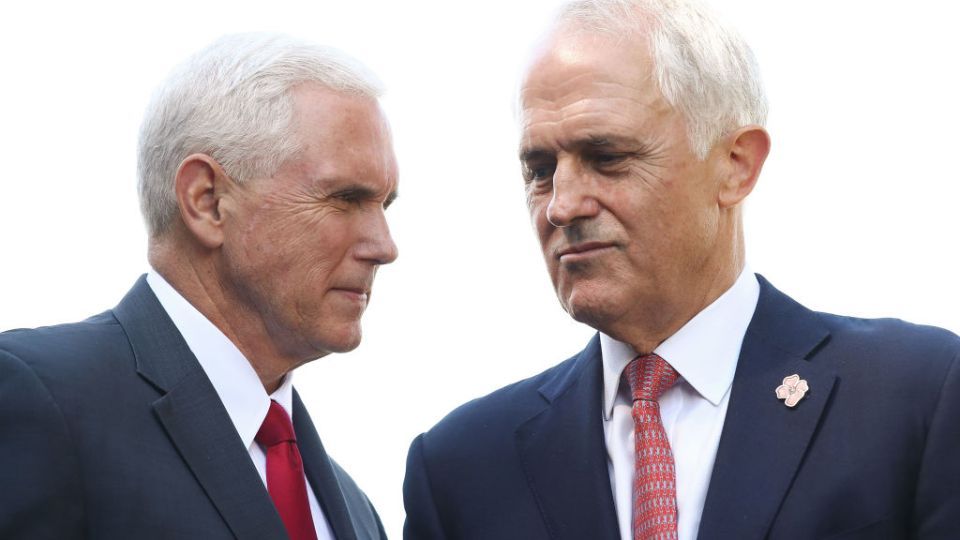 The threat of a nuclear North Korea has dominated high-level talks between US Vice-President Mike Pence and Prime Minister Malcolm Turnbull as both men urged China to exert greater influence on Kim Jong-un.

With tensions boiling on the Korean Peninsula, Mr Pence warned the Trump administration would consider all avenues to stop the regime’s development of nuclear weapons – and Mr Turnbull declined to rule out Australian military involvement if the war of words becomes an armed conflict.

Mr Pence, whose visit to Sydney marked the end of a 10-day tour of the Asia-Pacific region, also confirmed the US would honour a deal to accept refugees on Manus Island and Nauru, once described by President Trump as “dumb”.

Roads were closed throughout Sydney for the visit, which included a trip to Sydney’s Australian Museum with Foreign Minister Julie Bishop, and meetings with business leaders, Governor-General Peter Cosgrove and opposition leader Bill Shorten.

Outside Kirribilli House, on Sydney Harbour, armed US Secret Service agents patrolled the streets as the Turnbull and Pence families enjoyed morning tea.

Standing side-by-side for a joint press conference on the front lawn at Admiralty House, both men sought to pressure China to curb North Korea’s nuclear program.

“The eyes of the world are on Beijing,” Mr Turnbull said.

“We seek leadership from China to join the leadership shown by the United States and Japan and Australia.”

Despite praising Beijing’s moves to stop coal shipments to North Korea and impose travel sanctions, the Vice-President said “we believe China can do more”.

He also warned that if China did not act on North Korea, the US would.

“While all options are on the table, let me assure you the United States will continue to work closely with Australia, our other allies in the region and China to bring economic and diplomatic pressure to bear on the regime,” Mr Pence said.

“If China is unable to deal with North Korea, the United States and our allies will.”

Asked if Australia’s involvement could involve a military role, Mr Turnbull would not rule it out.

“We will work closely as we always do. At this stage the support that we are providing is at the level of diplomacy,” he said.

“And we are quietly confident that China will step up to this challenge and responsibility.”

Earlier in the month, North Korea launched a failed missile test, and threatened a “super-mighty pre-emptive strike” over perceived US aggression.

In the past few days, reports emerged that China had put cruise missile-capable bombers “on high alert” in response to the developing situation in North Korea.

While the Vice-President’s visit was aimed at reassuring US allies in the early days of the Trump presidency, the rising threat on the Korean peninsula gave the high-level talks greater importance, according to foreign policy analysts.

“We are on war alert with North Korea, so Pence has to reassure the Prime Minister about what happens next,” RMIT University security and international diplomacy expert Joseph Siracusa told The New Daily.

“We’re a millisecond away from an exchange of fire on the peninsula.

“This guy came to feel the Australians out. Now he’ll go back to the president, just the way Lyndon Johnson did for President Kennedy in Vietnam.

“Because when Trump says, ‘we’ll handle it’, that’s not exactly how it works. It will be handled through America and its friends and allies.”

Vice-President Pence also confirmed the United States would honour the refugee deal that sparked the infamous phone call between Mr Turnbull and President Trump earlier in the year.

Negotiated under the Obama administration, the deal is said to apply to 1000 refugees on Nauru and Manus Island, but has been described as “dumb” by Mr Trump, who campaigned on restricting immigration, particularly refugees.

The President reportedly blasted Mr Turnbull in a testy phone exchange for cutting the deal with a lame-duck president and expecting him to honour it.

“Let me make it clear, the United States intends to honour the agreement, subject to the results of the vetting process that now applies to all refugees considers for admission to the United States of America,” Mr Pence said.

But that did not mean “we admire the agreement,” the Vice-President added.